Recently, I decided to convert our field maps from Collector Classic to Field Maps to get ready for the new options available to the app. I thought the transition was going to be painless and I could use the original functioning maps with some modifications and upgrade of the basemap (NAD83 UTM). However, after I completed the process and attempted to use the maps in Field Maps, I got sync errors. What is particularly interesting, however, is that Field Maps did get the original offline sync replica from our server, but any subsequent sync operation would fail with "invalid start of json - expecting { or [" and the error log entry created  "Default Mar 10, 2021 2:54:51 PM Feature tiling disabled". I also tested the map with Collector (New) with the same issues.

It turns out that the hardened down IIS configuration was responsible. In IIS 10 / MS Server 2019 hosting ArcServer, all websites were configured with SSL (Always) and Certificates (Accept) to provide two factor authentication for all access, but still allow applications to "tunnel" if a certificate is not provided. This worked for Collector Classic, but prevented the subsequent sync operation in Collector (NEW) and Field Maps. Keeping SSL (ON) , but changing Certificates to (ignore) resolved the issue for Collector (NEW) and Field Maps. 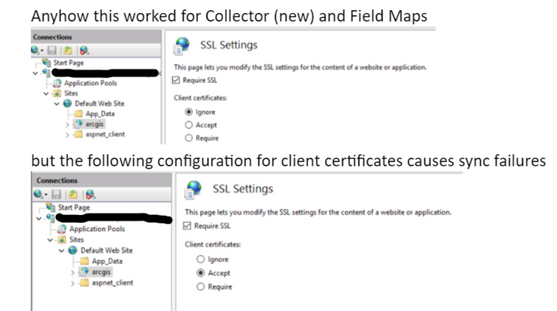 Portal 10.8.1 (located remote to above server - used for hosting the Maps and Vector Tile Service for the Map)

The Web Map was configured to use a user defined vector basemap side loaded to the device (Android). A copy of the vector tile package was loaded to Portal and hosted as a vector tile layer for use in the Web Map as the basemap to conform to the coordinate system requirement to match basemap to data. The map in Portal worked flawlessly and even worked flawlessly once downloaded to Collector (NEW) and Field Maps in the interactive mode. Only after a map was downloaded for offline use did the subsecuent sync operation fail, even though the child/sync replica was successfully downloaded to the android app.