Alright after 3 days of screwing around with this I'm stumped.

I've registered the SDE database and a folder \\gis01\gistemp (the folder has temp.gdb and both are open to "everyone" for read/write/modify)

In Arcmap I can make a model or python script, run it and it will work locally.  However when I publish it, it says successful but doesn't write data to either of the registered databases. If I run the service from the REST endpoint, it returns no records. If I use the service as a tool , no records.

As for code: I just created a model, dropped the buffer tool on it, had it use a FC from SDE and the output to the registered FGDB. For grins, I played with the exported Python code below, changed the connection string. The Model, both versions of the connection string work well in ArcMap. and create temp fc, however as a service they run successfully but don't create anything. I closed ArcMap, to avoid schema locks but hitting the rest service endpoint returns nothing,  I've even deleted the temp fc to avoid any conflict in using the service, I've also tried this using ArcMap on the server, without luck.

After a week of troubleshooting, one fc didn't have a defined projection, although it was in the right location arcServer had a problem with it. ArcMap was more forgiving in this, once I defined a projection it worked as a service.

I hear you Bill! I'm trying something similar and I keep getting as far as . . .

I'm getting this similar error on ANY GP Service I try and run including the buffer one I've tried!

First up, can you confirm that your ArcGIS server user actually has write access to the folder? The fact that ArcMap on the server doesn't work suggests that there may be a permissions issue there.

Can you see any output in "C:\arcgisserver\directories\arcgisoutput" on the server while the tool is running?

Just piggy backing off Bill's thread here, but I have verified that the user does have permissions on our server.

I verified the folder has correct permissions, For grins, I copied the input FC to the file.gdb and write the output to the same file.gdb. As a model or script it runs. As a service it says it works but does nothing. I delete the output fc before I try to run it. I also close arcmap and arcCat. After running nothing is in the folder.

I've also reinstalled ArcServer, and by putting the input and output in the same file.gdb I removed any issues that could have been in SDE.

Could you add some debugging? (psuedo coded below)

At the end add a parameter and republish the service

then any messages will be output to the results pane.

Have you done the following?:

Your issues may lie where you are trying to write the output. See the documentation, http://http://resources.arcgis.com/en/help/main/10.2/index.html#/Authoring_geoprocessing_tasks_with_...

I believe you need to have the entire folder structure in one location, see example below.

The original script is in the python folder and the script tool is in the toolbox. My input data and schema is in the Data.gdb and directing output to scratch.gdb.

Once this is published, it runs as a geoprocessing web service. Below is an example of the output on the ArcGIS Server: 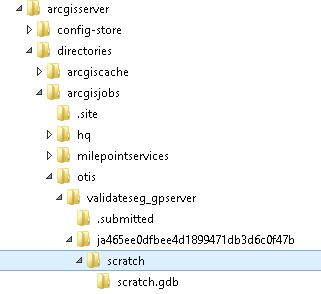 If you are using windows authontication in your connection files you should check that the ArcGIS Server user (the owner of SOC.exe) is defined as a user in your database.

Once I directed my output to a "scratchworkspace.gdb" on the AGS and registered the file location, I was in business!

Hope this helps someone else!