I have an AGS 10.3.1 with map services using registered database connections to a colocated Oracle 12c Ent. database as resource that has been working just fine for months. It uses windows authentication with web administration configured thru a webadaptor on a federated network. I'm not sure what's causing it but I know that several Windows updates were pushed to it within 24 hrs before the issue appeared. The Oracle Database was also patched with an Oct '17 patch a day earlier, but was rolled back after the issue appeared (to no avail). 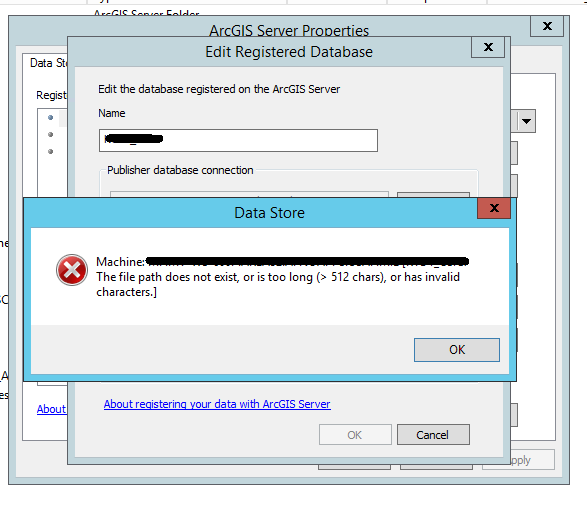 However, ArcCatalog cannot edit the registered database connections without running into the same issue. It cannot even replace the failing connections with the ones it can connect to the database with because, as it appears, AGS can no longer use them. To be thorough in my question, Desktop is also installed on the same web server, so the server has both 32bit and 64bit Oracle client software deployed, and the 64bit is shown first on the PATH values. Recall that it has worked as-is for awhile.

I've searched for "The file path does not exist or too long (<512 chars), or has invalid characters." and found little info with resolution that would solve this. Any ideas?

Thank you in advanced.

According to ESRI support, after several tests on the server, the issue lies on the Oracle client software. I'll post whatever comes out of further investigations.

Has there been a resolution to this? I'm having the same issue.

Not yet, Andy. ESRI support has forced us to convert our Oracle database from CDB to NCDB before they continue to support us. I've reopened the case to see what else they come up with, but so far they want us to try registering database connections to the affected db from another ArcGIS Server, which Iv'e asked our DBA to clone it elsewhere where we have another ArcGIS Server. They also want us to ensure Windows updates match that of other working servers as close as possible to rule out other possibilities, and there are some differences in that the affected had failed Windows updates since last December, round about the time this started to happen. I'm debating whether to rollback those updates.

Meanwhile, I tried this post to see if I could manually register a connection to try and validate. To avoid the password encryption problem, I registered the needed database connections to that database from a ArcGIS Server that can reach it via TNS, then copied the connection folders to the affected server's config-store folder. I then realized that I've already tested ESRI support's suggestion and that we needed not clone the database after all.

The copied database connections loaded after a service restart, but they did not validate, giving off the same error in the logs. I've even copied the oracle driver, which works on the working ArcGIS Server to the affected one, and still fails the same way.