by StephenAtkins1
New Contributor II
Hello everyone.  I've been googleing this one for a couple of days with out much success.  I have a map with roads and cabins and the lake.  Everything is positioned properly and it looks good.  But it turns out they want it to be a mirror image to put up on a sign post.  So normally East would be on the right side of the page but now I need it on the left side.  North and South stay the same.  Is there any easy way to do this in ArcMap 10.1?  And before anyone says it... Yes I know this is crazy but I only do what I'm told.

Based on an earlier thread (on the old forums), I think you need to have a postscript driver for the printer. I checked our standard HP LaserJet's--no option, but a HP plotter had a "mirror image" option on the advanced tab of the plotter set-up.

I did find a way (thanks to a colleague) to build a reversed image using a map projection (Krovak), but I don't think it will reverse any symbols or text that you have.

by StephenAtkins1
New Contributor II
Thanks for the info.  Unfortunately I need the map parts reversed then I can move the legend and other text and images to the other side of the page.  I may have to save this as a JPG or such and just do everything in photoshop.
Reply
0 Kudos

Esri Notable Contributor
That's what I wasn't sure about. If everything needs to be reversed, then you'll probably have to do it via print driver. If you only need the geographic data reversed, you could try the Krovak projection. It was originally designed in the early 20th century for Czechoslovakia.

Here are general parameters to show a backwards US (and western hemisphere in general):

The parameters affect the 'look' of the projection in odd ways because the original projection has positive axes west and south, but the XY Plane Rotation parameter is the one that controls the flipping/mirroring of the system.

I realize this is a super old post, but thought I'd try anyway. I love the visual that the Backwards Krovak creates. I can't get labels to show this way, however. I assume this is because the labels are being shown on "top" of the layer, and I am viewing the "back" of the layer just because of the specifications of this projection (that make things appear reversed). I don't know if I have that right, but regardless, no labels (they work fine on this layer when I flip back to WGS 84, unprojected).

Any thoughts on this? Thanks in advance!

Hmmm, I don't know. Another team handles labeling! Are you building the labels in the backwards Krovak or...?

Below is what I'm looking at. It's two versions of the same layer. The first, in green, is straight from ArcOnline--it's not stored locally, and has not been reprojected, so I assume that means it is just being projected on the fly to match the data frame (where I've set the Backwards Krovak). The second one, just the outlines, is the exact same layer, I just exported the data using the data frame's coordinate system (so again, the Backwards Krovak) and now it is of course stored locally.

Features are labeled as you'd expect, just using the State_Name field. No other label expressions going on. I tried something similar with a world countries shapefile, and once again, only a select handful of labels were shown, and they were all over the place in the wrong location.

Since I feel like I'm playing with cartographic fire here, I really wouldn't expect the labeling to go smoothly, but I am curious why it shows as it does. It would be neat if I could get it to work.

If you have any thoughts, or can pass this inquiry along to the labels team, that would be awesome! Thanks for your initial reply!

Follow up question, if you'll have it: If I wanted to display some other county backwards, would I just play with the LAT and LONG center parameters to center over wherever I'm interested in? Or are things more complex, and I'd need to somehow figure out what the azimuth and rotation would be changed to as well? 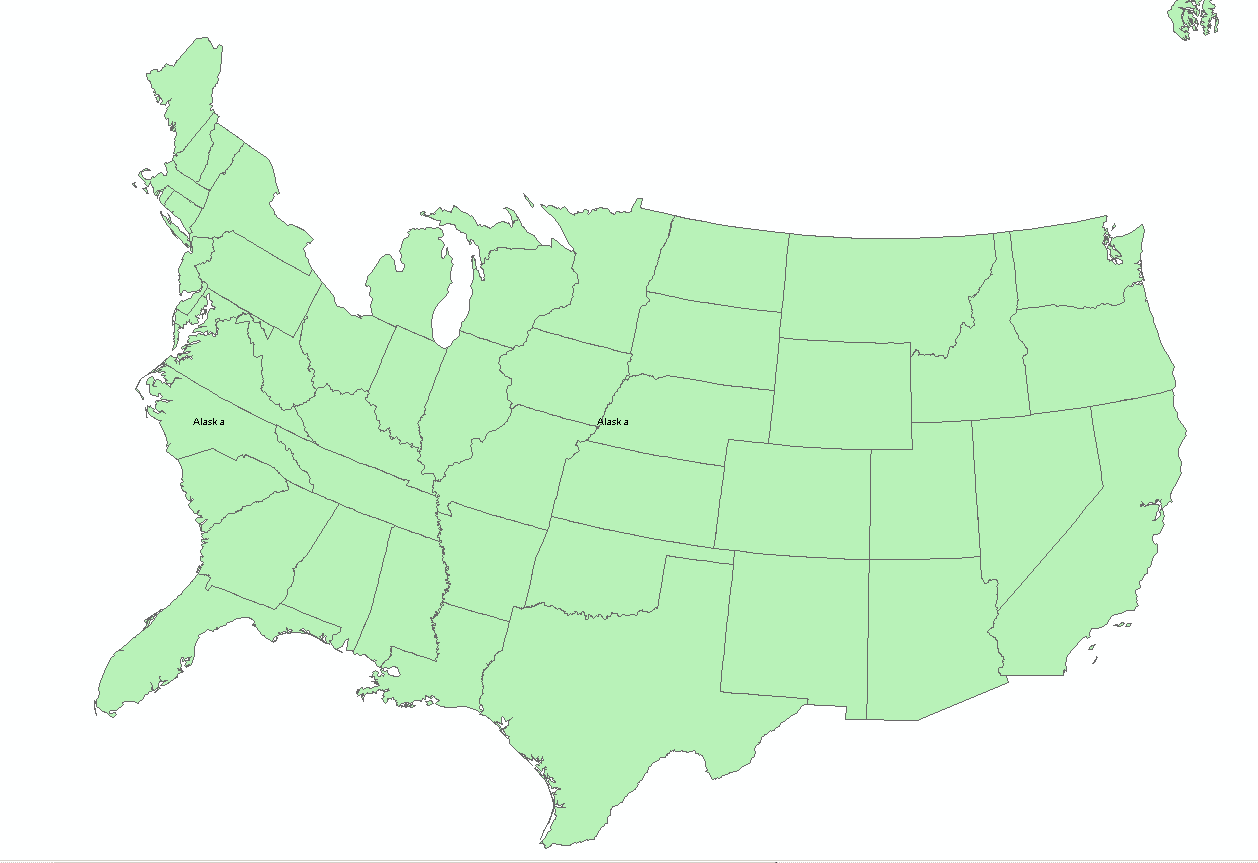 I'm sorry that I didn't respond sooner. Which software and version? (Pro / ArcMap) If you have Pro, could you try it there too?

by WilliamMortimer
New Contributor III
Not sure if this idea will fully work for you application.
Depending if you need a full mirror/invert eg negative or just mirror.
How about grouping everything together and using the flip/ rotate command in layout along the vertical axis etc.
Data frame tools also can rotate.
Or
You could also just export your map to a raster format and then use the raster 'mirror' toolbox function and a similar page size/data frame etc. The mirror tool was located in the:
Data Management tools/Projections and transformations/Raster/Mirror in 9.3.1.
Some ideas there anyway.