How To Determine Installed .NET and C++ Runtime Versions

How To Determine Installed .NET and C++ Runtime Versions

ArcGIS Desktop and Pro have system requirements with Windows, specifically .NET and (for desktop) Visual C++ Redistributable runtime. Note the Can you run it? app linked from the system requirements pages provides lots of useful information, but it only checks for .NET, not the VC++ Redistributable.  (If you attempt an install with required software missing, you are likely to have a failed install with the message of components missing to be found in the windows installer logfile. Easier to check first!)

Here is how you can find out whether your version is up to date to the one listed in the system requirements for the software you wish to install.

After .NET 4 this has gotten a bit more complicated.

Open a command window and enter:

Release is the release number, unfortunately from reg query it shows up in hex code. Using this web page you can quickly convert the hex number 707fe to 460798 which corresponds to .NET 4.7 (on my particular OS, I told you it was complicated). Also you could search this same key using regedit (which will show you the decimal value) but I'm a fan of command lines -- and you may have regedit turned off by your security settings.  I'm sure Version is also a useful thing to check but based on the fact that Microsoft set up a web page with the hex code lookup, it's probably right but it may not be as trustworthy as it looks.

Reference: How to: Determine Which .NET Framework Versions Are Installed

This one is easier.

Open Add and Remove Programs and look for Microsoft Visual C++ Redistributable. The installed versions will be listed there. This screenshot is from Windows 10. 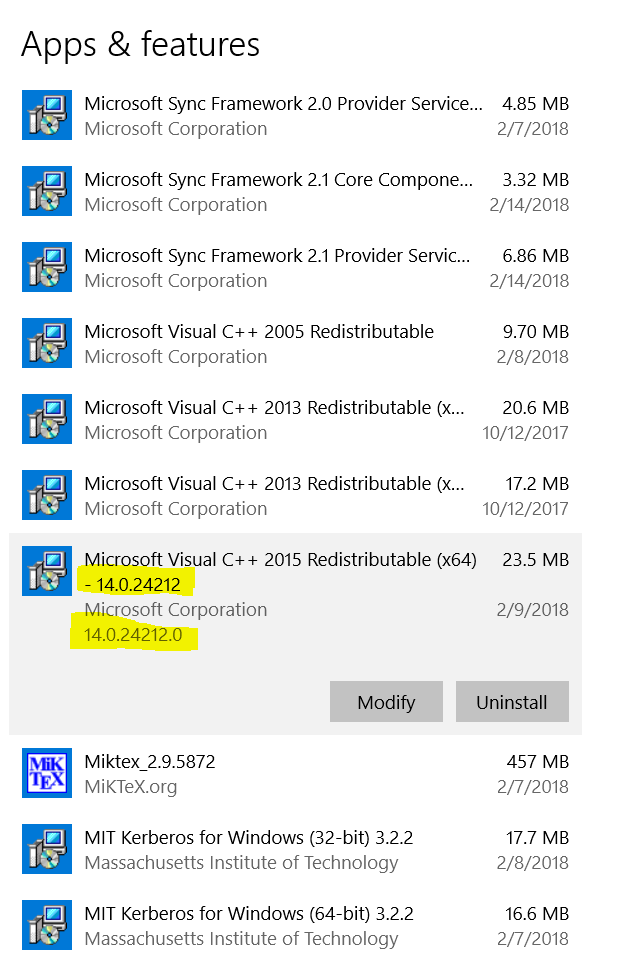 I think the best way to handle this is use setup.exe instead of setup.msi. This will auto-update the VC++ package if needed.