Hi. Geodatabase attachments are causing us big problems when syncing. As a workaround I want to prevent my users from viewing or editing attachments, and just download & sync features and related tables.

I can configure my web map layer's Pop-up to not "Show feature attachments as links". Then the "Show details" pane of a selected feature truly does not show the attachments. However, if I place a new feature or edit an existing feature Collector still allows me add attachments. And that's a problem because in my case any following Sync operations will fail.

How can I configure my ArcGIS Server Service and ArcGIS Online Web Map to prevent the addition of new attachments? (I can't delete all attachments, still need them in the geodatabase.) 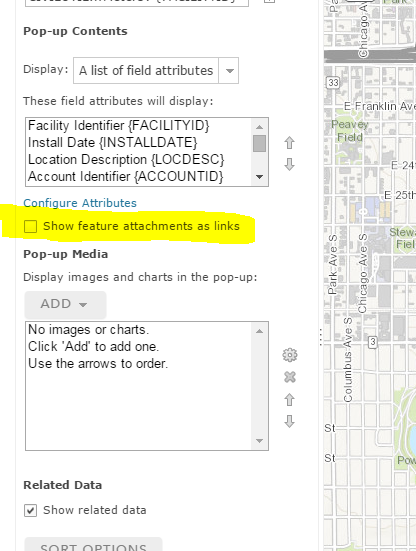 It seems that the root cause is sync error issue. What do you see in your ArcGIS Server debug log when sync fails? Do you use iOS device or Android device? Have you tried to capture web traffic in iOS/Android during sync?

Thanks for your reply Miaogeng.

It seems that the root cause is sync error issue.

You are right. I have an open esri support call to help me either solve that issue or get it acknowledged as a current bug. In the meantime I'm hoping to use Collector without the attachments because it still is very useful for us. (Thanks for all your work on it!)

What do you see in your ArcGIS Server debug log when sync fails?

No obvious error messages. But no existing attachments are ever downloaded, and when I add a new attachment Collector states: "Unable to update feature" followed by "Posting Attachments...", which it will state until I shut down and re-start it. (If I don't include related tables, then attachments work as expected.)

Do you use iOS device or Android device?

For now primarily Android, because I run into issues with related tables on iOS. (If I don't include related tables, then attachments work as expected.)

Have you tried to capture web traffic in iOS/Android during sync?

Have you seen it working to have a versioned ArcSDE feature class with attachments enabled as well as with at least one 1:M related table in Collector, offline mode? Wondering whether my problem is caused by the software or by my workflow/environment.

I have tried with 1-M related table with 10.3 Server. It has versioned ArcSDE and attachment. It syncs fine.