Set up field to auto populate with the next sequential number or a unique ID for new features. So that there is a unique ID for each new point captured that the user can visibly see. It could be like the object id, but needs to be a visible field that is read only in the collector form. ArcPad lets you set up a field that auto populates with the next available number with the option to start from a specific value.

Thank you for submitting this idea. To better understand your needs, could you expand on what this field is needed for? How does this field differ from the ObjectID field? How many separate editors would be working on the same project? Any additional information you can provide would be helpful.

I can relate to Amy Steiger's request.  For my company's workflows it would be nice to have an auto-numbering id field that can be created while in the field.  For the most part it would start over for each project and the ObjectID field would not give you that functionality.  Also, if we need to export the features to a shapefile for a client the ObjectID will not export with it (not consistently anyway).

I would like to have the ability within Collector to have an auto-number field but with the option to concatenate the contents from an existing field or a default string. An example would be the following. If I had a column indicating the classification of, lets say, manholes...(Storm, Sanitary)...If I collect a point and designate it as a Storm manhole, the auto numbering column would automatically store the value of "Storm_1" or a user designated start value.

This also important for creating related tables... If you can't use an ObjectID to create the relationship (not compatible with Sync), and you can't use the GlobalID (also not working)... then having the option to add an automatic sequence is even more important... Might also be nice to be able to concatenate as above... could add in User for disconnected scenarios to avoid potential overlap (i.e. 2 users both collecting Storm_1 in the above scenario).

Hi Scott, possibly a couple - say 3? They could be using the same AGO login or we can set them up with 3 separate ones.

Can you make the object ID visible in the collector form?

I just commented there as well to see if using NextSequenceValue would be an option for some of you looking for this functionality:

Has anybody on this thread tried using NextSequenceValue in Arcade to make this work on the feature service in Collector?  Data Functions | ArcGIS for Developers 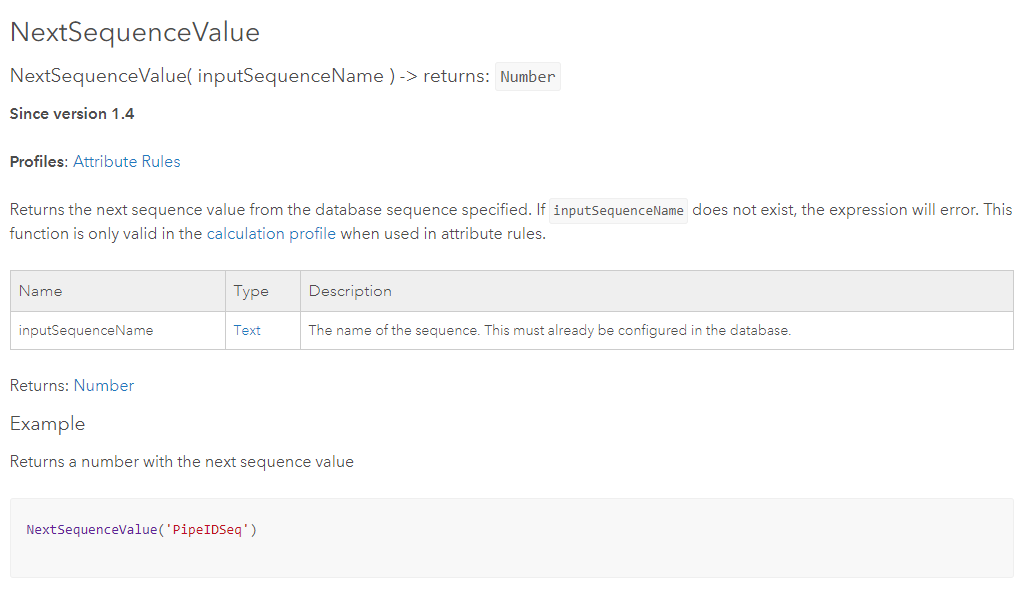 Because that function relies on already having a sequence configured in the database, I think you'd have to be working with an enterprise geodatabase, with the service referencing the data (i.e. not a hosted feature service).

This is an essential feature.

I just lost two full days of time trying to figure out how to do this in Collector, finally learning from ESRI that this is not possible. The auto-populating of features exists in other programs that we have been using since 2008, such as ArcPad.

Why is this essential?

In our work, recording points, lines, and polygons, we minimize data entry in the field, because completing long forms on mobile devices in the heat, the cold, the wind, standing in mud, being attacked by mosquitos, while struggling to read a computer screen in bright sunlight requires quick and easy data entry.  An auto-populated ID field, with incrementing numbers, will give the point, line, and polygon a unique ID number. We write that ID in a hand-written rite-in-the rain notebook, so we can associate written field notes, and multiple digital photo filenames, with the point, the line, or the polygon.

The ObjectID does not do it for us. I opened a case with ESRI, in which it showed us the ObjectID number in a Collector Popup, but that only worked on ArcGIS Online. Even then, I could not use it to auto populate and ID field. Once the map was put on Collector for ArcGIS, it no longer worked, by not showing the ObjectID number.  As ESRI told me, in response to a case I opened about this:

“Per our phone conversation today, the Object ID field we made visible in the web map popup window wasn't showing up in the Collector edit popup window. You wanted it in the edit popup window because your team wanted to hand write that object id in their paper notebook at the same time.

As we discussed, this will not be possible in Collector. The Object ID isn't officially stored until the feature is submitted so it won't show up in the Edit popup window."