With the CityEngine web-viewer being deprecated and the Scene Layer Package being the new recommended choice (overall, which I am excited about), do any of you have experience with this workflow?    I am particularly interested in anyone's experiences with terrain exports.

So then I tried converting my buildings to geodatabase multipatches and upload that to Scene Viewer and it looks good.  But this does not include my terrain or basemap so my models float in the air.  I make a lot of edits to my terrain so I don't want to use a premade terrain or  basemap.

I can create tile packages for my basemap and terrain (with the ArcGIS Online tile format, including LERC compression) but I cannot find a way to upload my basemap/terrain to SceneViewer as a tile package.  I have tried converting it to different coordinates and projections to get it all the same but to no avail.

A quick note,  I do not have access to ArcServer to troubleshoot.  I saw that there could be issues with certificates (that I do not understand) that requires a certain setting to be enabled to allow for local server tile data caching (?...I think this is what I read).  For those with success, was this the culprit?

Any one got any tips or tricks on the CE to Scene Viewer online workflow?

Hi Brian, I'm not sure on what your issue is, but I've added a lot of tile packages and scene layer packeges directly from CE, then I add it as an item on Enterprise or AGOL.

On less I'm misunderstanding you question, it should be an easy way to go.

If' you want to share terrain from PRO, you'll need to add it to a scene drag it to the bottom where the Esri elevation are located, and right click on you layer and share as a web layer. That shouldn't be necessary to go that way though.
I hope it helps.

Thanks for the response!  I've tried this workflow but every time it gets hung up at the publishing to scene layer step.  When I try it directly from CE, I get a not enough credits error.  I am part of a massive GIS consortium so I was not trying to publish to ArcGIS online using credits, but I would like to publish to my organization's server or AGOL portal.

When I go to ArcPRO and try it,  I can upload the .tpk it to my organization's AGOL, but still cannot publish.  Thankfully, I've got a very capable GIS organization who I enlisted for help last Friday and I sent them a project package from PRO to use for troubleshooting. That has everything in the same local scene coordinates just in case.  I suspect the publishing hiccup is related to either my AGOL permissions to publish tile packages or a portal/ArcServer setup issue.

you did try to creating a scene layer package in CE, and then from the enterprise portal, you selected add item, and then it's hanging?

We did have a lot of issues in general with layer packages for our Portal.

Usually I did test my SLPK on both AGOL and Portal, and if it's working on AGOL, then it's an Enterprise issue (Most likely) We used a lot of Esri support to fix our issues, but it wasn't with CE.

So when you are trying to publish from CE, are you logged in to your Portal?
I haven't tried this, I always go directly to Portal, but if possible to do it from CE to Portal directly, then I can't see why credits are involved.

On Agol you'll need to be creator, and have credits, since the storage of data consume credits. I would first of all test it on AGOL, I would test if that workflow works on Portal, then I would contact Esri if it's not.

Packages are working for me both on Portal and Agol created from CE for me at this point, but it took very heavy Esri folks to solve our issues: 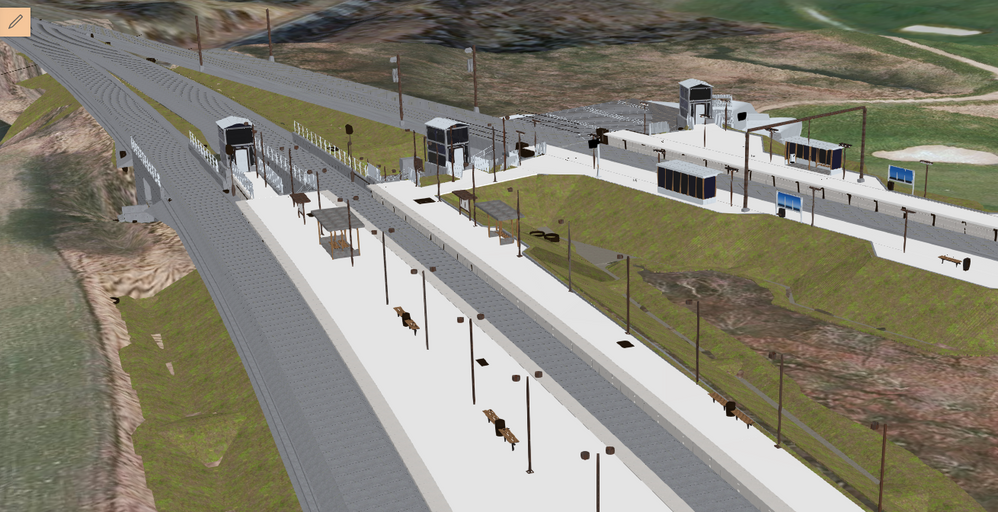 I think I mixed terms between AGOL and enterprise Portal, but I was only trying to publish to Portal at this time.   I am always logged in.  At this point I think it's out of my hands as I hope my GIS department figures out the solution on the backend.

I have a similar workflow, but a different problem. I export the Scene packages from CE and upload into ArcGIS Online (some are up to 5GB) Detailed Town layout, roads, buildings, people, street furniture, parks, industrial areas etc. With some static OBJ models. I built a Scene Viewer with several slides to navigate through the area. My problem is that when i zoom into an area the 3D models load, but disappears after a few second - switching parts on and off. See attached example of before and after. There is no consistency, it happens with all layers at all levels. Any ideas?