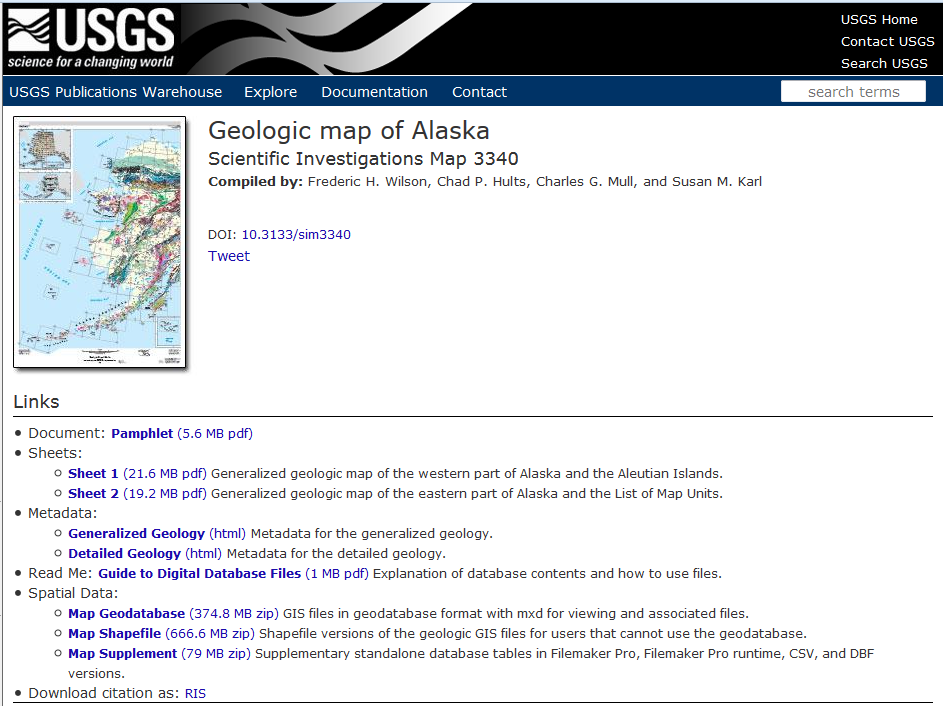 This map and associated digital databases are the result of compilation and interpretation of published and unpublished 1:250,000-scale and limited 1:500,000- to 1:63,360-scale maps. Covering the entire state of Alaska, it reflects more than a century of work by a host of geologists and almost two decades of compilation work. There are two versions of the map: a detailed digital version, and a simplified, “generalized” map for print. The map units described in the accompanying pamphlet reflect those of the detailed digital map. At the end of each unit description, the generalized map unit for that unit is listed.

Compilation of this map began in September 1996, using available 1:250,000-scale data to compile and release a regional map of central Alaska (Wilson and others, 1998). An ongoing iterative process was used to describe and correlate individual geologic units to produce the units for this statewide map and its interim products—a series of regional geologic map compilations—which were released as the process continued (in the references cited in the pamphlet that are shown with an *). As additional geologic data were acquired, previously released data, correlations, and interpretations were updated as needed. Compilation of this map was complex, because the original source maps were made by different generations of geologists, mapping with very different ideas. Several of the older maps were completed before the concepts of accreted (suspect) terranes or even plate tectonics existed. On the other hand, some of the more recent maps were so governed by terrane analysis that conventional stratigraphic nomenclature was not used or is obscured. We adopted a traditional stratigraphic approach and avoided use of the sometimes controversial and commonly inconsistently defined or applied terrane terminology.

Our decision to adopt a traditional approach is evident in a map that emphasizes the age and lithology of map units, rather than differences among fault-bounded packages of rocks. We did our best to resolve conflicting interpretations and map data from the regional compilations and from the individual source maps in areas where regional compilations had not been produced. We made every effort to preserve the original geologic map information, incorporating, where available, new data, but we were careful to not overinterpret the geologic data. Yet even our willingness to make interpretations and revisions did not enable us in some areas to resolve mapping conflicts or to reconcile different mapping styles. Therefore, there are several areas on the map where map units are separated by “quadrangle boundary faults.” More data and fieldwork may allow resolution of these conflicts.

This Alaska compilation is unique in that it is integrated with a rich database of information provided in the spatial datasets and standalone attribute databases. Within the spatial files every line and polygon is attributed to its original source; the references to these sources are contained in related tables, as well as in stand-alone tables. Additional attributes include typical lithology, geologic setting, and age range for the map units. Also included are tables of radiometric ages.