In previous software versions, the cell size was converted using a linear unit conversion when projecting from a Projected Coordinate System (PCS) to another PCS or an angular unit conversion when going from Geographic Coordinate System (GCS) to another GCS. So, projecting a 30 meter raster dataset from UTM zone 10N to WGS84 Web Mercator would continue to use 30 meter as the output cell size. When projecting from GCS to PCS or vice versa, previous versions took an average cell size based on the ratios of diagonal lengths in source and destination projections. Therefore, this method, currently exposed as the ‘convert units’ method simply copied the cell size from input to output, changing units if necessary.

This approach has some limitations:

The two new methods: ‘preserve resolution’ and ‘center of extent’ both are intended to calculate a projected cell size that doesn’t change the ground distance of the cell, thus avoiding unnecessary resampling during an implicit projection operation happening as a Spatial Analyst tool or a feature to raster conversion tool executes. You should use the ‘center of extent’ method when you know the geographic location where your cell size is most accurate. If you use this method, you can use a raster with a small extent in that same area as the cell size source or create a temp raster ‘around’ that location and use that as the cell size source. If you are unsure, use the ‘preserve resolution’ method. To learn more about the three cell size projection methods see How the Cell Size Projection Method environment setting works.

If you do not know at which specific geographic location your cell size is best but want to improve on the ‘convert units’ method when a projection is involved while working with Spatial Analyst tools, you can use the ‘preserve resolution’ method.

Why use the resolution preserving cell size projection method?

In the ‘preserve resolution’ method the same number of square cells as are in the original extent are preserved in the projected extent. The output cell size is calculated based on the ratios of the areas of the projected extent to the original extent. This approach is based on how Esri software currently chooses a cell size when moving from a camera image coordinate system to a geodetic (GCS or PCS) system. This method calculates the average size of a square cell more accurately for all combinations of GCS and PCS than the default ‘convert units’ method.

Since the number of cells remains constant for both cases, the ratio of the area of extent to the area of the square cell are equal, A0/ca0 = A1/ca1

In this method, the cell size conversion factor is, √(A1/A0)

Let’s take an elevation raster (R_input), located in Vermont (Figure 2), in a PCS (NAD_1983_StatePlane_Vermont_FIPS_4400) and project it to another PCS (WGS 1984 World Mercator) using the default cell size projection methods, ‘convert units’ (R_out_CU) and ‘preserve resolution’ (R_out_PR). Here both the spatial references are shape preserving, where the input spatial reference is suitable at a state level and the output spatial reference is suitable for the entire world. We will then compare the geodesic distance between the cell centers to determine which method preserves the geodesic distance more accurately. 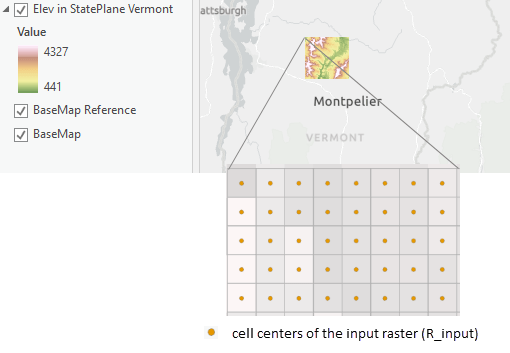 Figure 2: Location of the input raster (R_Input), its cell boundaries and cell centers.

Before we compare the geodesic distances between the two methods, lets understand what are the different ways a raster is projected in ArcGIS Pro. When you add a raster to the map in ArcGIS Pro, the spatial reference of the map becomes the same as the spatial reference of the raster. For example, if the first layer added has a NAD_1983_StatePlane_Vermont_FIPS_4400 PCS, the map will have the same spatial reference, and all other layers will project on the fly to match this spatial reference. This on-the-fly raster projection is meant for a richer display experience but does not preserve the raster structure (different cells can have on-the-fly-projected different sizes, rotations, and distortions). However, when you project a raster using the Project Raster tool or specifying the Output Coordinate System environment of a geoprocessing tool, the raster is actually  projected into a new raster structure (every cell is an identical rectangle in the output spatial reference, with sides parallel to the coordinate system axes). When measuring geodesic distance for the comparison of the cell size projection methods, it is recommended to use the actual projected raster instead of the raster that is projected on the fly.

In figure 3, the cell size of the input raster, R_input is 30 meters. This is approximately the same as its geodesic ground distance, which you can find out using the Measure tool in ArcGIS Pro. 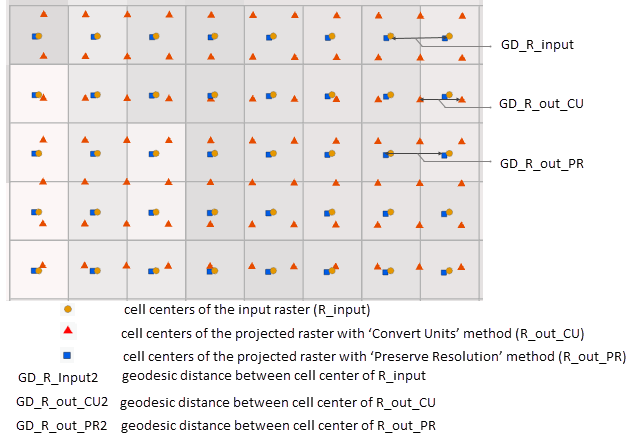 When the raster is projected using the ‘convert units’ methods, the projected cell size of the output raster, R_out_CU remains 30 meters, but 30m in WGS 1984 World Mercator is a much smaller distance on the ground, 21 meters. So, raster projection using the ‘convert units’ method has unnecessarily increased the resolution of the output raster. If we were projecting in the opposite direction (starting from WGS 1984 World Mercator), then we would have lost a significant amount of raster data. When the same raster is projected using the ‘preserve resolution’ method, its cell size becomes 42 meters and the geodesic ground distance remains 30 meters, which is the same as the geodesic distance of the input raster.

In this example, we will project from a UTM zone to its adjacent zone, which can happen when mosaicking together many different DEMs for a larger (state sized) area. In figure 4, let’s take a raster (R_input2) in WGS 1984 UTM Zone 11N and project it to its adjacent zone WGS 1984 UTM Zone 12N, creating output (R_out_CU2) and (R_out_PR2) for ‘convert units’ and ‘preserve resolution’ respectively. From here we will again compare the geodesic distance between the cell centers to determine which method preserve the geodesic distance more accurately. 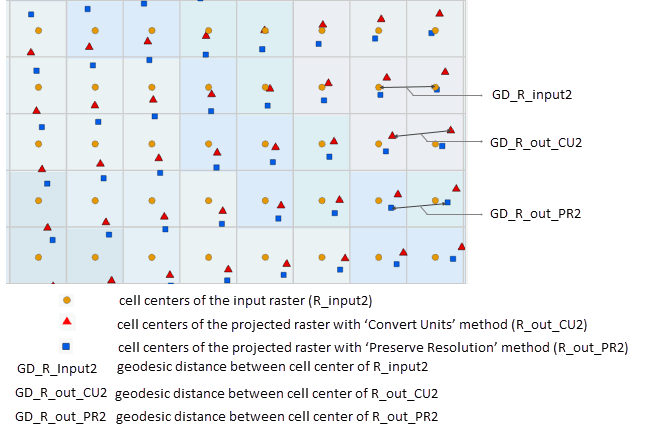 In both the examples, the ‘preserve resolution’ method seems to preserve the geodesic ground distance between cell centers better than the ‘convert units’ method. Other combinations of input and output spatial references may, of course, show difference between the methods, but overall it is safe to say that the ‘preserve resolution’ Method is a better approach for preserving geodesic distance while projecting datasets.

Next time you use a Spatial Analyst geoprocessing tool or python command to:

pay attention to the output cell size and consider using either the preserve resolution or center of extent methods. By default, the projection method will do the ‘convert units’, which existed in previous versions of ArcGIS, but as we have seen, this method may unnecessarily increase or decrease the resolution of your valuable raster data.

How the analysis window is determined in Spatial Analyst

This blog post has been prepared by James TenBrink, senior software engineer in the raster analysis group at Esri, and Sarmistha Chatterjee.

This content has been marked as final. Show 5 comments