Issues with S123 App on Android and Win10 apps

I am seeing two strange behaviours in a survey I have created when it is being used on both Android and Win10 Survey123 apps.

I have a form for Sidewalk inspections.  It has a the default hidden geopoint.

There are two separate repeats on the form to record distresses for two types of sidewalk materials. Each repeat has a geopoint. This geopoint is not always displayed, it is dependent on a Relevant clause as only certain distress types and ratings require a gps location to be collected.

In one of my distress repeats, I have a 'distress count' integer.

Reproducing the issue with my survey:

-Go down to the 'Record Concrete Distresses' section

-Choose a distress class of 'Distortion'

-Choose a distress rating of 2 or 1. This will trigger the location groups to appear

-Scroll down and enter any text in the house number field

-You will now see the distress count integer on the new repeat instance is blank.

If you were to choose a distress rating of 3 or 4, rather than 2 or 1, the Location (with geopoint) groups would not appear. Then when you click + to add a new distress you would see the distress count integer respects my default value of 1.

Identifying what causes the issue:

If you remove the relevant clause ${loc_calc_c}='Y' in row 77 (begin group line for grp_loc), then go thru the above process, you will notice the distress count will never fail to go to default value of 1.

I have tried moving this relevant clause around, and if I put it on JUST the geopoint record c_location (line 78) the issue still occurs. This says the problem is likely about the geopoint question itself, not the group.

-Go put in a distress that triggers the location section to appear. You can use Distortion / DCD / 1 as above. Put in a house number

-Submit the survey, either choose to send it 'later' (leave it in outbox) or send it 'now' (put it in Sent)

-Go to the Sent or Outbox as appropriate, and open the survey that was just submitted

-On the distress record underneath the gps point, you will see the values for House Number (as well as Location Modifier, Location Identifier and Location Comments) all appear to be blank

-Mysteriously, you can still add a new distress as if the required House Number value is actually NOT blank

-Some of these location attributes are referenced in summary strings I have made. If you scroll down to the bottom of the survey after opening it in Sent or Outbox, you will see the referenced house number (that appears to be blank) being displayed properly in the 'Review Entered Distresses' section.

Note this occurs regardless of the relevant clause that seems to trigger the distress count problem from Issue 1.

1) It looks like this is an issue when a geopoint in a repeat becomes relevant if it was non relevant previously.  I've filed an issue to correct this.

2) I'm not seeing the issue you describe- when I open a sent record for editing, I am seeing the house number data populated.

Thank you for the quick follow up and for verifying that item 1 is indeed a bug.

On the topic of item 2, to check if my feature service was behaving strangely I took the xlsx I sent you and generated a new survey, with a diff name, using Survey123 Connect 2.8.4 on Windows 10. I added the two csv files I sent in the media folder of the new survey. I published it to create the feature service.

In the Survey123 app in version 2.8.2 on Windows 10, I then download the survey and go through the process of submitting a record that triggers the grp_loc (Location Record) as being relevant, and specify a house number. I submit the survey. Upon opening it up in the Outbox, c_house_num is not being rendered in the textbox.

I changed the instance name of the form to include a reference to c_house_num.

After I submit the survey to the outbox, I can see that the house num is indeed being stored with the survey

Yet I open up the survey to edit and it is being shown as blank. However, a summary string which reference c_house_num DOES show the value. That summary string is highlighted in yellow 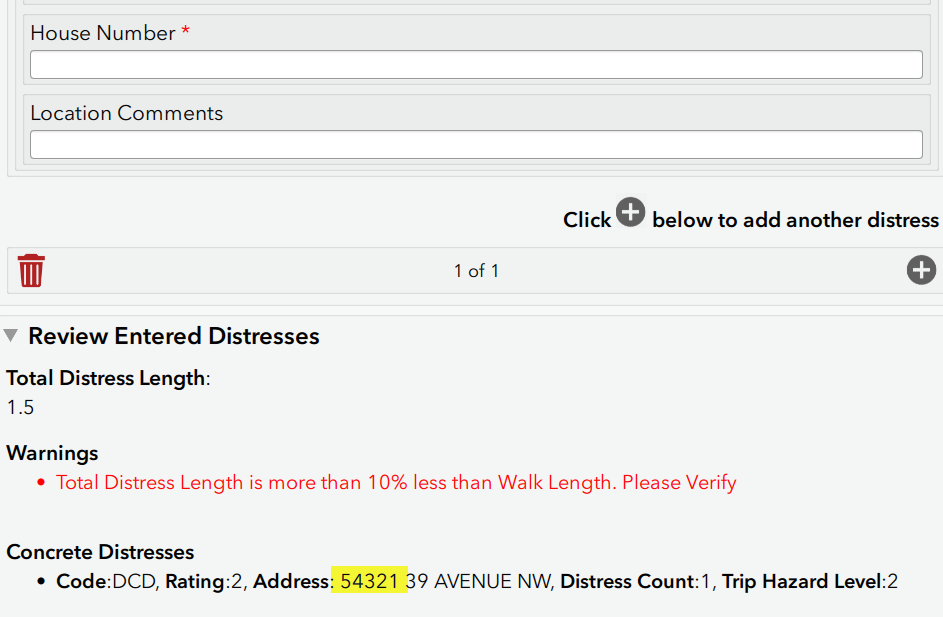 I can recreate this repeatedly

I found what appears to be the root cause

I am guessing you were giving the geopoint a value when you were testing, and so could not reproduce my issue

The House Num appears to only not be rendered if the geopoint widget is left to default 'no location' when the survey is submitted.

So if I go thru and submit the survey instance and leave the geopoint on it's default 'no location' state, the house num (and all following values in the Location groups) will be 'fake' blank when I open the survey in the outbox.

If i submit the survey with the other values all the same, but select a real location on the geopoint widget, the house num ( and all following values) will correctly render

Note if I move the house num box to above the geopoint widget, it will correctly render the value when editing the survey regardless of if i left the geopoint at 'no location' at submission time. This glitch only appears to apply to fields within the same 'group' (including within subgroups) as the geopoint [I had tested adding a text field to the end of the survey after all groups and repeats are closed, and it never had this issue. Only fields within grp_loc were affected] , and only fields that appear BELOW the geopoint in the group.