No matter the profile I use the GetFeatureSetInfo function returns a function not defined error in ArcGIS Online and the Arcade play ground. 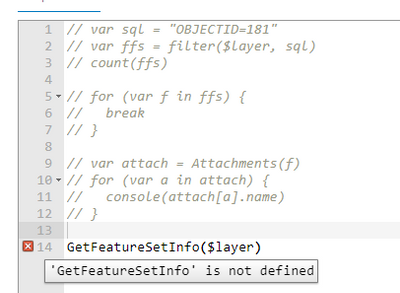 ESRI was able to reproduce the issue and it has been logged as a bug.

$layer originates from a feature service layer in a web map

is that the case? or should it be

$featureset originates from a feature class in a filegdb or mobilegdb

In this case, it just can't find the built-in function.  It never makes it to the point of checking for missing arguments because it doesn't recognize that the function exists (in a profile that supports said function).

In the new Arcade Editor, you don't see an issue until the code tries to compile.  Then you get the compilation error: "Compilation error - Line : x, y: Function not found".  It like calling a user defined function before you define it.

Is this function just Broken at the moment?  I think it might be.

perhaps yours isn't up to date

Yea I saw that as well.

This is the same error that you would get if you tried to use an Arcade function that isn't supported in your current Arcade version.

So, I would expect to have this  issue in Enterprise (since we are using 10.9.1), but in this case I'm in AGOL, which should always be current. AGOL should be using Arcade 1.20 (November Release).

This issue is also present in the ArcGIS Arcade Playground if you want to test it out there.

ESRI was able to reproduce the issue and it has been logged as a bug.