Why should GIS matter to Queer People? 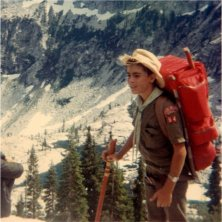 (this essay was written in 2020 by friend and colleague of many years,  Sean Dunnington, (he, him) storyteller, playwright and LGBTQ+ activist. Like many activists, Sean uses the reclaimed term "queer" in talking about his community. )

Why should GIS matter to Queer People? For the last two decades, cartographers, geographers, and scholars have been exploring the semantics of queer geography, an integrative approach to queer theory and spatial analytics that examines the social relationships of sexuality, place, and space. I employ queer as an elastic term that includes all dissident sexualities and peoples, but I like to think of it as a ‘zone of possibilities’ that rejects binary definition and deconstructs heteronormative identities, practices, and knowledge.[1] When applying geographic information systems to this zone, we are, as Jack Dangermond once put it, ‘limited only by the imagination of those who use it.’ So, what happens when Queers use GIS? Short answer: we queer space.

Of course, ‘space is not naturally authentically “straight” but rather actively produced and (hetero)sexualized.’[2] In queering space, we occupy and colonize (hetero)sexualized space, yielding both a resistance and a home for Queers.[3] Unlike many gay and queer spaces, which extend the normative within the borders of (hetero)sexualized space, queer space transgresses the normative and challenges (hetero)sexualized space.[4] Even when Queers no longer inhabit space, we can still mark it by its ‘battles fought over the social, political and cultural meanings attributed to the existence of [Queers],’ but in order to spatially historicize and archive queer space, we must place it on the map.[5] As Jacques Derrida denotes in Archive Fever: A Freudian Impression: ‘There is no political power without control of the archive, if not of memory.’[6] Much like our history books, maps are byproducts of power-knowledge.[7] So, when Queers challenge and appropriate the framework of GIS technology, we elevate marginalized narratives and use data to rethink, redraw, reclaim, and remap bodies, space and geography.[1]

Through this process of spatial archiving, we reframe our relationship with placelessness, a phenomenon that LGBTQ people experience frequently.[2] With the decline of gay and queer bars, assimilation of queer spaces, and gentrification of LGBTQ neighborhoods, it’s no wonder we feel an absence of permanent place.[3] But when we utilize GIS to visually represent and narrativize just how much space we inhabit, we reframe our understanding of queer belonging and place. As the Gay and queer Atlas puts it, ‘we are everywhere.’[4] When we queer geography and cartography, we redefine our place on the map. When we queer geographic information systems, we relearn space as intrinsically queer. Although, I must acknowledge that while queer space disrupts heterosexual space, it seldom disrupts racialized, gendered, and classed spaces.[5] Additionally, in terms of research and literature, queer space typically implies white and male space, or homomasculine space.[6] This is one of the limits that queer GIS has faced, but with the right users, it’s also one that can crack.

Furthermore, queer GIS lays the groundwork for possibility beyond sexualized space, because like identity, space intersects with all aspects of itself simultaneously. Utilizing the integration of queer theory and spatial analytics, GIS users can address queer issues such as transnational labor flows, diaspora, racism, immigration, public health, globalization, domesticity, geopolitics and poverty.[1] We can document history, activism, violence, legislation, communities, and local LGBTQ+ businesses in order to not only understand progress, but challenge and better it. Using spatial narrative, we can even visualize and share stories of our people. As historian Joan Nestle poses it: ‘We need to know that we are not accidental, that our culture has grown and changed with the currents of time, that we, like others have a social history comprised of individual lives and community struggles.’[2] We must use GIS to queer and complicate spatial narratives, as well as the pedagogy of heteronormative spatial thinking and understanding. We must queer GIS to include ourselves on the map, because if we don’t, who will?

[9] Knopp, L. (2004). Ontologies of Place, Placelessness, and Movement: Queer Quests for Identity and Their Impacts on Contemporary Geographic Thought. Gender, Place & Culture: A Journal of Feminist Geography 11, no. 1, 121–134.

About the Author
Charles Convis began the Esri Conservation Program (ECP) in 1989, and helped create the Conservation Technology Support Program and Society for Conservation GIS in 1993. Editor of "Conservation Geography", "Native Geography" and "Land Trust Geography in 2000-2004. Co-editor (with Dr. Lance Craighead) of "Conservation Planning" in 2010. Also see my new "Conservation Equity" global community site (ArcGIS Experience Builder) at https://bit.ly/3mCOoBu. The ECP historical site is at www.conservationgis.org, and recent films/photographic work can be seen at charlesconvis.com.