Could someone please direct me to a public bug tracker for this SDK so I may submit a bug report.

Sorry Dave. The correct link to report the issue without a fully paid support trail is this: https://support.esri.com/en/report-bug

@DaveWhitla to log a bug there are a number of support support options here. You can use the dedicated support option for example.  You may also have a support agreement with your local ESRI distributor if you are not US based.

Failing that, you can raise the bug here and I'd be happy to assess it.

I will post details as a separate topic then. I was just hoping there was something with a little more transparency - generally to see if I was reporting an already known, reported or accepted issue, and also to have visibility into triage and remediation timelines. I understand some commercial projects have difficulty in migrating to this kind of developer support style, but is there any plan for ESRI to provide this kind of visibility to consumers of the SDKs. It would also be nice if PRs and other potential collaboration were possible. It is often very frustrating as a developer when you can easily fix an issue in a dependency but the maintainers never action your requests for a fix themselves, often due to their own time pressures or conflicting priorities.

@DaveWhitla if you don't have a support agreement, you can report the issue here.

Current known issues which are likely to cause issues are always listed in our release notes. 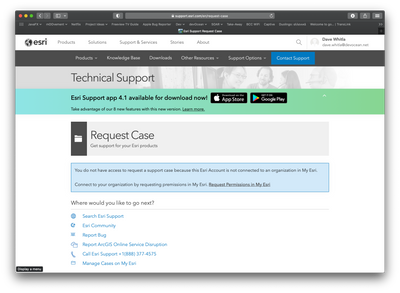 Sorry Dave. The correct link to report the issue without a fully paid support trail is this: https://support.esri.com/en/report-bug