I captured a video file using a DJI Phantom4 pro Drone using the ESRI Site Scan App for FMV (Full Motion Video) analysis. During the video capture, I set the camera in Nadir orientation (camera pointing straight down), Resolution set to be HD quality and flew the drone using the inspection flight option in the Site scan app. I exported the geospatial video flight log from the Site Scan App at the end of the flight.

I used the video multiplexer tool in Arc GIS Pro to attach the flight log to the RAW video file. The multiplex tool process was completed with a warning saying: The timestamp filed isn't according to the MISB format. As I found all of the tutorials on Youtube on Video multiplexer tool demonstrations have the same waring, I ignored the warning and proceeded with the process.

When I loaded the output video from the video multiplex tool on the ARC pro, nothing else appeared on the base map except for the platform trail and platform position (the center of the frame and frame outline were missing). I tried to do some area measurements while playing the video, but it gave me an error saying Error on converting video point to map point.

I also tried to export some frames from the video, and it exported the frames which didn't contain any projection or coordinate system. After considering all of the errors I have encountered during the FMV analysing process, the video multiplexer tool could not adequately georeference the video. 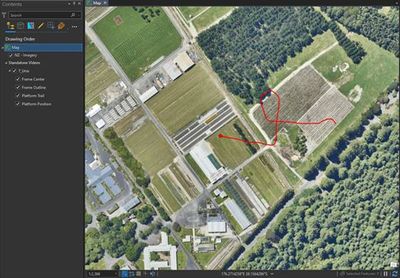 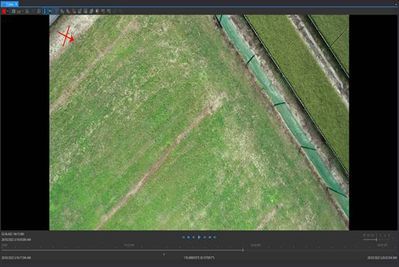 @CodyBenkelman could you please have a look on my issue?

I'm sorry I did not see this post earlier.  This is a common problem with DJI drones - they typically report incorrect flight altitudes, with errors often as much as 100 meters.  We first wrote about it in September 2018 at http://esriurl.com/DJIFMVblog

If you go to https://esriurl.com/map4groundelevation (ArcGIS Online login required) and paste in your lat/long values from your flight log file (in "Find address or place"),

then click on the map, you'll get elevation values for the ground surface in both orthometric and ellipsoidal height.  Your drone reported itself to be flying ~25 meters underground.  When this happens, FMV does not show the video footprint on the ground. 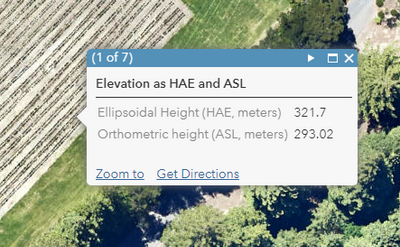 I took a guess at your flight altitude and applied a height correction to the attached file.  You can run this through the multiplexer to show your drone above ground, but the footprint won't be accurate unless I made a lucky guess.   If you know an accurate value for your flight altitude, you can correct the Z values to create an accurate result.

Thank you for solving my issue. Inaccurate Z values were the issue. If I got an accurate 1m Lidar DEM, how could I use it to correct the altitudes?  Does that DEM need to be in a particular projection?

Once again sorry for the long delay - not sure if you still need this - we wrote up a procedure for correcting altitude values here https://www.esriurl.com/CorrectDroneZ

It discusses sampling the ground elevation from the Esri ArcGIS Online world terrain service, but you could also use your own DEM - it doesn't matter what projection the DEM is in - but a high accuracy DEM is not required.  You're correcting for the drone's reported altitude above sea level or above the ellipsoid - localized changes in the DEM are not reflected in the drone altitude.

However, after running the multiplexer, if you want to show your FMV-compatible video on top of a custom DEM, you can do that by adding the DEM into ArcGIS Pro as an Elevation Source Layer 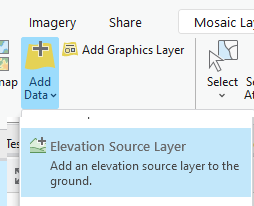