using the Arcgis online assistant (https://ago-assistant.esri.com/ )you can manually edit the feature service filters, i'll see if i can find the original post about it....

Thanks Dallas! A simple solution that I missed because I was thinking about the filtering logic in a very particular way. In concept this filter should work. But what actually happens with a filter based on in the last/not in the last 100 years is that it creates a data error in the hosted feature layer view. No features in the data table and a warning "this layer did not draw completely" in the visualization. Ugh.

Troubleshooting this further I discovered the magic number is 68. Filtering for greater than 68 years breaks the view. Totally inane. But at least 68 or less works. I'd prefer to not have to specify a limit at all (filter based on before/after now), but at least something finally works!

Glad to help! Strange that it bugs out past 68 years - I wonder if it's an issue with the filter or something related to the dates in the feature layer? Either way it's great that you got it working.

No need to make a view.

When you create an instant app with slider from your webmap, it is possible to have this behavior. Be aware of the second interval length, there you can set the time steps within the total time duration. 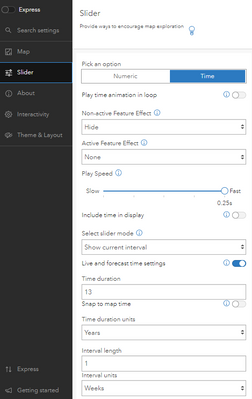