JavaScript only shows map if the code is inside the head

I'm in a project that I will need to show a map of "arcgis", can not be the map of google Maps, on the site of "arcgis" there is an example to show the code with javascript, here's the link: https://developers.arcgis.com/javascript/latest/display-a-map/, in the example the code is placed in the "head" of html, placing the head code as shown in the tutorial works, but in the project the "head" is in a template, and not on the page I want to show the map. The code of arcgis is as follows: .

And put on the page I want to show the map does not load ... No error appears in the console, simply does not load, I put several "consoles.log(" to follow the processing and everything is ok, apparently it's all loaded

There is a project that uses this map, but the implementation was done in Angular, the code is as follows:

Is there any way to implement in javaScript something similar to what was implemented in Angular?

The project is Java 7 with PrimeFaces 3.5

Hello, the code below works for me. Substitute your API KEY appropriately. 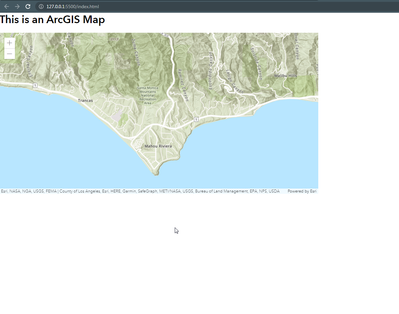 Is that what you wanted?

It looks like you might be missing the CSS for the viewDiv. Here's the snippet from the sample:

Or you can just add the needed style when creating the div: