Why do I have an un-editable parcel?

We have two parcels that are uneditable (marked with the x's), and it’s causing issues because we need to mark one as historic, as it’s been merged with the parcel above it.  You might also notice that lollipop sticking out of the NE corner?  That’s a dependent line.  The parcel to the east also has a dependent line that looks the same.

When you right-click on the parcel, all options are grayed out, making it impossible to even open it to try and correct it, or even to just delete it and start over.  I don’t know if the dependent line is causing the issue, or if it’s an unfortunate byproduct.  The parcel dataset as a whole was migrated from a simple model, but these parcels were created a couple of years ago inside of the fabric, so the problem was definitely created in the fabric itself and we just now found it a couple years later.  Any ideas on how to correct the issue so we can edit the parcel to mark it historic? 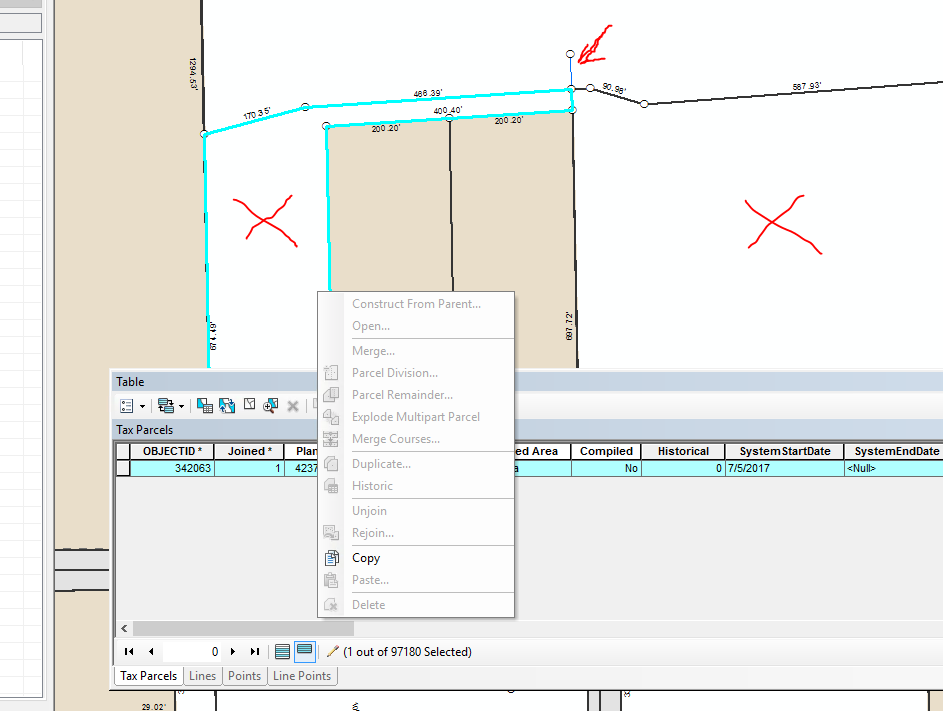 this poster had a similar issue! check it out: https://community.esri.com/thread/245774-parcels-with-no-functionality-when-i-click-on-a-parcel-all-...

this poster had a similar issue! check it out: https://community.esri.com/thread/245774-parcels-with-no-functionality-when-i-click-on-a-parcel-all-...

Ooo, thank you!  Hoping that's the breadcrumb trail I need!

totally going to toot my own horn - the OP in that post said my solution worked. its towards the bottom of the page.

Yep, fixing the Plan ID totally worked for us as well.  Nice work, thank you!