Must be the owner to perform this operation 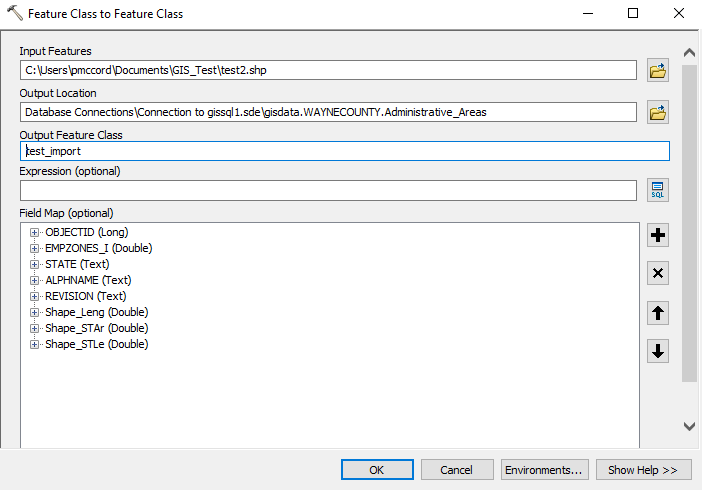 I've talked with our SQL Server database administrator who informed me that I am part of the AD user group with DB Owner permissions.

I'd appreciate any input why I'm not able to import data to my enterprise GDB.

When trying to copy/paste or import data into a feature dataset inside an enterprise geodatabase the copier/importer must be the user that owns the feature dataset.

It looks like you are trying to import the shapefile into a feature dataset that is owned by the user "WAYNECOUNTY". Since you are part of a group that has the "DB_owner" privilege, you are being recognized as "dbo"

Therefore, when you are trying to create the data in that specific feature class it is recognizing you as "dbo" hence an error is thrown.

You  could do the following:

2 - Create a new feature dataset as the existing user - which will be created as "gisdata.dbo.administrativeareas" and then you would be able to import as a feature class into this feature dataset.

Your response is helpful, but I'd appreciate just a little more information on option #1. How would I connect to the geodatabase as the WAYNECOUNTY user in ArcCatalog? Enterprise GDBs are not my strong suit.

In ArcCatalog, if you right-click on your geodatabase connection > 'Connection Properties' you should see the user that you are connected as by 'User name'. To connect as the WAYNECOUNTY user you would type in "WAYNECOUNTY" as the username, and a corresponding password for that user.

(If you do notice that you are in fact connected with the user name "WAYNECOUNTY", then you would need to ask the SQL Server database administrator to remove the db_owner privilege from this user.)

Unfortunately I was not the person who set up this enterprise geodatabase and he is no longer with our group. The Authentication Type, however, is an Operating System Authentication, so I'm not able to specify a different user name. Is there another way I would do this using OS authentication?