Using a GUID as the relate key can be tricky business.  If the data is collected in geodatabase and then moved into another gdb, those guids get changed.  My suggestion is to add another fieild and name it something like RelateID or JoinID.  You make it a text fields of 255 characters and then calulate it's value of the original GUID.  That value is a static snapshot so it persists regardless of where the data ends up living. Create your subsequent relationship classes based on this field.

Like so many things in life there is a trade of when using this procedure.  It's up to you to you to add new relate field values when records are added....

Re-thinking my earlier suggestion, I think you will need a series of 5 different relate fields in your attachment table:

In each of your 5 feature classes, you'll just have one relate field (aka the 'Key' field).

How do you 'create attachments' feature in ArcCatalog' ?  Looking at An overview of the Attachments toolset—Help | ArcGIS for Desktop , I don't see such a tool and the help makes me wonder if you'll actualy be able to accomplish your goal of one attachment table with  mulitple feature classes.

By default, the _ATTACH table contains the following fields where the REL_GLOBALID field is used to relate to the parent GlobalID:

One way I tried was to create relationship classes between each FC and the one _ATTACH table that I had ArcCatalog create for FC0 so:

That didn't work in the sense that the table would show up in ArcMap, ArcGIS Online, and Collector for ArcGIS but I couldn't add any attachments except for FC0.

Another way I tried was to add GUID fields to the FC0_ATTACH table for every FC I wanted to relate, which sounds like what you suggested earlier.

That approach yielded the same results as the first approach.

To add to the confusion of how ESRI handles attachments. I used ArcCatalog to auto create attachments for an Assessment FC, which gave me:

I looked at the Relates property for Assessment FC in ArcMap and could not see the _ATTACHREL relationship listed; however, I could still add attachments. The relationship shown in the graphic below is for another table and not for the Attachment table. 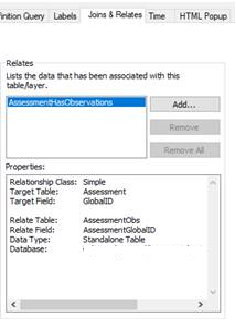 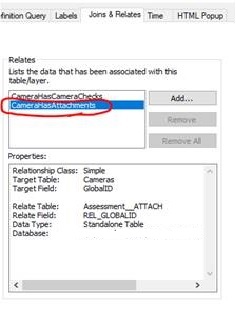 It makes me wonder if there is something going on behind the scenes to make the attachment relationships work that isn't exposed to the user. Also wonder if a personal GDB would treat attachments differently seeing as how it follows the Access database schema. A rabbit hole for another day. For now, I'll do it the ESRI way and create attachments for every FC/table that needs it.