I have an mxd file that I use as a template, this mxd references 2 databases (502 and 280 in the screenshot below). Now my question is when I try to create a version using create new version button in versioning tool bar then how to know which parent version is related to which database?? the drop down menu shows 2 parent versions with the same name dbo.default !!

I cannot till which till which is which, so If I am trying to create a new version to edit the schools I should do this in the 280 database but with the current window end up creating the version in the 502 database.

I am looking for method that doesn’t include trial and error. 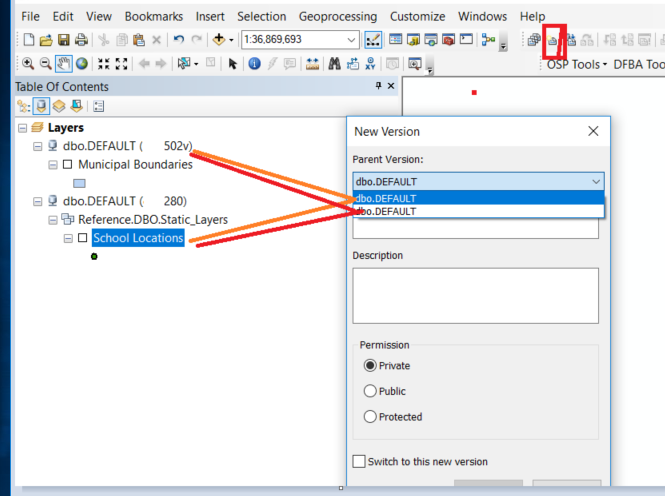 Another method to do that is by using the version manager window then right click above the default version then create a new version. This window says the database that you’re in but it doesn’t have the capability to navigate between all databases in the mxd!!

I believe both of them depends on layer location in the TOC the above layer is the first one in the new version window and is the default in the version manager widow.

Although this doesn't really answer your question regarding the versioning toolbar or the GDB administration GUI- perhaps the Create Version GP tool (also scriptable) might provide what you are looking for since it is based on the input .sde connection file (to the respective database)- and therefore specific to the database you choose. Hope this helps!

You're right about the tool and I am aware of it, but I am trying to  limit the number of tools that the user runs, adding to that the time that take the  user to create the connection and drag drop it to the tool then run it.  In my case this is time  consuming. And I created a template to avoid all of these steps, the user should be  able to grab a copy of the template > change the version or create a new one> start editing.

Thank you though for you input.

So back to the original posters question, how does one specifically choose the correct database?  The selection window is a bit vague.  And in my case, how does on force it to be the connection I want?  Not to hijack this thread, but I am likewise curious.

As you said its not the end of the world, but its annoying that we cant control it. Thank you.