AuGeo: An Augmented Reality mobile app for your GIS data

AuGeo, latin for ‘augmented’, is an Esri Labs initiative to explore the possibilities of using ArcGIS data in an augmented reality environment. Available to ArcGIS users (Viewer User Type and above) for free in the iTunes and Google Play stores, the AuGeo mobile app allows you to easily bring data from your existing ArcGIS point feature layers into an augmented reality mobile app. 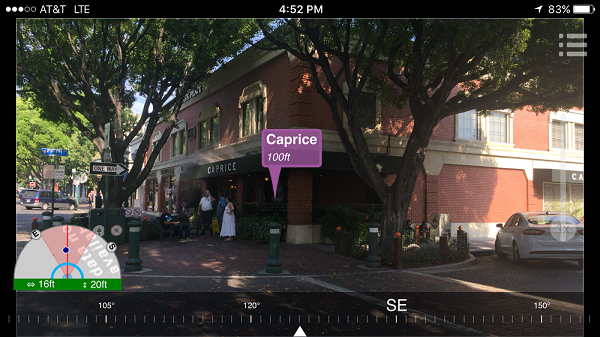 At Esri Labs we see many potential uses for Augmented Reality in GIS. While we love maps, locating assets around you can be easier through the lenses of a camera on your phone or tablet. Through an augmented reality view, we can more intuitively represent hidden assets (underground, covered by vegetation or snow), reducing the time needed for people to find what they were looking for.

Will augmented reality help perform asset inspections more quickly? Will it guide rescue teams towards a fire hydrant that otherwise would be missed? Will it provide the ultimate mobile user experience for the most technology averse real estate agent? Will it be the next cool way to explore tourist destinations in a city?

As a Research Project from Esri Labs, our intent with AuGeo is to make interesting technology available to you, so we can explore the possibilities together. To start with AuGeo, all you need is an ArcGIS Online subscription, some point data and a mobile device.

Preparing your existing data for use within AuGeo is very straight-forward as described in this tutorial.

We encourage you to experiment with AuGeo using your own data and scenarios. In our own experience, how accurately your GIS data is shown in AuGeo’s first person view is highly dependent on the quality of sensors in your device. The location accuracy and compass calibration in particular are key.  Of course, the quality of your own GIS layers is critical as well. Only through use and experimentation you will learn what practical uses you can give to AuGeo.

We would love to hear your feedback through our Github Repository and evolve what already looks like a gold (Au) mine of possibilities.

The source code of this application is also available with AppStudio for ArcGIS. If you are a developer (no need for mad skills by the way), you can embed the AuGeo functionality into your own applications, or even brand AuGeo for your own purposes.  We took the AuGeo AR view for example and embed it within another Esri Labs app called Trek2There.

Trek2There has been updated! Version 3.0 includes a number of fixes and some exciting new functionality.

The biggest change to Trek2There is that you can now connect to external GNSS receivers. The most common connection we expect users to try is a Bluetooth connection to a receiver from Trek2There on your Windows, iOS or Android device, but you can also connect via USB (on Windows) or a TCP/IP connection (any device) to a receiver on the same network.

To see what devices should work with Trek2There see: Supported devices.

To connect to a GNSS receiver in Trek2There you must first pair it to your device. Typically, launch the Bluetooth settings page on your device, browse for your receiver and connect to it. For more information on pairing see: API Guide.

Once your receiver and device are paired, you can browse for the receiver in Trek2There. To do this:

If you shut down Trek2There and restart it, the external receiver should be remembered and you shouldn’t need to configure it again. It will take a few seconds to reconnect, but it should be automatic. Whilst it is connecting you should see a progress icon in the top right-hand corner of the navigation page (where the satellite icon will display).

Using Trek2There with an external receiver is a great way to navigate to a feature or location that is not in a published route-able network. It's also a good way for you (and us) to get ready for GNSS receiver integration in other Esri apps. Sneak peak: Based on this work in Trek2There, Survey123 will be getting the GNSS receiver makeover next!

Bug fixes and other improvements
- A destination can now be entered as decimal degrees, degrees minutes seconds, degrees decimal minutes, UTM (WGS84) or MGRS coordinates.
- Bearing values is displayed on the navigation page (as well as the direction arrow).
- Accuracy value now shown to two decimal places.
- Reduced direction arrow bouncing when stationary.
- Now when using the experimental compass mode, you will see a compass indicator in the top left-hand corner of the navigation page as a reminder.
- Improved timing and display of arrival at your destination.
- Improved speed in getting a 'fix' when Trek2There is launched from another app.
- Coordinates can now also be copy / pasted from another app on Android (previously only iOS).
- On Windows, when you launch Trek2There from another app, a new instance is no longer launched if an existing one is already open

iOS: Trek2There on the App Store

Esri Regular Contributor
Tile Package Kreator has been updated! Version 1.3 includes the ability to drag and drop shapefiles for delineating the bounding area of a TPK, browse Image Services for creating TPK's from, and generate TPK's with levels below 19.
For a reminder on how to use the tool see Taking your maps offline with Tile Package Kreator or download the updated Guide. To download the app go to the Esri Marketplace.
Esri Labs projects are developed by Esri employees and are inspired by our interactions with ArcGIS users like you. Esri Labs projects are free to use but are not official Esri products. These projects do not go through the rigorous software development cycle so they are not holistically tested, documented or supported by Esri technical support.
Shapefile drag and drop
Drag and drop a shapefile onto the map to create a boundary for export. Be sure to drag both the .shp and .prj file onto the map. Both line and polygon features are supported. 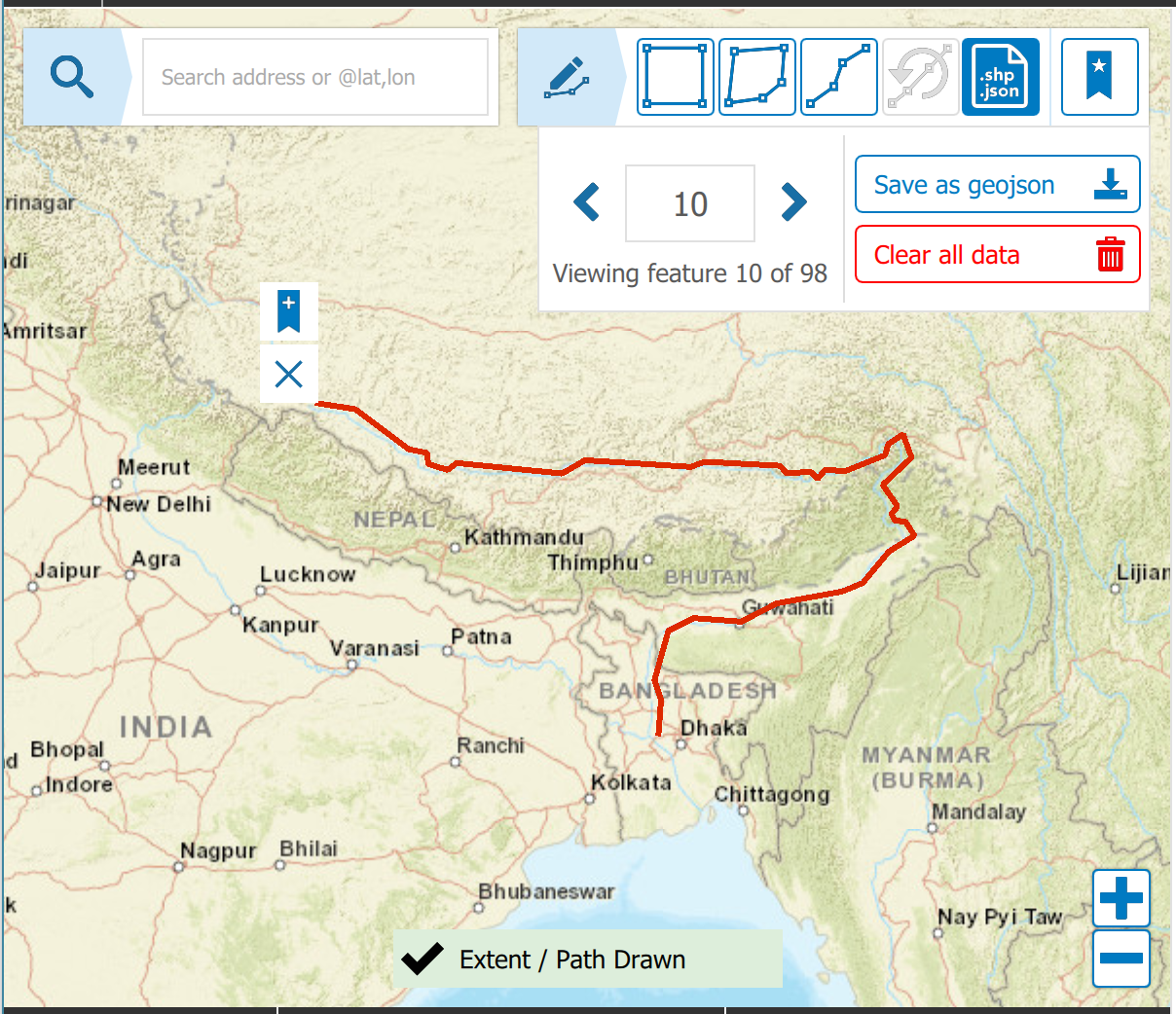 Image services
In order to be able to browse image services, you must first change search query that is use by Tile Package Kreator. To change the query go to Settings. The default query is shown in the Search Query for Tile Service box:

You can alter this query to suit your organizations needs. Don't worry if you get tangled up with the query, click Reset to Default to return to the default query.

Levels below 19
Several services, like the World Imagery for Export service support additional zoom levels in some parts of the world. Tile Package Kreator now supports export of tiles from these additional levels, but we advise to proceed with caution.
The default maximum level is 21, you can increase this level in Settings, but we have observed regular failures to export beyond level 21.

This additional levels also significantly increase the number of tiles that are to be exported. When using these levels consider a smaller extent.
Time out non-responsive services
There may be services in your organization that are currently not working as expected. Tile Package Kreator does keep trying to get a response from services that have export enabled. You can adjust how long your willing to waiting for a service respond on the Settings page.

We have created this Geonet Place to more easily share with you all news related to Esri Labs initiatives. Through our Blog we will describe new projects and updates to existing ones. This Place is also intended to help solve any technical issues, discuss enhancements and new ideas around Esri Labs projects.

What is Esri Labs?  Esri Labs is a brand that Esri uses to make available to you new technologies and collaborative projects that we feel are worth sharing, but not quite ready for full productization. Esri Labs projects are developed by Esri employees and shaped based on customer feedback and validation. While often awesome, Esri Labs initiatives are not official Esri products and as such are not covered by Esri Technical Support.

Why Esri Labs? Through Esri Labs we want to share with you innovative works that can be useful for your job, and get your feedback so that we can evaluate if and when these tools should make it into the ArcGIS Product Portfolio.  Early Adopters of Esri Labs have an opportunity to influence the development of ideas and technology by submitting feedback.  On a case-by-case basis, some Esri Labs projects may be entirely or partly productized.

How do I get Technical Support on Esri Labs projects? Esri Labs initiatives are often directly supported by the Esri Development team behind them. In some occasions, the Esri Community also provides support through the Esri Labs Geonet Place.

What is the difference between projects in Esri Labs and projects in Beta? Esri makes no commitment towards fully productizing works under Esri Labs. Beta Programs from Esri are setup on top of initiatives for which there is a well-defined product plan and pathway for release as part of a supported production-quality technology or product.

Are Esri Labs works licensed under an Open Source License? Not necessarily, but many Esri Labs initiatives offer source code under Open Source licenses. This is by design, so you can take these initiatives to the next level and when appropriate, contribute to them.

What should I expect from this GeoNet Place? As described at the beginning of this post, we have setup this GeoNet Place so we you can find all news related to Esri Labs in it. We also would like technical questions, ideas and general discussion around Esri Labs projects to happen in this Place.

AuGeo: An Augmented Reality mobile app for your GIS data