With the April 2021 release of ArcGIS Online, a new Map Viewer was released. You can choose if you want to use it now or keep working in what is now called Map Viewer Classic. Here is a look at info we think important for the K-12 community.

Grab a tea and settle in — this is long but full of goodies!

No time right now? Get the highlights from my earlier blog, What K-12 educators need to know about the upcoming ArcGIS Online update. 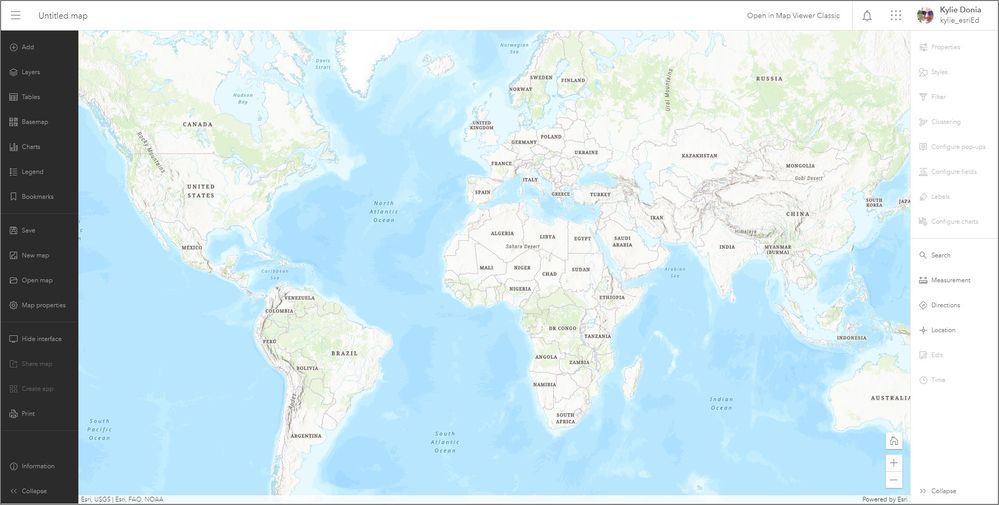 This is a new Map Viewer. It's a new way to open your maps and make them interactive, just as Map Viewer Classic does.

Let me make a comparison to Microsoft Word. Think of the new Map Viewer like a new version of Microsoft Word and think of your map like a Word document. Your old documents open in the new version of Word, and similarly your same maps open in the new Map Viewer. If you change your document, taking advantage of things in the new version, then it no longer opens in the old version of Word. It's the same with your maps: there are some changes (and we'll talk about them in "Gotchas and limitations" below) that will limit the use of that map in Map Viewer Classic. But using the new Map Viewer brings new capabilities and enhancements that you might want to take advantage of with your maps (see "New tricks for presenting a map" and "Cool new mapmaking stuff" below).

Where maps open by default

When you search and browse maps in ArcGIS Online, they open in the default map viewer.

When you open a map from a link (perhaps one from an email, or a GeoInquiry) the map opens in the map viewer specified in the link. Maps you've shared as links will continue to open where they opened before (regardless of the default for your org or account). The same is true for sharing new links to maps: if you copy the URL while viewing the map in the new Map Viewer, they'll open there for the recipient of your link. If you copied the URL while viewing the map in Map Viewer Classic, they'll open in Map Viewer Classic.

How to tell which map viewer you are using

When you or your students have a question about how to do something, the answer depends on which map viewer is being used. At a glance, you can tell which you are using by checking the toolbars and the navigation controls.

In the new Map Viewer, the toolbars are to the sides of the map, the left toolbar is a dark gray, and the navigation controls are in the lower right: 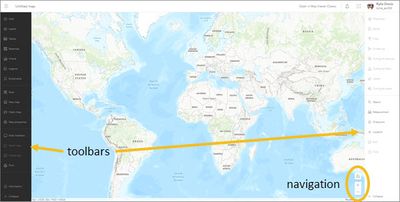 In Map Viewer Classic, the toolbar is above the map and the navigation controls are in the upper left: 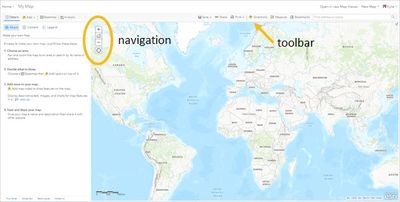 How to switch between them 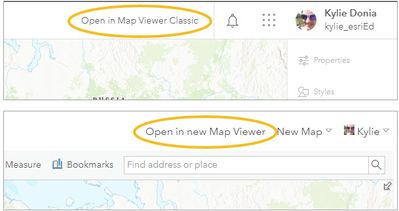 You've opened a map, and you realize you'd rather be in the other map viewer. It's easy to switch between them! Click "Open in new Map Viewer" or "Open in Map Viewer Classic" above the map.

Tip: At smaller screen widths, "Open in Map Viewer Classic" moves into the menu accessible in the upper-left corner of the new Map Viewer.

The first thing you'll notice when you open the new Map Viewer is that the tools have moved (or maybe its sleek, dark modern look). The tools are now divided into two toolbars on the sides of the map. On the left is the gray Contents toolbar with tools for working with the map and its contents, such as adding layers, changing the basemap, or opening a different map. On the right is the Settings toolbar, where you'll find tools and options, and where you'll set up each layer (including changing style and authoring pop-ups). 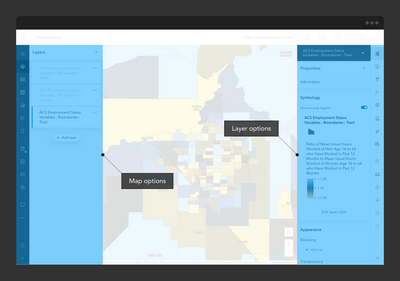 Yes! You can search for and open maps without leaving the new Map Viewer!

New tricks for presenting a map 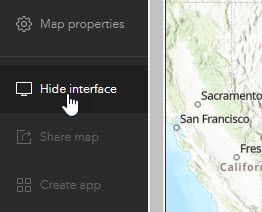 In the new Map Viewer, you can hide the interface and see just the map, keeping your students' (and your own) attention focused. When exploring data in your map, filtering and smart attribute summaries help you understand that data and find hidden patterns.

For those of you who customize and personalize maps, or make your own, the new Map Viewer brings some cool new mapping capabilities. Here are some of our favorites for education:

When you need Map Viewer Classic

The new Map Viewer is released and brings some great new features. However, you can't yet do everything you are used to doing in Map Viewer Classic. The following commonly used in K-12 are not yet supported in the new Map Viewer (as of April 2021):

For a complete look at the differences, see A tale of two ArcGIS Online map viewers: functionality guide.

If you are making your map for the Schools Competition 2021, stay in Map Viewer Classic. The 2021 ArcGIS Online Competition for US HS+MS Students is wrapping up now. Don't change anything! No extra credit is given for taking advantage of the new things just added with the new Map Viewer.

The best practice is to create a copy of a map before editing it in a different map viewer than where it was created. There are some differences between the two that might (unhappily) surprise you, so having that backup is a good idea. Be aware:

What happens if not supported

Exactly what you'll see in places that don't support the new maps depends on the map customization you made in the new Map Viewer. My best advice? Use the tools available to make your map better. See what happens in Map Viewer Classic so you know. You can often control where the map is viewed, and the better map can be worth some limits on where it can be used.

There are some resources available to get you going with the new Map Viewer:

And always... my favorite tip... GO PLAY. Try it, click buttons, get used to the change and see where things are. Need a map to play with? Try one of the updated GeoInquiries, available in the GeoInquiries Hub.

About the Author
I want to bring GIS to every K-12 classroom and every child. A long-time Esri employee, I've previously worked on Esri's mobile apps, focused on documentation and best practices. Out of the office I'm a runner often found on the trails or chasing my children.
Labels