Esri Frequent Contributor
1 0 2,477
My colleague James Rattling Leaf and I created a story map on the Lakota language.   Our reasons for doing so are several.  We have long been interested in and collaborated on projects involving education, maps, and GIS, and wanted to illustrate how the story maps platform can be used to learn and teach about Native Languages, beginning with Lakota. When you access the story map, and step through its contents, you will be able to hear audio of a dozen words that are in both Lakota and English, a photograph of each spoken feature, and what that feature looks like on a satellite image map.  By coupling visual cues with audio, we hope to inspire others living on the Lakota lands, those working with language projects such as Recovering Voices, at the WoLakota Project, at the Language Conservancy, and others, to take these ideas and do even more with the story maps platform.  For example, you could embed these story maps in web pages; you could add video to the maps (as we illustrated with the word "lake"), you could create different types of story maps, and much more.  For learning about language, place, biology, history, geography, and many other themes, integrating audio and video with maps is becoming a powerful and yet easy-to-understand medium.

Second, we are interested in the issue for reasons deeper than our affinity for languages, geography, and GIS.  As noted on Lakhota.org, "Native languages in the United States are in the throes of a prolonged and deadly crisis. For the past 400 years, Native Peoples and their languages have been steadily and undeniably disappearing. Though the historical fate of Native Peoples has been reluctantly acknowledged, less is publicly known about the associated fate of their languages."  And furthermore, "Lakota is dangerously close to extinction. Recent linguistic surveys and anecdotal evidence reveal that Lakota speakers of all abilities, on and around the reservations of North Dakota and South Dakota, amounted to fewer than 6,000 persons, representing just 14% of the total Lakota population. Today, the average Lakota speaker is near 65 years old."

Furthermore, geography, place, location, and culture are reflected in the Lakota and other Native languages, making story maps an excellent tool for teaching and learning.  For example, according to Lakhota.org, "Nature is used as the primary source for the metaphor models," and "Lakota is also very good at emphasizing the finer attributes of travel. A person can be considered to be coming or going to or from specific places in many levels detail. Lakota greetings themselves reflect this tendency, where in English "welcome" is literally Lakota - "Good that you came," And "goodbye," is "Travel well." The language also closely linked the land to the people through geographical names and stories.  [] A word like woímnayankel, expresses notions of awe, humility, and interconnectedness. A Lakota speaker might use this when describing the experience of the northern lights (aurora borealis). The word expresses the humility that a person feels when confronted by the awesomeness of nature while also feeling intimately connected with it."

How might you use story maps, and the ideas presented through this Lakota language story map, in your own work? 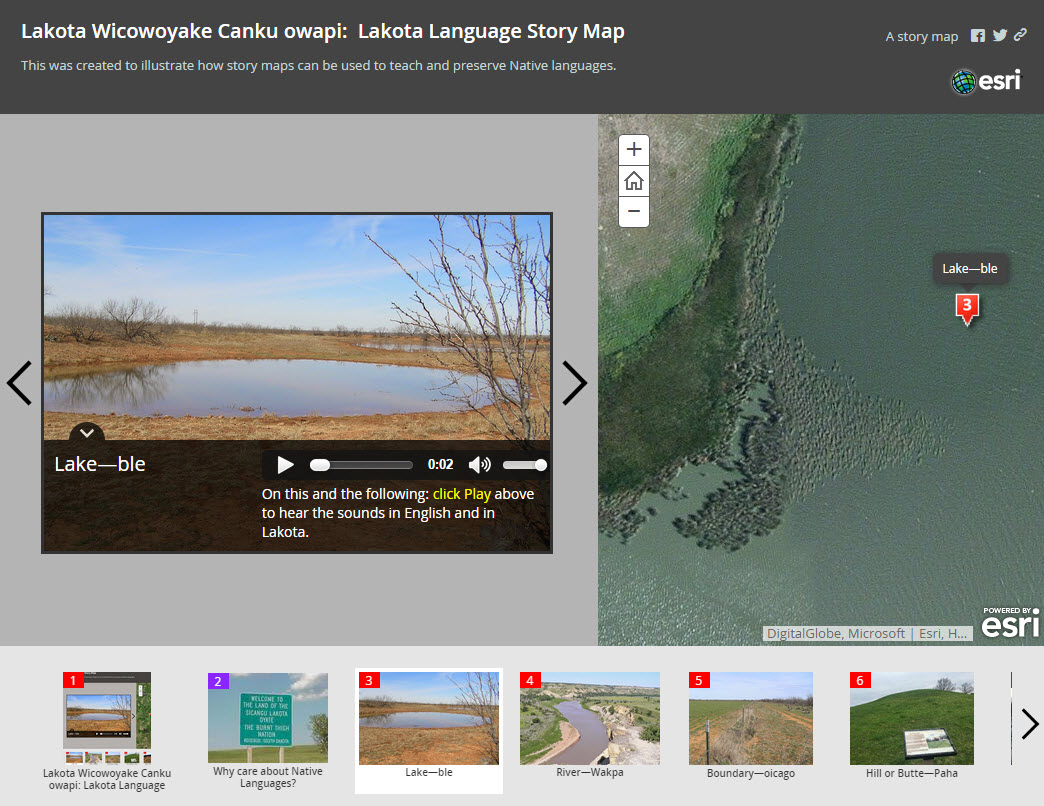