It is still one of the clearest memories I have of any of the hundreds of work trips I took over my career:  My colleagues and I, along with over 10,000 others, had just arrived in San Francisco for the annual meeting of the National Science Teachers Association.   It was the evening of 11 March 2011.  As the night wore on and we were setting up our Esri space in the exhibit hall in a very large convention center, reports began flowing in about the terrible events that were currently unfolding in Japan:  The Tōhoku earthquake and tsunami.  It seemed almost too horrible to believe.

(view in My Videos)
Even though all of us staffing the Esri exhibit had been studying and teaching natural hazards for years, the photos we saw of cities besieged by waves (this was before streaming video on phones was common) were heights and extents far larger than we had ever seen before.  Suddenly, all the challenges I was experiencing in life seemed to pale in comparison to what people were dealing with on the other side of the Pacific Ocean.

When all was said and done, Tōhoku was the most powerful earthquake ever recorded in Japan and the 4th most powerful in the world since modern record keeping began in 1900.  According to some estimates, 20,000 people were killed or were missing, and close to 500,000 people were forced to evacuate. In addition, a nuclear power plant meltdown triggered a nuclear emergency.  The economic loss from this event was estimated at $360 billion, easily making it the most costly natural hazard the world had ever experienced.

On that night, none of us knew these figures yet, but our hearts went out to the victims.  And, we immediately shifted the main focus of our Esri exhibit to show educators how they and their students could use GIS to examine this and other devastating natural hazards in science education.  We believed that spatial thinking and analysis through GIS was a method that could be used to study any aspect of our dynamic Earth, at any scale, and across any temporal span.  The same is true a decade later.  We used what we had available to us in 2011--real-time feeds through the QuakeFeed app on the phone (which still exists and is still excellent) and mapping the USGS real-time spreadsheets of earthquake epicenters, magnitudes, and depths.  And in terms of software, since ArcGIS Online was just coming into existence, we were able to show a few of these layers using this new tool, and also in ArcGIS Desktop version 9.  Even then, educators were amazed at the capabilities at their fingertips.   I wrote about these tools upon my return to the office, in this article in ArcWatch.

Fast forward 10 years:  Educators and students now have an even more amazing variety of 2D and 3D mapping tools, such as ArcGIS Online, ArcGIS Earth, ArcGIS Pro, and the 3D scene viewer, data sets (such as the ArcGIS Living Atlas of the World), tutorials, and lessons online.  They can use these tools and data sets to examine what has transpired over the past decade in the affected areas, and in areas impacted by other natural hazards around the world.   In this video, I describe some of these ways focused on Japan.   These include the use of  wide variety of base maps in ArcGIS Online, including oceans, satellite imagery, street maps, shaded relief, and others, to examine changes at a scale from northeast Japan to local neighborhoods.  The measure tools in ArcGIS Online can be effectively used to teach about scale and distances, for example between the plate boundary and the coast and the area of the city of Rikuzentakata that was one of the most devastated communities. The Wayback imagery app focused on the latitude and longitude of the bay in which this community exists can be used to assess the reconstruction in coastal villages from 2014 to the present, as I share here, clearly showing massive amounts of earth moved in to raise the coastal area of the city before reconstruction even began.

The ArcGIS 3D scene viewer can be used to assess the precarious position that the city occupied at the end of the narrow bay.  The same tools can be used to measure the distance from Rikuzentakata to the Fukushima Daiichi Nuclear Power Plant in Ōkuma where the tsunami caused the nuclear disaster, the total area occupied by this massive power plant, the changes on the plant grounds and surrounding community between the time of the earthquake and today.  You can add layers to these maps and scenes, such as ecoregions, land use, earthquake epicenters before and after 2011, nearby volcanoes, and human-built infrastructure such as buildings, roads, and dams.  Why?  To detect patterns, relationships, and trends.

The above studies can be done without signing in to ArcGIS Online, but if you do sign in, you can do even more:  You and your students can save the maps that you create, and share them with each other, with your entire school or university campus, or with the wider community.  See the map I have shared here and shown below with selected layers indicating population density, purchasing power, average age, and historical and current satellite imagery.  You can use the over 40 spatial analysis tools in ArcGIS Online to determine, for example, all the land in Japan within 100 km of the plate boundary, the population living within 5 km of the coastline, the land use change in communities over the past decades, pre- and post-earthquake, and much more.  You could create a mean center and standard deviational ellipse of recent earthquakes there.  You can also create multimedia story maps from those maps that show the results of your analyses and that tell a more complete story of the human suffering and resilience of the people in the area.  You can bring the layers you create into ArcGIS Pro or ArcGIS Insights for further analysis.  The Living Atlas of the World, other layers in ArcGIS Online, and ArcGIS Hubs and open data portals can be queried to bring in other hazards data.

But using GIS in education has always been about far more than the tools and data layers alone.   First, GIS is used far beyond education:  GIS is being used in everyday life by a wide variety of organizations, helping with warnings, evacuation, rebuilding, and resilience efforts in all forms of natural hazards, but may be especially pertinent in something as devastating as an earthquake and tsunami.  Second, the GIS tools and data in the above examples can be effectively used to teach the higher and greater educational objectives:  These include fundamental concepts about the patterns of natural hazards.   And, discussions about:  Why do people live in hazardous zones?  How can communities be made to be more resilient?  Ask students to research the earthworks and other efforts in Rikuzentakata and elsewhere in Japan--are these efforts bearing fruit?  The 2011 earthquake shaking occurred over a few minutes, but its effects will last for many generations.  What are the short term and long term impacts on people's lives, on communities, on the country?   What are the efforts that other communities have made to be more hazard-resilient?  What hazards are most common to your own community and to your own region?  What efforts has your own community made in response to these hazards?

Resources such as the Esri Disaster Response zone can be used to teach about the dynamic planet that we call our home, and the variety of hazards in terms of temporal and areal scale, timing, and relationship to other hazards.  You could start with this dashboard updated in real-time, shown below.  For further investigation, you could use lessons such as this one on plate tectonics or others in the GeoInquiries collection or these hazards lessons in the Learn ArcGIS Gallery.  These resources and others can be used to investigate the impact that hazards have on human lives, property, wildlife, ecoregions, and, in the case of the Tōhoku earthquake,  even the shape and size of the Earth, due to movements that occurred on that fateful day in March 2011. 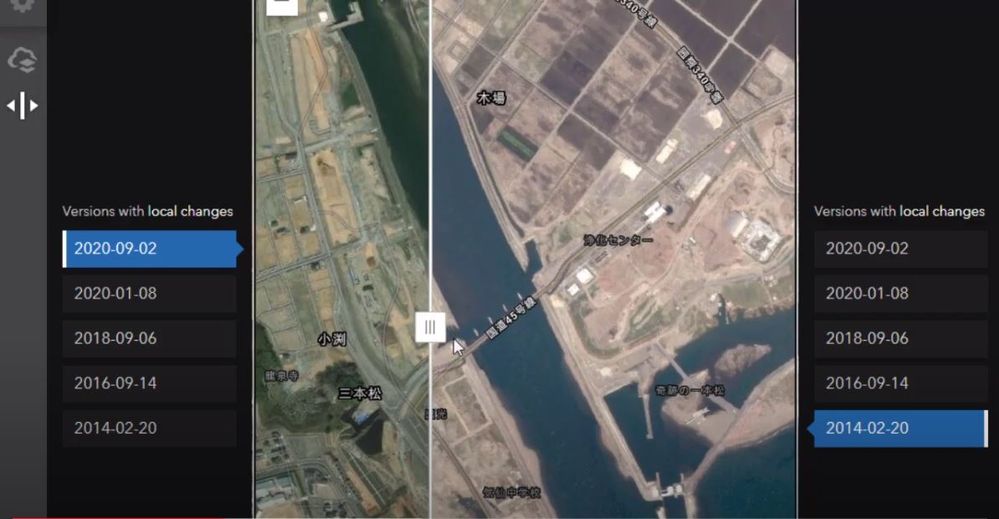 Analyzing affected communities in Japan over space and time using the swipe tool in the Wayback imagery app. 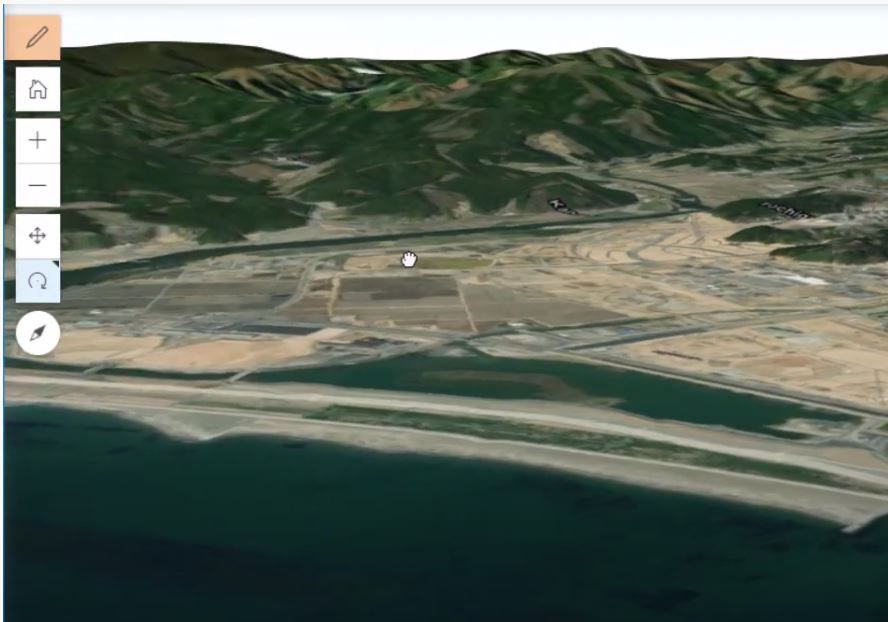 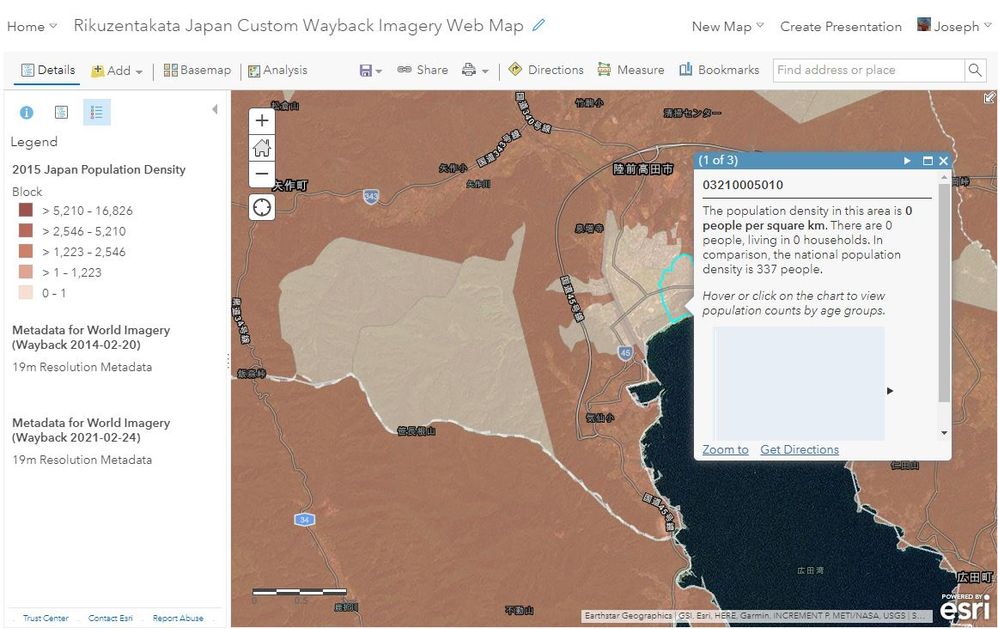 Population and demographic data, historical imagery, and current satellite imagery saved in an ArcGIS Online map, here. You can do the same thing with these tools, or start with the map that I created and customize it for your own use. 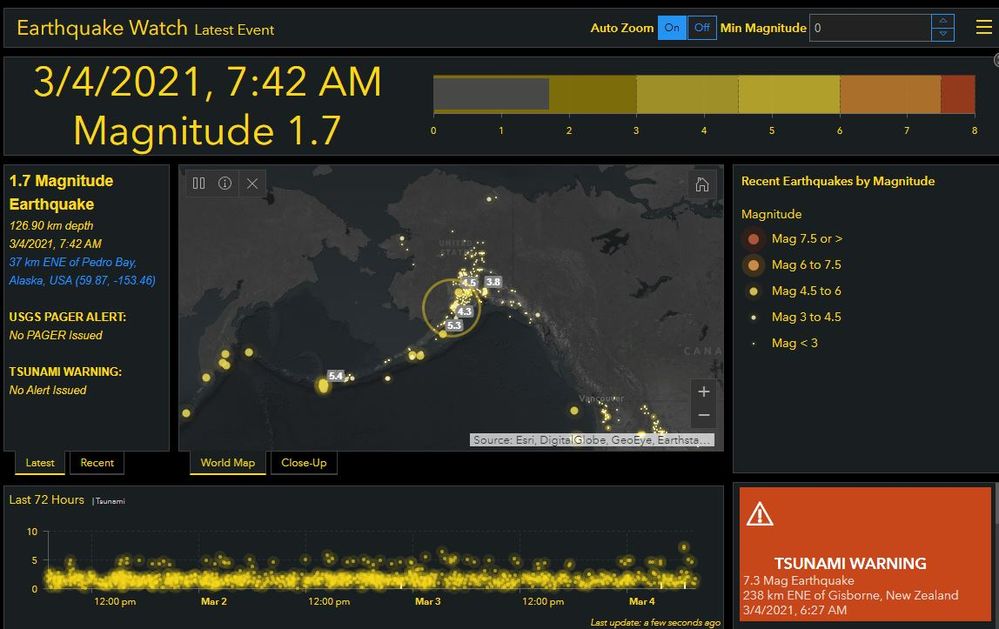 Real-time earthquake dashboard made with ArcGIS tools.  You can start with this dashboard and revisit it each day or each week in class, and you and your students can make your own dashboards, too (lesson here).