Esri Frequent Contributor
0 0 514
We have compared different field data collection devices and apps in this blog over the years, including between smartphones and recreational-grade GPS receivers here and here,  and between two smartphone apps.  We have also discussed Esri field apps such as Survey 123 and Collector for ArcGIS.   How do tracks collected with smartphone apps compare to those with a survey grade GPS receiver?

I was recently in the field collecting the rim and the bottom of gullies incised through head cut erosion with some excellent high school students and their instructor from the Santa Fe Indian School.  The instructor brings his students to the same site each year, and over time, it is evident that some of these gullies are very actively eroding.  In a semi-arid region where topsoil is one of the primary natural resources, erosion is a very serious matter.  I like the project because it incorporates time, space, fieldwork, GIS, and GPS, and real-world issues, but most of all because the students are active in experimenting with solutions to the problem, such as the construction of "Zuni Bowls" which can slow erosion rates.

I mapped the tracks that I had collected with 2 smartphone apps (RunKeeper and Motion X GPS) and the tracks collected by students using Trimble GPS receivers running Pathfinder Office.  It was easy to bring the data into ArcGIS Online for comparison purposes from the original GPX and shapefiles.  As you might expect, the tracks from my smartphone apps are quite angular compared to that collected with the Trimble, which have sub-meter spatial accuracy capability.  By contrast, the geo-tagged photographs that I typically use in creating campus story maps, such as this one of New M..., over the past year,  even though they were collected with a smartphone, have been steadily improving in spatial accuracy.  They are now usually less than one meter away from where I actually took them, as measured on a satellite image base map.  Therefore, point data from a smartphone is often better than line (track) data.  But the track collected on a smartphone with Collector for ArcGIS will be much more accurate than that from my non-GIS smartphone fitness and GPS apps.

But note that I used 2 low-end apps on my smartphone to collect the tracks.  What if I had used Collector for ArcGIS?  As is explained here in these slides, Collector allows collection of data with extremely high accuracy.  Here is an example of Collector being used by a water district with excellent results, and in this video from the field, I explain how educators are using it to collect trees, light poles, curbs, and other information in a city.

As we have mentioned many times in this blog, using geotechnologies in instruction comes down to:  Use the most appropriate tool for the job.  The gullies measured by the students in this study have intricate perimeters, and thus, the higher end GPS receivers were essential. Or, they could have used the Collector for ArcGIS app.  For collecting water quality in streams or trees on your school campus, a recreational grade GPS receiver or a smartphone app might be the most appropriate solution. 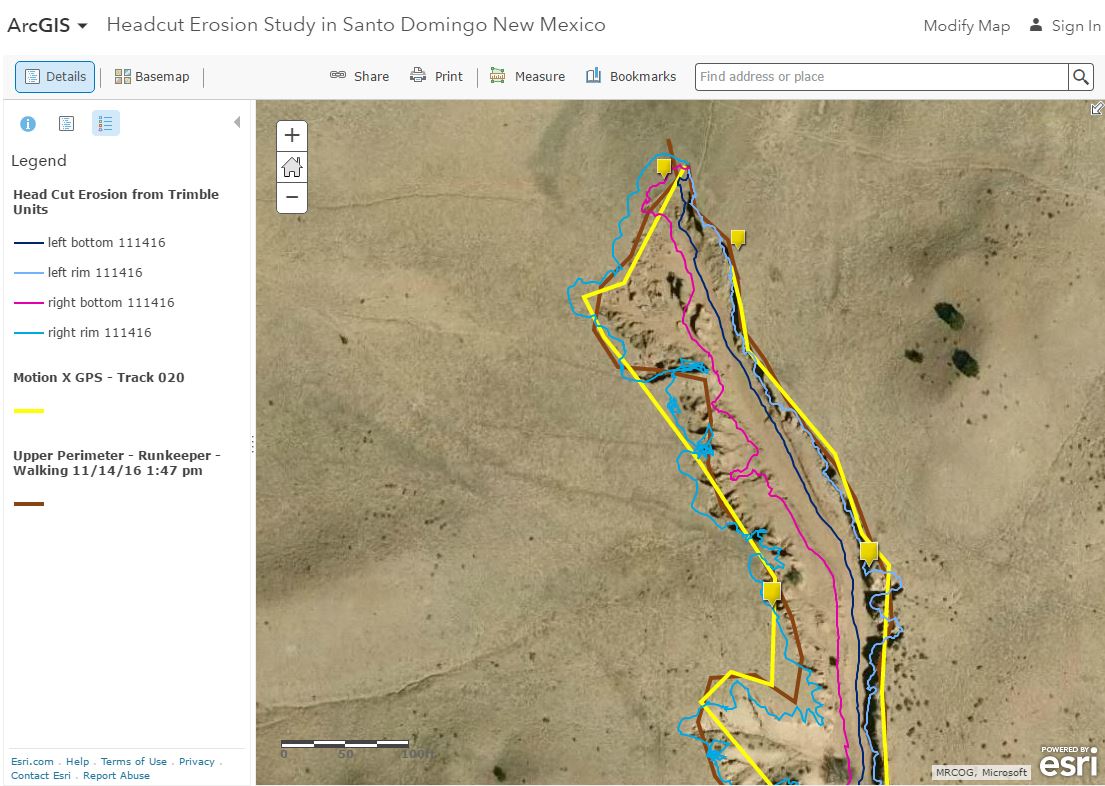 Results of comparison of field methods and devices in ArcGIS Online.