If we agree that fostering spatial thinking in education and in society is important, how can we know if we are succeeding in that effort?  Many people rightly want to find out what the most effective ways of measuring spatial thinking are and how to implement them.  Assessing spatial thinking has been discussed over the past few decades in venues from research articles to conference panel sessions, resulting in a small but growing set of spatial thinking measures.  In this essay I describe a new spatial thinking test that is straightforward but one that could provide numerous benefits to instructors and even to the students taking the test.

A key way of fostering spatial thinking is the use of GIS technology and approaches in education.  This has been the subject of many essays in this Esri education community space, theses and dissertations by students from all over the world, research articles such as here and here, and even entire books such as ones I have co-written and many others that my colleagues have written such as here.  I recently wrote this essay describing 10 key educational benefits in teaching with GIS.   One benefit cited by many is spatial thinking (read my own definition of it). During my early USGS days, I used a stereoscope and aerial photo pairs to assess students' spatial thinking abilities.  This was a perennially popular activity that I have now brought into the modern GIS world, as I explain below.

Most of us in geotechnology education are really most focused on geospatial thinking.  Geospatial thinking assessments are fewer in number than those in the wider "spatial thinking" research community.  That said, several geospatial thinking tests/assessments have been developed and successfully used.  The most oft-cited is probably Lee and Bednarz' Spatial Thinking Abilities Test (STAT), created in conjunction with the Teacher’s Guide to Modern Geography (TGMG) project of the American Association of Geographers (AAG).  Other researchers have adapted and modified this test, in Japan, and others have created new tests, in Spain, (note, the previous 2 links point directly to the download of the PDF files of the research), in Greece, in Europe, and in Canada.

In what I hope is a valuable contribution to these assessment efforts, I have devised a spatial thinking assessment activity that takes advantage of the easy-to-use 3D scene viewer, part of the ArcGIS Online platform.

The lesson:  Ask students to create a new 3D scene in ArcGIS Online.  In the 3D scene, ask them to create one 3D scene "slide" for each digital oblique aerial photo that you, the instructor, supplies or points them to.  The challenge:  The student's 3D scene slide must match as closely as possible, the angle to ground, the scale, and the cardinal direction to which the aerial is aligned.

Why use oblique aerials?  Obliques provide an extra challenge and an intuitive connection to the 3D scene capabilities, though you could certainly use traditional straight-from-above imagery from ArcGIS Online or other sources as well.  If you used straight-from-above imagery, you could use ArcGIS Online, or the ArcGIS Online 3D scene viewer, or even ArcGIS Pro.  In my case I am using oblique imagery and the ArcGIS Online 3D scene viewer.  With gracious permission from my colleague Vern Whitten who owns his own aerial and outdoor photo company, Vern Whitten Photography, I am using a set of aerials that Vern flew in Minnesota and North Dakota in summer 2021, in this collection.

In the activity and assessment, the student first examines an image from the collection, below: 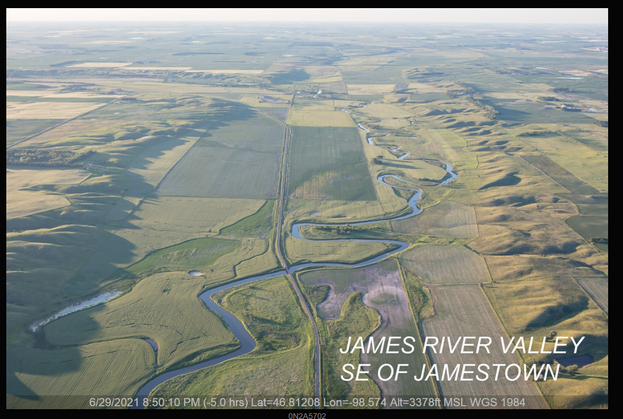 The student then enters the latitude and longitude shown at the bottom of the image in the search box in the ArcGIS 3D Scene viewer.   The student then simultaneously examines by toggling back and forth, in separate browser tabs, the aerial and the 3D scene, adjusting the latter so it matches the former.  In a few minutes, I created the following 3D scene and captured it as a slide, shown below, for the above aerial.   For a 2 minute demonstration, see this video. 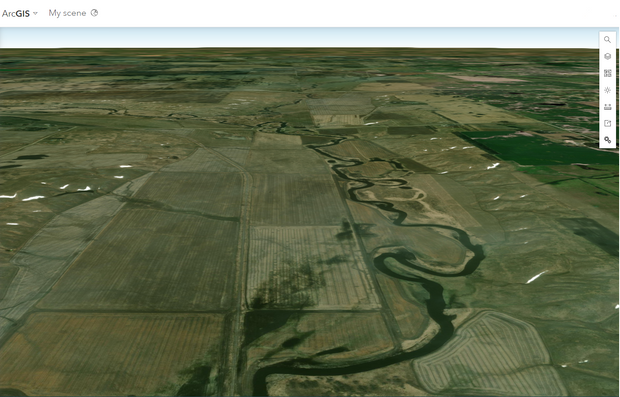 For assistance on creating scenes and slides, see this documentation.   When done, students should test each slide to make certain its settings closely match each aerial as possible.  When saving, students need to pay attention to which slide they are using as the initial default view.

What is being assessed?  (1)  Skills in creating a 3D scene, part of modern GIS workflows and tools, including the use of image layers, scene navigation, slide creation, saving, and sharing.  (2)  Spatial thinking skills:   Orientation, scale, identifying ground features, elevation, horizon.  (3)  Geographic skills:  Change over space and time, natural forces acting on the landscape, human forces acting on the landscape.  (4)  Communication skills:  Consider asking your students to present their results to you and to their peers in your online or F2F class in a 5 minute presentation.  They could make use of their 3D scene above and even embed the 3D scene in a story map where they answer some of the extended questions I pose below.   (5) Self-reflection on learning.  Consider including a few questions that ask students to reflect on the content and skills they gained through this activity.

My assessment includes how close the students 3D scenes come to the (1) angle of view, (2) orientation (cardinal direction), and (3) the scale of the scene.  I avoid getting too granular in my assessment; rather, I use "they match", "they are close to matching", and "they do not match" as the rubric for each of the three measures.   For example:  I assign 3 points for each scene if the scene and the aerial match or are close to matching,  2 points if there is something (scale, tilt, direction, etc.) that is off, 1 point if there are 2 things off, and 0 points if there are more than 2 things off.  By "off" I mean that there is a difference between the 3D scene and the aerial.

Example.  As an example, see this 3D scene I created of the first 15 of the 26 images in the aerial collection.  Advance through several slides so that you and your students get the idea.  You can ask students to create slides and a scene for images 16-26, or start completely over and do all 26.  Or use other aerials as I describe below.

Extending this activity.   Add additional imagery types in your 3D scene and toggle back and forth between the default basemap imagery to, say, NAIP imagery or the Clarity imagery layer.  You will notice the clarity layer as a choice to toggle on and off in the 3D scene I created, above.  Find additional imagery from aircraft, UAVs, or satellites and ask students to create 3D scenes matching those images.  Start with the ArcGIS Living Atlas of the World for your imagery sources, and also look for local sources in your area, often served on ArcGIS Hub sites.  I provide further guidance in our data blog, here.  You could add even more challenge by asking students to build then-vs-now scenes using historic aerials, such as these in Iowa or these in Minneapolis (going back to the 1920s!) or even these from the spy program from the Cold War!  You could even tie another theme in with this activity, such as settlement patterns, river systems, landforms (as I wrote about recently), or others.

Additional Questions.  Consider asking, discussing, and assessing these additional questions for each study area (the area covered by the current 3D scene slide), including:

Interested in developing your own geospatial thinking assessment instrument?  The community needs your contribution!  I am asked about valid and rigorous assessment tools on a weekly basis, and the literature is full of comments about the relative lack of these tools.  Besides the assessments mentioned above, another helpful framework you could use is the Structured Geospatial Analytical Method from Penn State.  It begins with asking "how can one teach the cognitive skills needed to approach geospatial analysis?"  To see this in action, examine the Learner's Guide to Geospatial Analysis.  Other useful frameworks are this geoscience habits of mind and the document that in many ways started the renewed emphasis on fostering spatial thinking through geotechnologies, the 2006 NRC report Learning to Think Spatially.

But I also encourage you to make rigorous use of web maps, 3D scenes, web mapping applications such as story maps and dashboards, spatial analysis tools, and other capabilities in the ArcGIS platform to foster spatial and critical thinking.  In so doing, I am sure you will think of many creative ways to assess your students' work.