Python Script to Project Shapefiles in a folder

I am very, very new to Python and I am trying to write a script that will allow me to Project shapefiles into a coordinate system that is assigned to one particular shapefile in a folder. So I have 4 files and one has that which I want to re-Project the others into. What I am struggling with is the output CS parameter required by the Project_management tool when called in the script. I get an error message saying that the output Coordinate System value and the outputFC parameter is not valid. I'm wondering where I'm going wrong.

Any help at all would be so greatly appreciated. 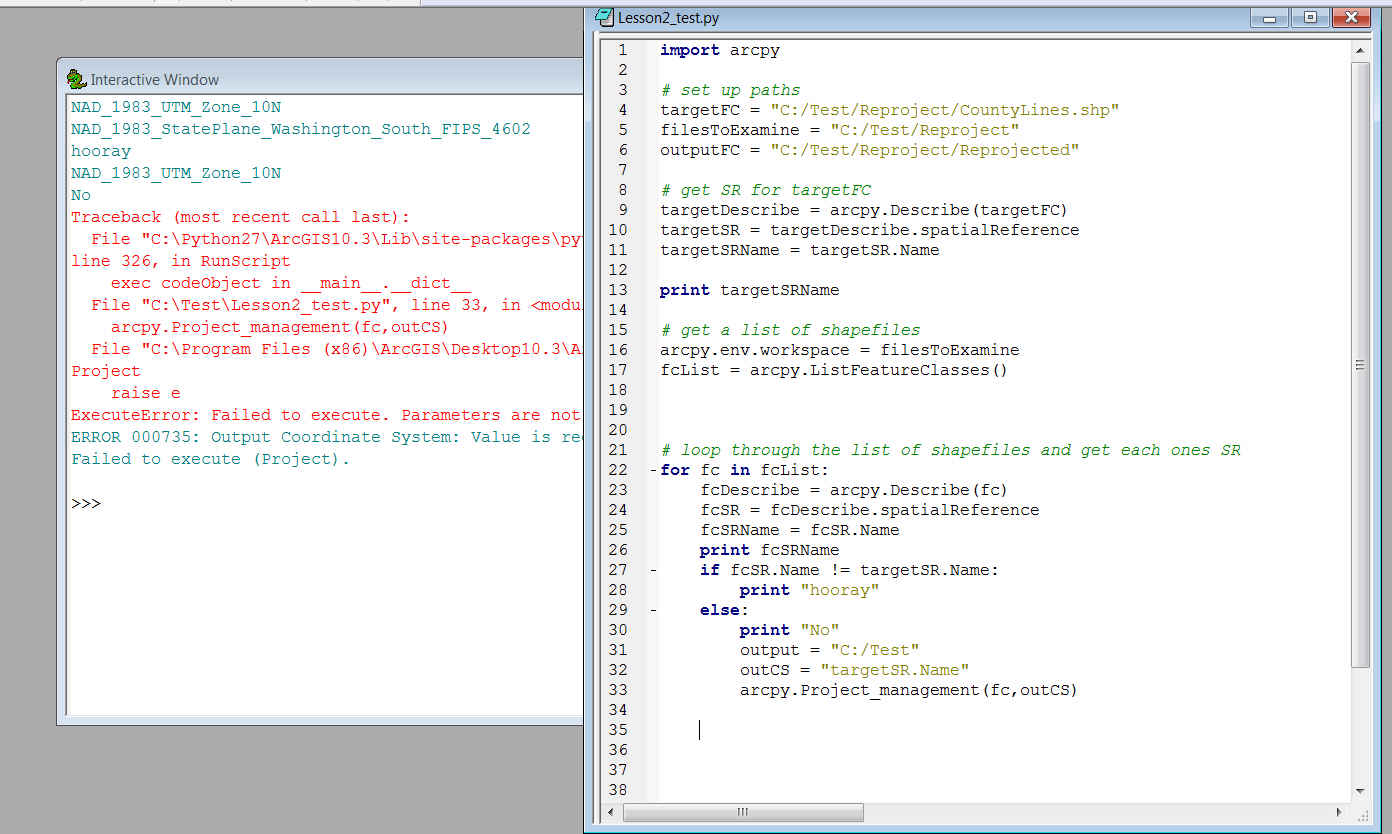 ok...even if it succeeds in your if else block it isn't going to project the file and you aren't giving it a coordinate system, just a name, also, you should add an arcpy overwriteoutputs line so you can experiment and overwrite stuff otherwise you will get a whole load of other errors.

Dan I found what you were talking about in the Project 2 sample script:

it was only a matter of time

It looks like you are printing "hooray" if the don't match (!=) and trying to project them if they do.   Try changing the != to ==  for the first part.

Then, as Dan mentioned, you have issues with you output, in fact the path set in the variable output isn't used.  But, that is all part of the learning process.  My guess is that is the reason you are creating the script, and not just running it once manually, then double clicking the command in the results tab and changing the input and output shape file?

​ Hmm thankyou Rebecca. I am trying hard to get this.

CS is supposed to be iterated.

The print statements were just supposed to iterate which shapefiles were

supposed to be projected, or not.​

because I at least have a set of files that I know should be re projected.

So where should I put the == statement

I appreciate any continued help!

A tip for the future, when posting a question, it will help others help you if you follow the tips here Posting Code blocks in the new GeoNet​    But since it was a short script, I went ahead and started playing with the code myself.  Dan had some good comments (and some help sources that you should look thru), but I've re-written the code...keeping the main flow of your script....but have the actual project comment commented out.  I haven't quite got the correct syntax for that yet, but this may help you see some of the other issues you have.

UPDATED:  this should work.  Update your paths, and the targetFC of course.  You had several this that needed fixing.  Read thru this and hopefully you will see what it all means, but ask questions if it doesn't make sense.  Keep in mind that shapefiles have a .prj file to assign the projection, and if this is missing the command will have problem projecting.  A missing projection will cause issues for any feature class, but shapefiles in particular are a bit more simplistic, so to speak.

response and I am so new to Python that I am thoroughly confused.

I also appreciate Dans replies and I am learning from all of it!

Also, I will go through the documentation that you and Dan have

advised me to do both in posting and in realizing the skillset.

Thankyou very much, very much.

I'm trying right now and again, I appreciate your assistance.

Rebecca this is really helpful and I so appreciate it.

Thanks so much for this information.

I will follow your direction as per information on the GeoNet site.