I I received a polygon shapefile for lower Indian admin areas, admin3. The layer does not align properly with other Indian administrative boundaries, admin2, that are defined as geographic WGS84.

The strange thing is this undefined layer comes in the data frame in decimal degrees but it seems to have been projected at one point and probably defined incorrectly.  I've tried to define the coordinate system using various Indian datums and spheriods with no luck.

If anyone have any advice about how this layer may be defined I'd be very appreciative.

Iam Attaching the Adm3 too as requested.

Looking at the data of "l03", it may be beyond repair. Did you have a look at the attributes?

If you compare both datasets (apart from the additional area in the north) it seam to be a dissolve of the field "NAME_1" in "IND_adm2". It may be better to dissolve the featureclass IND_adm2 based on the field NAME_1.

Thanks for your quick reply. Yes, I noticed the attribute table is corrupted. I was hoping to still be able to use the data if I can figure out why the data won't line up.

Also had a look at the data.

This offset is far too large to be a different datum issue. The direction of offset also seems to be in different directions from west to east.

I think feature I03 is unsavable. Probably relates back to its original source and its projection parameters. It also looks much more generalized than IND_adm2. ie it was captured from something 5mill scale or something. Why do you need it anyway?

Thanks for taking the time to look at the data. I agree about the datum: the offset is too large to be a datum issue.

We need lower admin level polgons for a project in India and we cannot find them besides this one. If we can't find them we will have to digitize ourselves using scanned topographic maps. So, if I could get that admin3 to work, it would save a lot of time.

What do you think about using the spatial adjustment tool bar to yang it inline with the admin2?

Thanks again for sharing your thoughts on this.

I will attach the corrected admin boundaries in a few minutes.

Iam attaching the correct Adm1 boundary which aligns with your Adm2.

Do let me know if you need any other info. 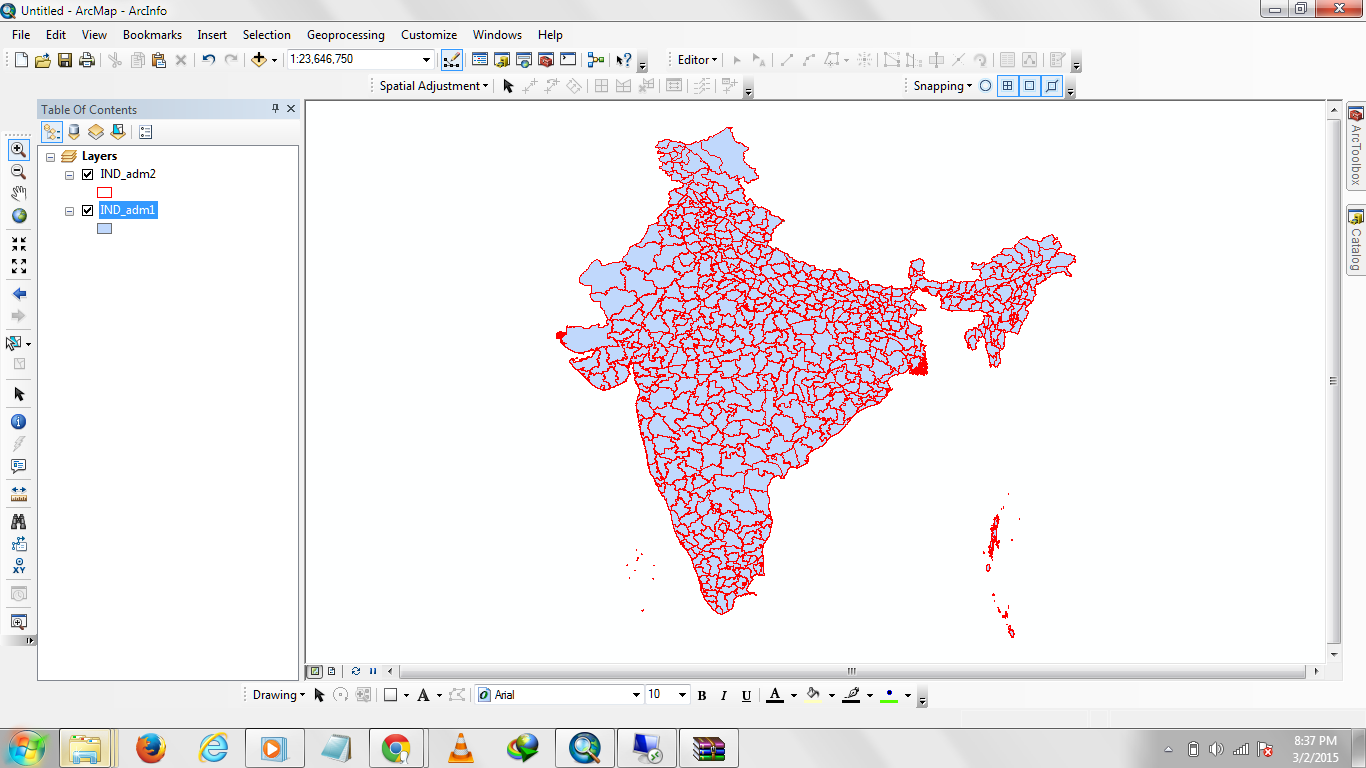 Thanks for sending the admin1 layer through. This is from GADM, correct?

So if you have admin3 or lower, please send it through.

Iam Attaching the Adm3 too as requested.

Do you have anything lower than this?