Allow users to see what users are using arc licenses

Recently I took over IT administration from our former administrator. Before he left we had a script that would allow any user to run it and see how many licenses are in use and the name of who is using them. We need this script as we have limited licenses and sometimes a user will forget to log out and we need to force them out.

I am not proficient in coding and am looking for a way to recreate this script as it has disappeared from our shared drive.

It just needs to be a simple "Who is using a license" based off of their usernames or pc user names. Does anyone have any idea how this would be done? The original script was a batch files called license.bat. I can still see the shortcuts to the original file, but the file is gone.

I have spent hours looking for the script and it was not moved.

Any help is GREATLY appreciated.

We're using "Where Have All The Licenses Gone" (WHATLG), which I found on GeoNet. It's kinda old, but works well enough for our purposes. If you search that name, you should be able to find multiple threads about it. 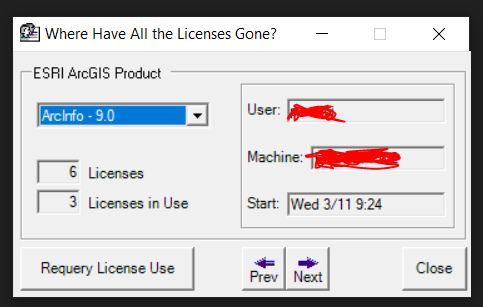 Do you have a download link? The link supplied by all of the users in the forum I can find is a dead link now. I would love to try this and see if it will work for us!

I emailed you. Thank you!