I am a little frustrated with the Map Tour storymap at the moment- I have a tour of tracks, waypoints and images of my recent trip to Havana Cuba... and am trying to edit some of the captions, AND would like to add a few additional images.  I have approximately 67 images in the map tour now, and would like to add perhaps 5 more photographs, and perhaps a few sketches.

I can change the caption, but when I attempt to "save", I often/usually get the "unable to save now" message.  SOMETIMES, it seems to save... however when I verify that possibly-saved-change (to the caption) it shows as the original caption, no different..  For instance, I would like to change the caption on image 3, to read "Plaza de la Revolucion" rather than Revolutionary Square.   Nothing changes "for real".

I have tried using Chrome, Firefox, and Edge.  All behave the same way.  I tried another computer here at home- same thing.  Images are on Flikr, as picasaweb has become so unfriendly.  (On another note... when will the picasaweb icon be removed from the map tour build-wizard interface? When will we be able to use google photos for this application?)

screen capture of "not saving" 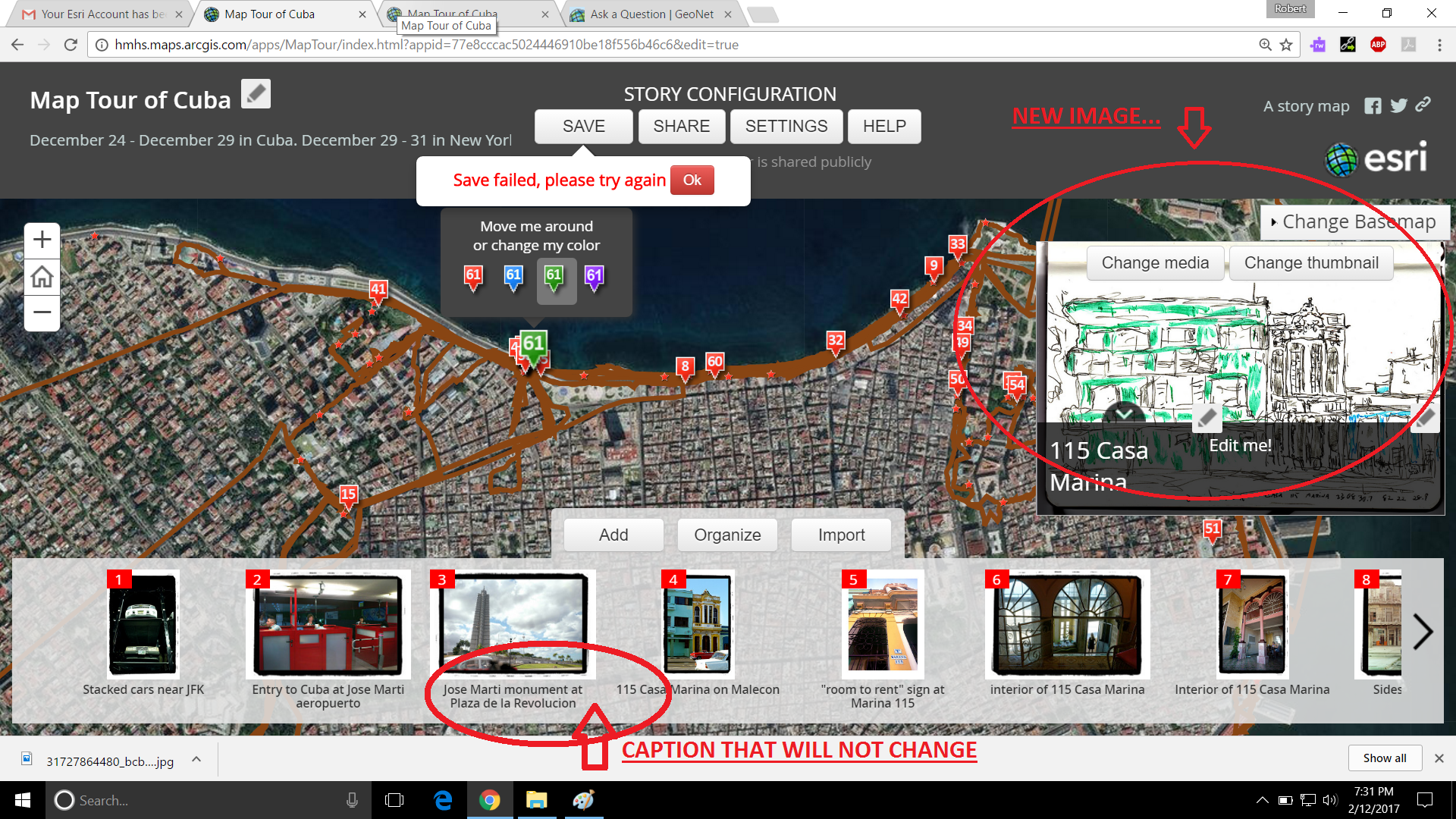 This morning, I started over, and was successful.  SO... I thought I would go back to the original maptour, and try editing/importing again.  And, the edit and import, and SAVE was successful.

The only difference is... a new day, a new morning AND, a faster internet connection, as I am now at school, whereas yesterday, I was working at home.  Could it be internet speed is a factor in ability to edit/modify in build mode?

That is a nice map. Can you be more specific on where you are seeing errors and maybe post screen shots of this?

I don't think this should work this way, but since the photos are hosted in Flickr, if you change the Flickr description, does your story map reflect this?

Here is the info on Google Photos:

Bob:  Hmm... very strange.  I would say - 1.  Adjust the title of your story map slightly and save with new name.  2.  Clear history from browser and re-start browser.  3.  Resize and rename any photo that seems to be the focus of the problem, delete from map and add new photo.

Thanks for the suggestions, Joseph and Adrian.  The problem is not the cache, it is not the browser, it is not re-sizing and changing the images... it does not seem to be a flickr problem.  I do know that changing the description of the flickr album does not change the maptour, as THAT is set at the original creation of the maptour.  (Arcgis does not go out and build the maptour each time you look at it, re-checking the Flickr album... it is just when you build it that arcgis references the flickr album, and grabs caption stuff...  except for the links to the images.  THAT happens each time you load the maptour, because those links are in the maptour points layer.)

The problem seems to be ... a problem of the "maptour-builder-wizard"-created-maptour-points-layer. Something has gone "south" with that layer... I can not change/edit that layer, by using the builder-mode, of the maptour "viewer".  I CAN... go into "my content", and find the original map, and open that,  and find that point layer there... and I CAN enable editing of that point layer, open the table, and... make changes to THAT.  I did manage to change the caption (name) of image 3, and I did manage to fix the thumbnail on image 42, in both cases, by editing the table of that layer in the original map... but I still can not edit that layer in the "builder mode" of the maptour itself, which means I can not import the 6 more images that I want to add.

I think I will have to totally start over.  Which is too bad, as that link has been published, and it would be w-a-y better to fix the tour, but...

Something is wrong with the editing/saving of the maptour point layer.  Such a simple thing... but I can't fix it.

I think this may be caused by the HTML tags you've added into the name or caption of some of the places in your tour. For example place #61 has a link to a Youtube video in the name. It would be interesting to remove those tags and see if it fixes your issue. I think this is an instance of this:

Good to hear from you! Years ago, you helped me with a swipe map issue.
I tried removing the 2 hyper links, contained in the "name" section of the caption, but it still does not save.  image 54 had one, as well as 62.
I think the error message that the hyper link people had, was an issue of quotes not being in the correct place on the link?  I think mine were.... but still, with the links totally removed, the maptour does not save the "corrections".
I really really think the issue is somehow related to permissions on that map tour points layer, where-ever it is stored.
Thanks for suggestions- I am still open for more!
Sincerely,
Bob W
AND...
HI again Rupert-
I created the map... with tracks.  Then, used the maptour wizard to "build" the photos in, which were stored in flikr.  This , of course, creates the maptour points layer... in the webmap.  Right?
Last week... I WAS even able to "import" a few more images into that maptour, and all went well.
However, yesterday, after making some adjustments to 6 other images, I tried to import THOSE into the maptour, and was unsuccessful.  "unable to save" message, but not clear why.  Also, I was unable to edit the captions on the existing images.  For instance, I was unable to change that "revolutionary square" thing to "plaza de la revolucion" which I had wanted to do.
I WAS able to change the captions, but going back to that original webmap, finding the points layer... enabling editing... and then going into the table, and manually changing the table... and saving the map.
But I was still NOT able to change or edit, or import 6 more images, using the "builder mode".
I would still like to add the 6.  Actually... I CAN import the 6 new images...  But after that import, it will not save.
I tried different browsers, different computers... nothing works- I can not edit, nor add to that existing map tour points layer, except by manually editing in the original map.
Sincerely,
Bob W
Reply
0 Kudos
Highlighted

Oh, and one more thing, I did try visiting that "my stories" link, and did try looking for issues... "no issues found".

This morning, I started over, and was successful.  SO... I thought I would go back to the original maptour, and try editing/importing again.  And, the edit and import, and SAVE was successful.

The only difference is... a new day, a new morning AND, a faster internet connection, as I am now at school, whereas yesterday, I was working at home.  Could it be internet speed is a factor in ability to edit/modify in build mode?

It's a great looking map tour!

Could it be internet speed is a factor in ability to edit/modify in build mode?

I do not see how this could be a factor but maybe it could be. Seems odd though. I wonder what others have to say (or if this has happened before).