Invalid raster dataset. Failed to create raster layer. Permission Denied. How can I overcome this problem?

I'm having this issue with my ArcMap 10.6.1. I think it is probably a "permission" issue, because I cannot copy and paste files on ArcCatalog. How can I solve this? Any ideas? 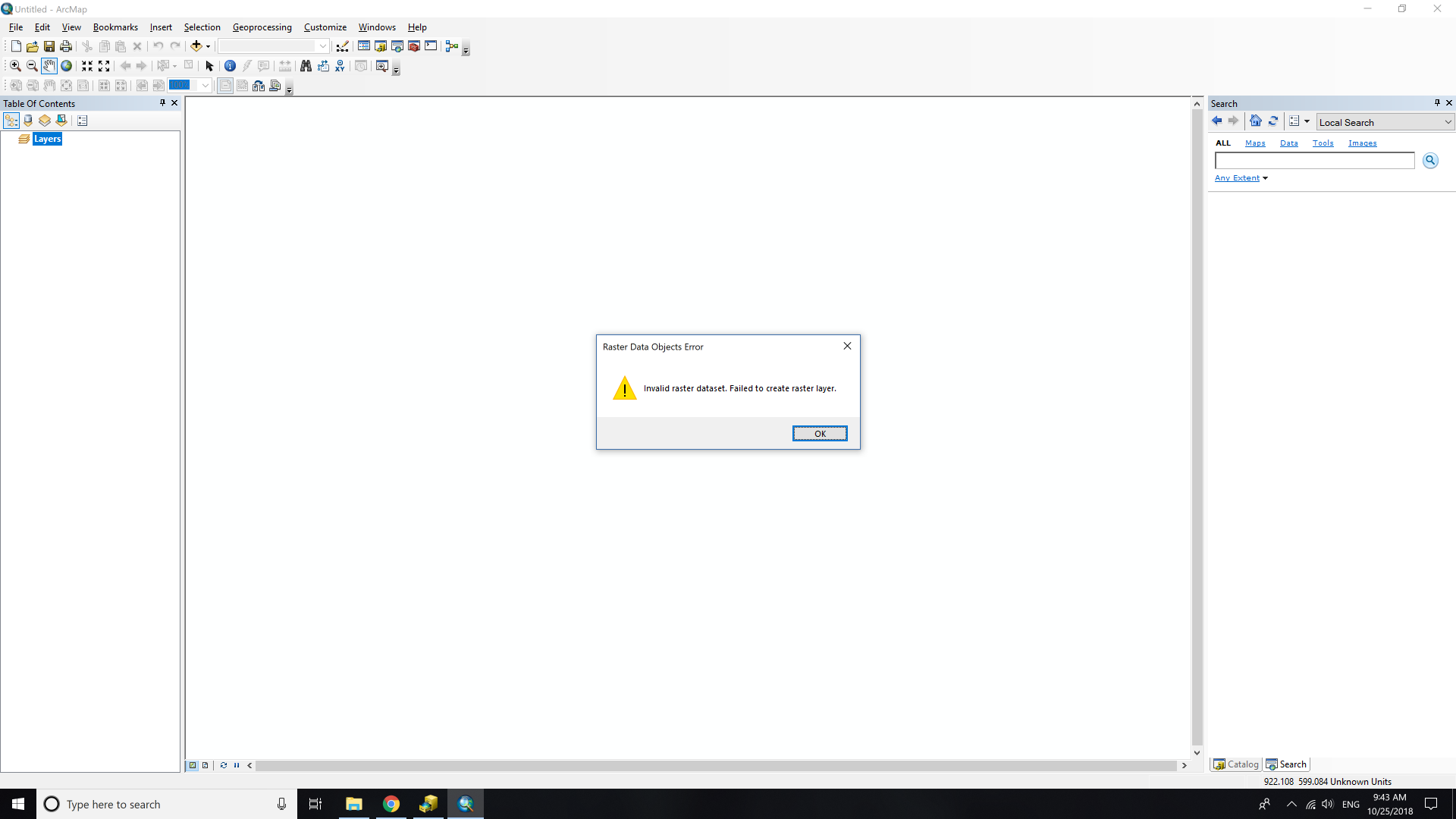 Thank you so much Dan!

I have the same problem.  We have raster files in fixed directory locations that we have used for with ArcGIS for the last two decades without any problems.  After upgrading to 10.6, we found that we can no longer access ANY of those files.  We get the message saying that we don't have access permissions.  But, by moving the files to a directory with a smaller path name, we can access them again.  So we are in the process of moving 10's of thousands of these files in hundreds of directories to new directories with path names that have to be so short that they are not going to make any sense to anyone in the future.  Plus, we are having to go back to all of our map files for the last 10 years and change the hard coded linkage to the new file locations.  Before we are done, this is going to have cost us about 100K to dumb down our directory structure to match ESRI's newly created limitations.  One step forward and three steps back, way to go ESRI.

Windows supports file paths up to 260 characters without effort, assuming you are talking about local drives.  You would be hard pressed to exceed that.

With the move to Unicode in all software, new challenges exist.

Do you have examples where paths are causing issues?  Do they have spaces, dashes, periods or other flotsam? (numbers letters and the underscore are good)

Hi, below are two examples of one of the path names that will no longer work with ArcGIS.

The first one has worked in for us in ArcGIS for years, but will no longer work with the latest ArcGIS.

The name of an Esri Grid format raster has more specific restrictions:

So you are good on the file's name, the length is less than 128 characters... but your paths contain spaces and it wouldn't be the first time this has caused issues.

As a test try creating a folder (or copy and edit the path to a new drive) with the path spaces removed,

As a more general reference, for the move to Unicode and other issues

We have done that, and it works, and we are being forced doing that, but we have hundreds and hundreds of directories and thousands of files that have worked fine for the past two decades.  I know Unix people are not allowed to use spaces in path and file names, but Windows has allowed spaces in names since the 1990's.  We do a lot of Windows programming in-house and there is nothing special to allow spaces in file and path names.  As a matter of fact, you have to go out of your way in your code to make sure that users can't insert spaces in their file names.  Its just poor programming.  ESRI has always had problems with excessive path lengths, and we have learned to live with that, but now they are screwing their whole Windows user base.  Apparently, so far, this great march backward is only with the group that has been working on their grid routines, as far as we can tell, all the other ArcGIS functions work just fine with spaces in the path and file names.

We actually had another meeting on this today.  Given the cost and the hundreds of labor ours required to go backwards, the general consensus is that it is probably going to be easier to just go back to Ver. 10.5.  Everything worked fine in that version, and we have yet to see anything in 10.6 and 10.7 that does anything for us.

You might also want to batch some conversion of the esri grids to *.tif files as backups when you are back in 10.5.

It is the preferred standalone raster format now and also avoids the sticky situation where a corrupt 'info' folder kills a bunch of grids associated with it.

And more importantly, you can batch it ...

Saw no bugs BTW, but I would contact tech support in any event.

You are right.  tif format is better.  We usually try to use that, but sometimes when in a hurry, you forget to add the extension, and you get stuck with the esri grid format.  I usually realize it just as i am pressing return.