I posted  a response to this same type of question on GitHub but thought to ask here as well, sorry for the redundancy. I was looking for an update on the zoom in capabilities that are planned as enhancements to Survey 123 and what the status might be ?

We have users that will be taking photos as part of their inspection process in the field and it is very important for them to have zoom capabilities so they get the proper photo since an inspector will be reviewing them after the Survey has been posted.

I also think it would be good if the user could click on the photo after it has been taken inside the Survey and it would enlarge the photo in a new pop. This way they can ensure that the photo is good enough and then just close the pop up when finished reviewing. From there the user can then decide to delete and retake or keep the original.

Also, any way to know what is planned for the next releases regarding all enhancements that have been documented and considered by the Survey 123 team.

Thanks in advance,
Jason Sphar

Hi,  we are working towards adding capabilities to both:

We may be able to get #1 released towards the end of the month (June 2016), but if not it will most likely be added in the next update after June 2016. We will also try to get #2 in an upcoming release.

At this moment we are wrapping up our next update in June 20th. It is planned to include a lot  of enhancements in the website at http://survey123.arcgis.com, fixes in Connect and the field app as well as some enhancements to the camera and potentially auto-suggest functionality.  Around mid-July we will add a blog post describing the road map for the rest of 2016.

Ismael Chivite​, We have a select_one with images for each choice. Can these thumbnail sized images also be enlarged?

Hi. Yes. Images associated with select_one choices can be enlarged by simply tapping on them. This is already implemented.

Thank you for the info. Maybe attached photos could have similar thumbnails and click to enlarge?

Yes, that is the idea. You will be able to enlarge photo previews in image type of questions. Also a zoom-in option in the camera is planned to be added so you can capture more detailed photos of things. It is in the back-log.

Hi there, I am trying to do exactly the same as identified in point 1 above - zoom in using the camera in the app. We are using iPhones and iPads with the latest version of Survey123 and I cant see the option to zoom.  Am I missing something? Thanks!

I had thought to start a new thread but since we are on the topic of photos I wanted to ask if there is a way to fix the incorrect date that appears on the photo after it is taken? Not sure this is happening to everyone but for some reason we are experiencing an issue where the photos have a time stamp that is 1 month older than the date that it was taken.  Example, the photo below was taken today on June 8th 2016 and it shows a date of May 8th 2016.  Thanks, Jason 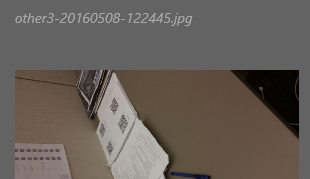 Hi Jason. Expect this fix either in our end of July or September update.