I recently had a need to modify a survey schema (Field Length from 1000 to 20000 DON'T ASK! HAHA!!) that had been originally developed using Survey123 Web Designer.  Of course, all the GeoNet posts state, this could not be accomplished once the survey had been published.

I developed a 'Test' Survey utilizing the exact same attributes and schema from the original survey and submitted numerous surveys through the browser, field app, and desktop app.  All the submission data was then exported into a .csv file to back up what had been submitted.

In the #survey123.com website 'Design' tab, I duplicated each question that needed to have it's schema modified.  The Web Designer automatically labeled the copies with the original name plus '- Copy'.  Each duplicated question's label was then edited to remove '- Copy'.  Thereby making a carbon copy of the original question including schema (For now).

Then the old questions were deleted by previously identifying their number within the entire survey ensuring the new questions were not accidentally deleted.  A popup (Shown Below) wanted a confirmation of the deletion and then stated any previously captured data could be deleted or not during the publishing phase.  I clicked 'Yes' and did not check the 'Don't ask me to confirm again' box, because I always like a safety measure in place to stop potential accidental changes. 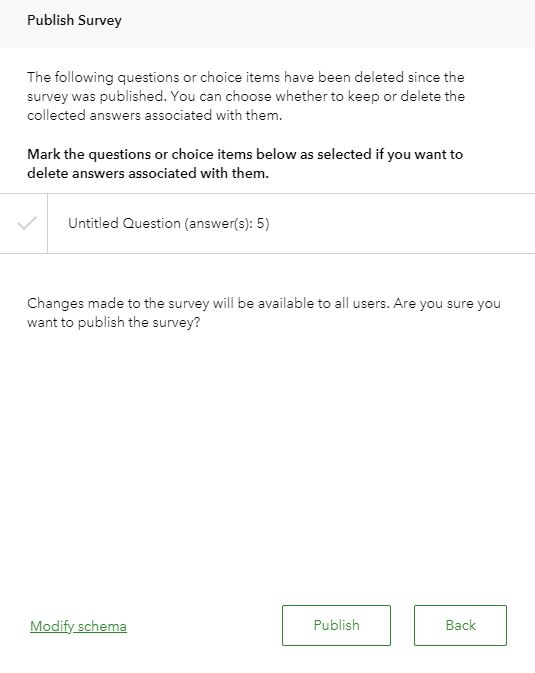 I opened this modified survey through the browser, field app, and desktop app and completed numerous submissions within each of them.  I ensured this new survey could handle the larger field length by pasting text that was greater than the previous 1,000 field length, text 1 character length less than the maximum, and text greater than the new schema.

Under the 'Collaborate' tab within the Survey123 website, all previously submitted surveys had harmoniously merged with the new submissions as though the changes never happened.  I verified this by exporting the new data set and comparing it against the first .csv.

Based on your post, do you have an outstanding issue that required follow up or explanation? Did the changes you made result in the outcome you wanted?

Zhifang Wang‌ Can you take a look at this post and see if any of the steps detailed have resulted in behaviour we did not expect?