Survey Error in Web Browser: You are not a field worker or survey owner.

I published a survey from Survey123 Connect (2.6.4) and set the Collaboration settings (submit and view) to share with my organization. When the survey is launched in a browser, I get the error "You cannot submit record to the survey since you are not field worker or the survey owner." The survey will open through the Survey123 app, but this error appears for all browsers (Chrome, IE, and Firefox). I tried clearing my browser caches and going through ArcGIS Online to clear the share settings as suggested here https://community.esri.com/thread/188233-error-on-saving-collaboration-settings-changes Any suggestions? Or is this a bug that others have experienced?

It sounds like there is something that is preventing access to the feature service.  Can you provide more details on the form and feature service- is this using an existing feature service or one that Connect made when publishing the form?  Is this ArcGIS Online or ArcGIS Enterprise?

The feature service would have been made by Connect when publishing the form. I thought there might be something going on in the background with the feature service when I got the error this morning. To get a fresh start, I deleted my original survey in Survey123, Connect, and ArcGIS Online, and then created a new one from scratch in Connect using the advanced template to cut any ties to the previous survey. I'm working through ArcGIS Online.

Determining what exactly what is wrong might take some back & forth debugging - can I ask that you file an request with Esri Support, who can do that type of work with you?

Thanks, James, for always responding so quickly! I'll contact support and see if we can get it worked out.

I just wanted to point out that I've hit a similar issue using Survey 123 Web.

But I realized the issue was caused by a change I've made to the layer name in the fieldworker Hosted Feature Layer generated with the survey.

As you can see below, from the fieldworker hosted feature layer view, I've changed the layer from "surveyPoint" to "Citizen Storm Reports". If I change it back to "surveyPoint" this issue is resolved! 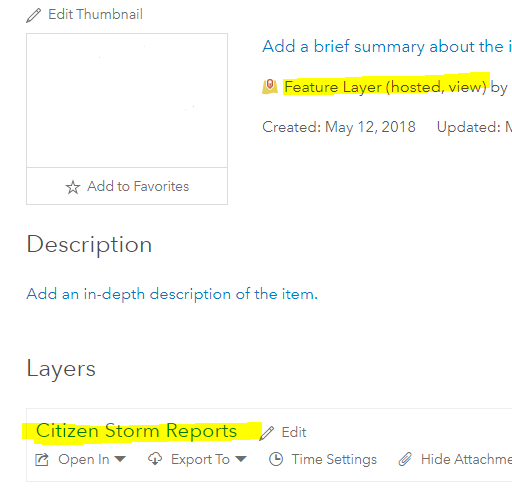 Thanks to some troubleshooting with ESRI support, the cause of this error was found to be a browser-version limitation in Survey123. The error is caused by using a form_id in the settings of the xls in Survey123 Connect. While using the form_id will cause the web browser error, the instance_name is still viable and will provide a customized name per submitted form in the inbox, while still allowing the survey to be used in the app or in a browser.

"The error is caused by using a form_id..."  The form_id is the name that will be used for the FGDB when it's exported is that going to affect anything else?  Can you leave the form_id empty?

I've left the form id empty in my survey, and it works fine. I don't do a lot of data management in the background using the geodatabase for my survey, though, so I'm not sure if it will have any impact on the data storage/analysis.

I ran into the same issue. My fix was to update the URL from http to https in the items Settings page for the Survey123 form.