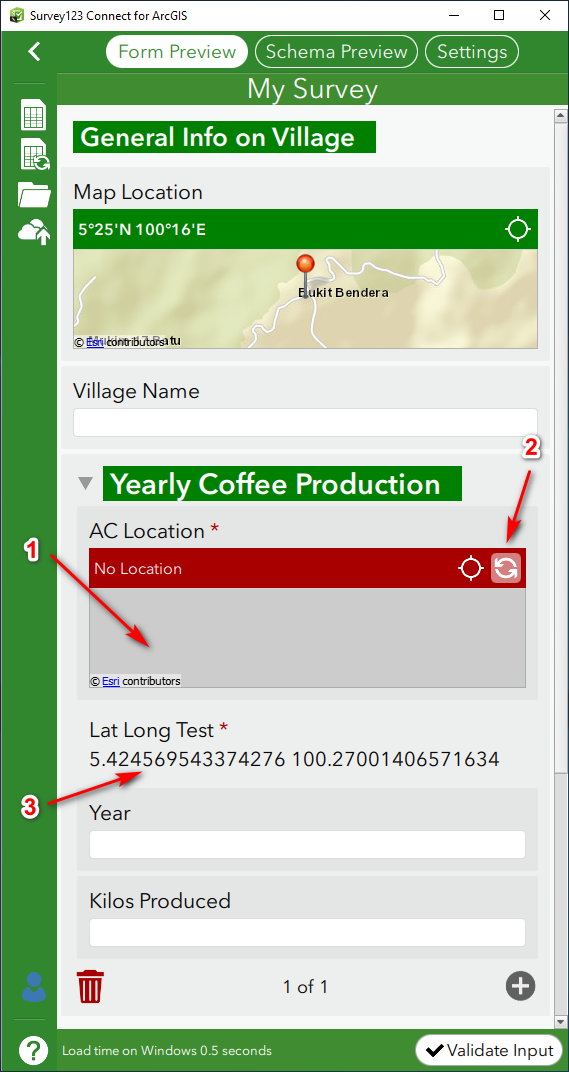 Below is a screenshot of the excel version of the form. (I also attached it in case it's too small

.) For the purposes of this illustration I hid all of the columns that were blank.

So my questions are:

1.  Is there any way to make my form work like it previously did where the user does not have to hit refresh button in the related table to get the geopoint values from the parent table.

3.  Am I even going about this the right way? I need the attributes from the related table to be "mappable" and the only way I can figure out how to do this is by adding a geopoint field to each related table that I want to map. Is there another way to map data that is located in a related table? If so, any advice on this topic would be greatly appreciated.

This sounds like an issue that has been addressed for the next release of Survey123.  If you can, could you log in the Early Adopter Community and confirm that the pulldata function is working properly in the 3.5 betas?

Thank you for the suggestion. I downloaded Survey123 Connect 3.5.152 beta from the Early Adopter Community site and at first glance it looked like the problem was solved. When I changed the geopoint location on the parent table, the geopoint location on the related table correctly changed as well for the first related record (see screenshot below). The "Coordinates Test" field also reflected the correctly adjusted coordinates. 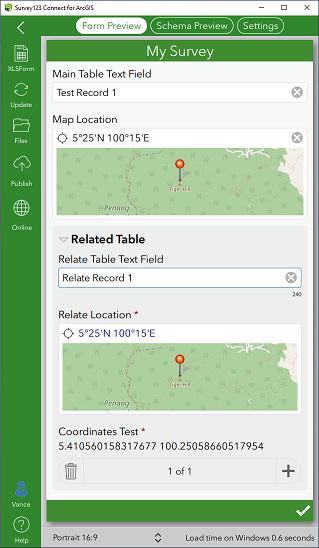 However, when I added a second record to the related table, the form spent a few seconds acquiring my current location instead of pulling the coordinates from the parent table geopoint. (The screenshot below was taken during the coordinate acquisition time as you can see by the satellite symbol to the right of "My Survey".) 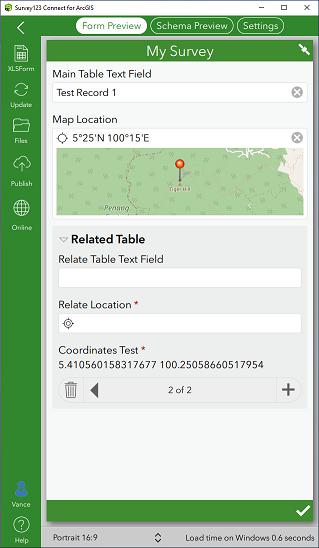 After acquiring my current coordinates, the related table map show my current location, not the pulled data location from the main table geopoint field as it should have been. This can be seen the the screenshot below in which the two maps are different. (I intentionally smudged my location and coordinates.) The "Coordinates Test" text does show the correctly location of the parent geopoint map however. I used the exact same formula for the "Coordinate Test" text field and the "Relate Location" geopoint field which was as follows: pulldata("@geopoint", ${location}, "y")+" "+pulldata("@geopoint", ${location}, "x") 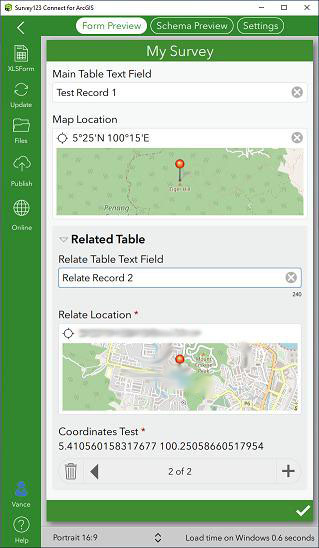 Attached is the very short (8 lines) Survey123 form for the above screenshots which highlights this issue. I'm pretty sure that I've set it up correctly. As I mentioned in my previous post, in previous versions of Survey123 I didn't have this issue. Any help on this would be greatly appreciated.

I can see the behavior you are describing.  I have filed an issue to look into it.

Just an update on this issue.

We a working on a fix that will address the issue you've described here. The behaviour is occurring due to the timing of initialising a location from within the repeat. You will notice that if you move the parent geopoint while the repeated geopoint is aquiring your location, the repeat location will be immediately pulled from the parent. If that initialising isn't interrupted by moving the parent geopoint (which triggers the coord calculation), you will only get your current location as you described.

A possible workaround for now is to remove the readonly from your repeat geopoint so that you are presented with a recalculate button. Recalculating the location will have the same effect as moving the parent location.

I tested it out and it works great now. Thanks so much.

Hello phillip Wilson‌ - are you able to confirm if passing geopoint coordinates from the "parent" record to a repeat geopoint is not supported in the web form? I have successfully been using it in the mobile app, but it doesn't seem to work in the web form.