The best way to tackle a big problem is to break it down into smaller ones. Lists are no different. Choice filters let you leverage user-entered values in your form to dynamically control which elements of a list are shown or hidden. The most common use for a choice filter is to construct what is known in XLSForm jargon as a cascading select, where a selection in a list (for example countries), controls the contents of a second list (for example, States, or regions within that country).  However, as we will see in this article, choice filters can be used well beyond cascading selects.

This blog introduces choice filters in Survey123 and some common techniques to work with them effectively. If you are already familiar with choice filters and cascading selects, you may still want to read this article as it describes a few new interesting things added in version 3.11 (October 2020).

If you are not familiar with choice filters, XLSForms or Survey123 Connect, you may find this content a bit steep. I suggest you watch this 2 minute video with an introduction to XLSForm select questions to warm up. This is not rocket science, but basic familiarity with Survey123 Connect and XLSForms is assumed.

In XLSForm jargon, choice filters are often associated with the notion of 'cascading selects'. The idea is that a selection in one list, determines which values will be presented in the following list. Say we have a list of countries, and a second list of regions. As you select a country in the first list, you want the second list to just show regions for that country.

Below is what the countries and regions cascading select example could look like:

Building your own cascading select is pretty easy. Here is a brief step by step guide using a hyper-simplified countries and regions example:

If you have been using choice filters for a while with Survey123, I bet your choice_filter expression would have looked like this: country=${country} instead of selected(${country},country).  Both expressions are correct. We will talk more about the differences between these two expressions, and when to best use one or the other, later in this blog in the 'Working with very large lists'.

In the previous example we constructed what is known as a cascading select. You can cascade, or chain, as many selects as you like. For example, you can add a cities list next:

In the choices worksheet, note that I added a new region column for the cities list. 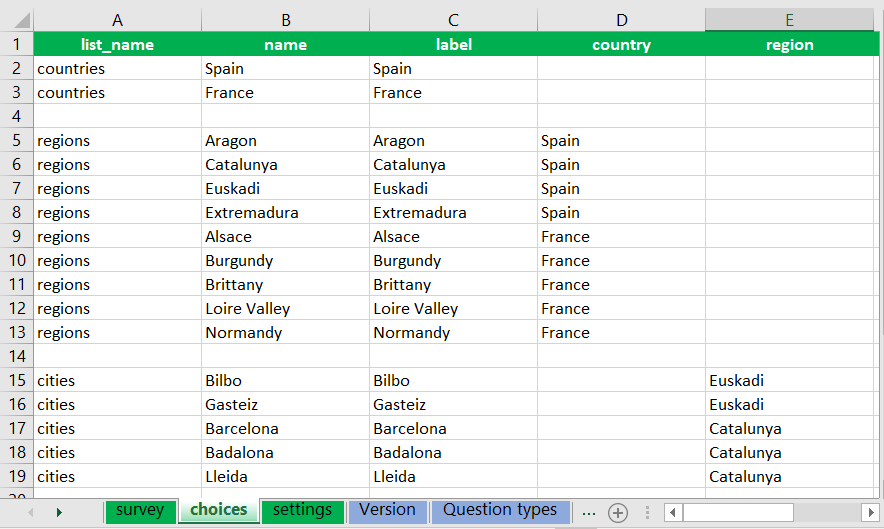 In the survey worksheet, I added a new select_one question for the cities and its corresponding choice_filter.

You can apply choice filters to select_one and select_multiple questions. In the example below, note that I converted the regions and cities questions into checklists. Say for example, you visited Spain. Then I want users to select all the regions they visited in Spain, and also all the cities visited within these regions.

To do the above, I simply changed the type of questions from select_one to select_multiple.  Since the selected() function works for all select questions (select_one and select_multiple), you do not need to change the choice_filter.

Given that the choice_filter column can evaluate XLSForm expressions, you can get creative in the way you apply filters to lists.  The key concept to understand is the following:

With the above in mind, here are some ideas:

Unlike the countries and regions example we explored earlier, in this case elements from the filtered list can appear multiple times. For example, Patricia is an electrician, gardener and welder. As shown in the screenshot below I added a skills column to the contractors list. This column includes a comma separated list of the skills of each contractor.

To find if a particular skill is present within the skills column, we can use a regular expression such as regex(skills, ${skill}). Alternatively, we can also use contains(skills, ${skill}).  Other string functions such as starts-with() or ends-with() can be handy as well.

As usual, using the survey samples that come with Connect is often the best. In Survey123 Connect, create a new survey and select the Cascading Select sample. You will find in there a few additional great examples illustrating the different patterns you can follow to create filter expressions.

Very long lists can slow down your survey.  The definition of a 'long list' varies. It varies depending on the compute power of your device as well as the size of your survey. Generally speaking, you should not worry too much about performance when working with lists under 500 records, but as you get to that threshold, you may want to consider a few tips to optimize lists in your survey.

There are different aspects that require your consideration when working with long lists:

Survey123 supports multiple ways to display lists. By default, choices in a list are directly presented in the form. In this way, end users can see right away all the choices and tap on them quickly.  This default appearance, is great for very small lists (under 10 elements). For lists that grow larger, this default appearance is not adequate because it forces users to scroll the entire form in order to see elements at the bottom.  If the list grows even larger, the initial loading time of your form will be negatively affected because the default appearance forces Survey123 to render every choice in the list within the form.

You can also use the autocomplete the appearance. With autocomplete, the dropdown list will not show any choices until the user starts typing. This also saves time because only elements in the list that match the user input need to be rendered. For very long lists, autocomplete is often the best option for both the end user as well as to speed up your survey behavior. 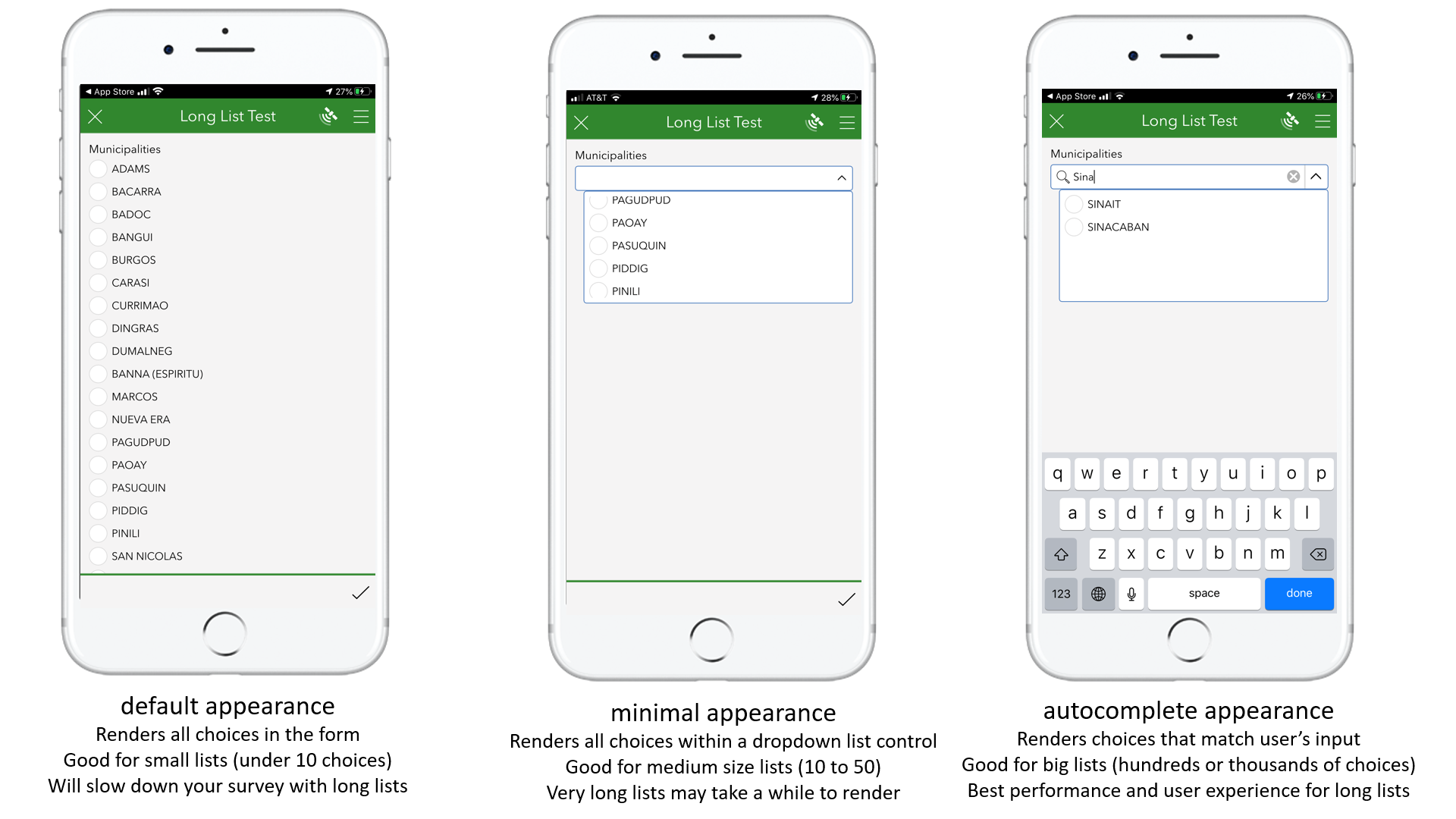 Ultimately, you will need to choose what appearance works best for you. The performance differences of these different options will vary depending on your device too. As I wrote this article, I measured how much time a list with 1,500 elements took to load using the different appearances. Autocomplete was the winner. It reduced loading time 400% when compared to the default appearance and it was also slightly faster than the minimal appearance.

The XLSForm below shows how these new types could be used. The number of municipalities in the Philippines is roughly 1,500. Already a big list, so we are using a select_one_from_file. Note that the list name referenced in this question is referencing a csv file called municipalities.csv. Municipalities are broken down into barangays. As of 2020, there are more than 40,000 barangays in the Philippines. So again, we use a _from_file select to speed up loading time and filtering.  Note that in this case we choose a select_multiple_from_file and also applied a choice filter.

The contents of the csv files are not much different from what is included in the standard XLSForm choices worksheet. The list_name column is not needed, as the name of the list is defined by the csv file name (no spaces allowed in the name). The name and label columns for choices in your list are mandatory and any other column (language columns, media, image, etc) are optional.

I want to emphasize here that using external csv files for your lists is adequate for very long lists (over 500 choices), but it is not going to necessarily add much, other than overhead to you, for smaller lists. Keeping lists in the choices worksheet of your XLSForm is a very valid and convenient approach.  For most of your forms, you will want to keep your list definitions in there.  It is only when you work with monster lists that _from_file selects will help you.

The use of _from_file selects supports both select_one questions (select_one_from_file) and select_multiple (select_multiple_from_file).  You can also apply choice filters, calculations, constraints and any other XLSForm tricks you already.  Other than where the list is stored (external file versus the choices worksheet in your XLSForm), your XLSForm authoring experience should remain the same.

How you write your choice filter expressions can impact performance as well. The fastest choice filters are those using simple comparison operators. For example:

You should not be afraid of using selected(), regex() and other functions as performance will generally be pretty good, but if you want to squeeze the best of your device, simple operators will help.

As you can see, there is a lot around choice filters in Survey123. If you would like to see more examples of expressions you can apply, check the Cascading Selects sample included in Connect. 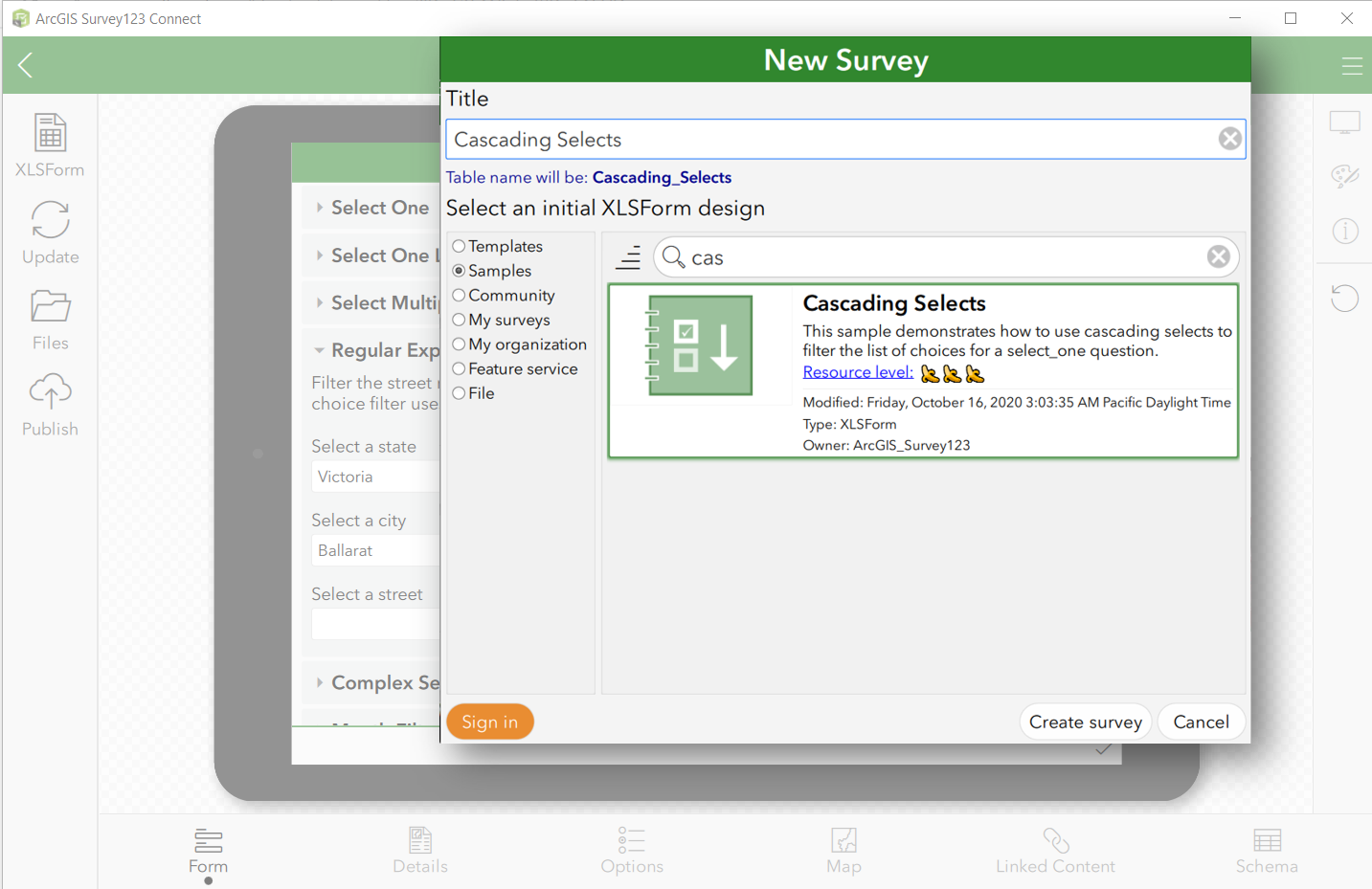