I have a project with a parcel feature class joined to a standalone table.

The join works great and I also have a definition query on the joined feature class that functions as expected.  When I select a record in the attribute table and right click the record to zoom to it (or pan or flash, etc.), the entire data set flashes or it zooms to the entire extent and shows all features selected on my screen...even though only 1 record is selected in the table.  At the bottom of the table it shows that only 1 record of the 28 is selected but I can't zoom to that feature. I also can't switch the table view to see just the selected records. This seems to be because of the join.  When I take the join off, the zoom/flash/pan-to works fine and all functionality is back.  Even when I remove the definition query (with the join remaining) I still have this problem...so it appears that the join is the issue.  Has anyone else run into this issue? I really need to be able to work with the data in a joined fashion. 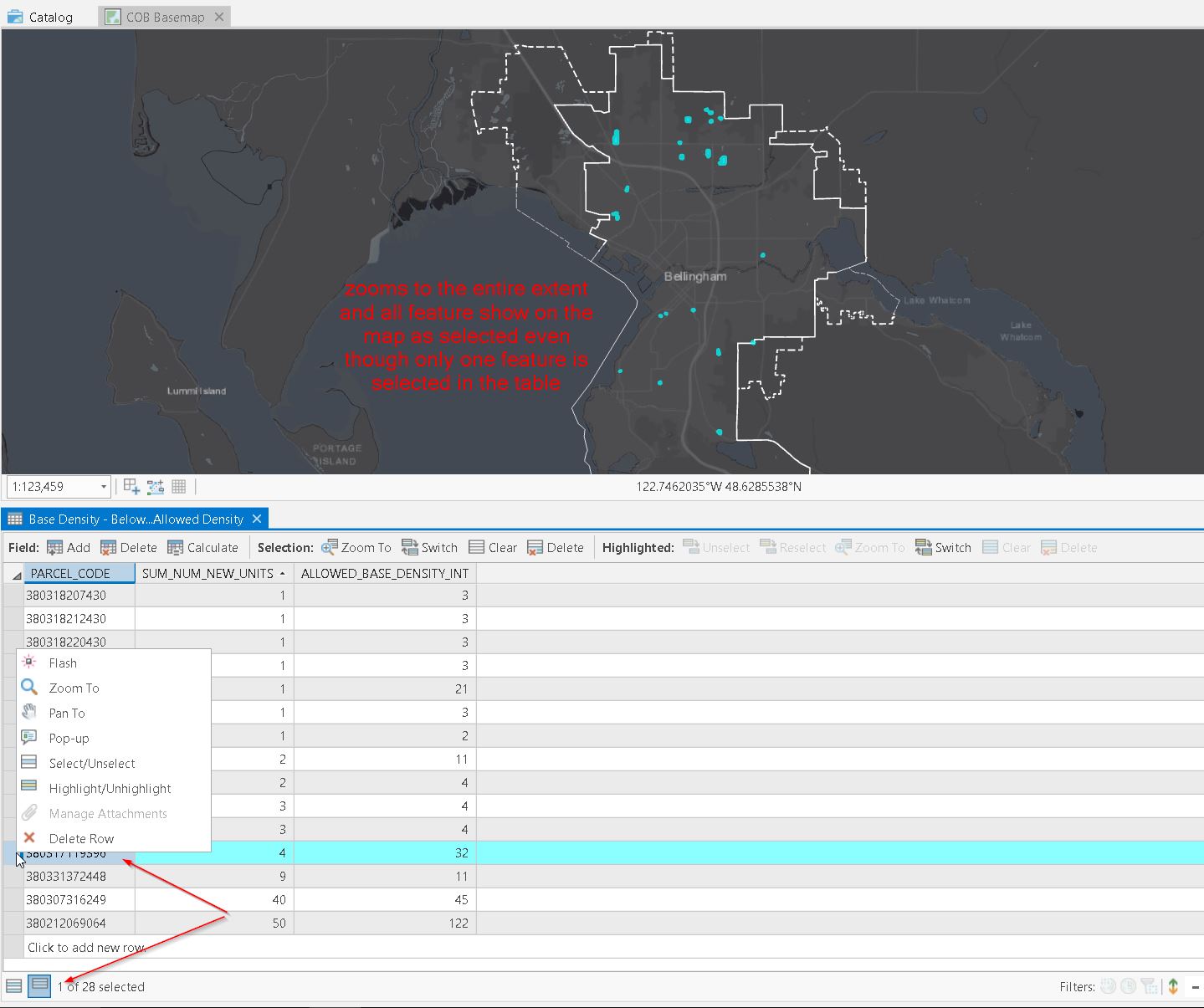 The file geodatabase was created manually in ArcCatalog (Desktop).  The feature class that is problematic is created through a python script as part of a huge process that aims to show achieved density vs zoned density.  The only part of the python script that involves this layer (copy of parcel layer) is where I copy it from SDE and place it into the file geodatabase and strip/replace some values in the address field (since our assessor address field is messy).  Beyond that it is used in joins in the script only to attribute other featureclasses and is not actually altered.

Here is the portion of the script that creates the copy...super straightforward but obviously PRO doesn't like it.

In order to share my data, I probably need to strip everything out of the parcel featureclass other than the parcel number, as I'm not sure our county would want us sharing that publicly.  I'll try to do that and attach.

Totally blank would be fine.

I also have a new workstation and install of ArcGIS Pro, so this could be playing into this as well...some strange new setting? I appreciate you looking into it.  I'm also ready to throw in the towel and work in ArcMap as deadlines approach.

UPDATE: As part of the huge python script the this featureclass is a part of, at the end of the script I added code to delete the parcel copy and re-copy it into the file geodatabase, then compact the database.  This has fixed the issue.  Still not clear where or why it is getting corrupt in the script, as really there is very little other than the copy and field calcs being done to that feature class...but somehow it is gets messed up.  There were no errors when I ran fix geometry, so not exactly sure.  I'm guessing your theory on "...it appears that Pro has higher data quality standards than ArcMap" is playing into this as the issue never arose in ArcMap.

This might shed some light: So I imported your schema XML with data into a new FGDB, and got this when compressing it: 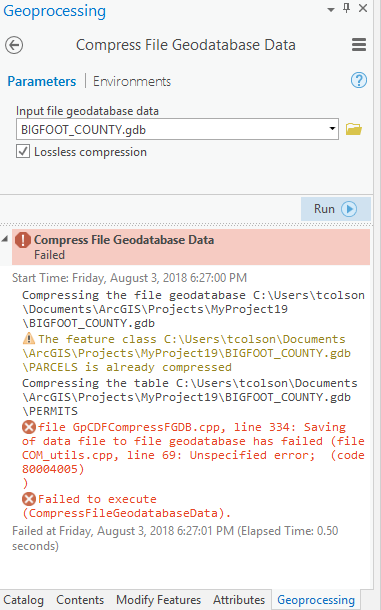 For Reports, it looks like they're looking for use cases: Creating Reports in Pro. I never was impressed with the report function in Arc, I do all my reports in SSRS, so won't be much of a soldier in this fight!

Kory Kramer‌ Kate Newell  I am able to repro:

I don't think it's a data issue, I think it's a field type and "Keep Common" issue. I was going to try with different field types, but it's "Miller Time"....

Kate, I share your frustration, but glad you brought this issue to Geonet, where at least half of my problems get solved by others far smarter than me. Unfortunately, I really don't have a work-around for this one. I trust that Kory will be able to get this in front of the right folks.

Thank you so much Thomas and Kory.  I appreciate the time and effort.  Enjoy your weekend.

i have the same problem.

one polygon Feature Class with 3400 records on it and 1 File Geodatabase table (imported by "excel to table" tool) with 137 records on it, joined by "add join" tool (unchecking the option "keep all target Features")

after join operation, "zoom to selection" (or any other selection method) doesn't seems to be work very well. all elements appear to be selected in the map view tab, when i select one o more in table view tab.

same problem when use mouse with "select by polygon" in the map view tab.

if option "keep all target Features" checked there is no problem at all.