"Layouts" for a long route

I am working on documenting a proposed rail trail through a few towns. It is a very long route with several sections. I am hoping to feature each section with it's own layouts. As there are 8 sections, I hope to show the route of the trail, the parcels that the trail crosses, and the proposed facilities on different layouts... for each section. I am hoping to save editable layouts for each section so that if there are future updates to the route, it won't take much work for me to come back and re-export the map to show updated information.

My attempt to do this however, did not work out as intended. I had originally tried to make layouts for each section and then I would save the layout as its own layout file. The problem that I encountered with this is that apparently when I would save a layout file, the map content is no longer affiliated with the original map data.

This isn't what I had hoped to do at all. It's important for me to preserve each layer's relationship to the original map file so that any modifications made to the route data can be updated in the future.

Can somebody point me in the right direction for this? I'm sure this isn't a very sophisticated thing that I'm trying to do, I just don't know what it is I should be doing instead.

The end goal is for me to have a map file that I keep up to date, and then many layouts of that map file that I can go back to time and time again to re-export should there be updates to the map file in the future.

Thank you for deciphering my presumably confusing post. You have solved my issue as I had misunderstood the relationship between a layout and my catalog.

Previously, I was going to the share > export layout each time I wanted to save a layout. This does "save" it but more or less as a template, one that is no longer associated to the catalog.

I will have to go through and recreate my layouts but thanks to your reply, this saves me from the confusion and headaches. Thanks!

I don’t think you need to recreate all of the layouts, just point the map frame to the correct map in each of your existing layouts. Just open each layout, look at the properties for the map frame, and select the original map you want it to point at.  I suspect that what you did was save the first layout file and then create 25 more layouts from that one, which automatically created a new map for each layout that was a copy of the original map that the map frame was pointed to. You probably have something like “Original Map” “Original Map 1” “Original Map 2” etc. etc.

another option that you should really consider is to use a Map Series.  I pretty much always do linear mapping, mostly for utility projects and I do almost everything using map series.  One map, and one layout that way.  If you want more info on that, let me know.

Justin - in looking in to this everything you suspect is completely correct. Thanks for saving me even more time!

Also, no wonder I was maxing out my CPU, as I more or less had 28 different map files, each a copy of each other with 50 or so layers, open simultaneously. Ah, beginner problems.

Definitely agree with @JustinJohnston , a Map Series will save you a hassle if you need repeat exports and your different layouts are all similar (except the map extent, of course).

If you don't have an "index" feature to base each page on, you can make a Map Series from a set of bookmarks in your map, too! Definitely an undervalued method for a multi-page layout. 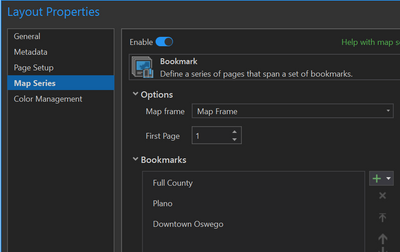 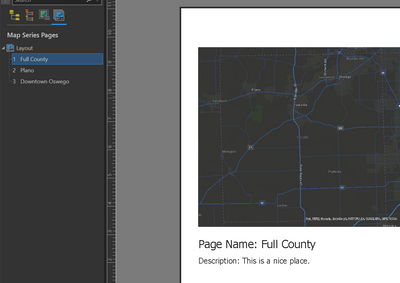 In addition to bookmarks, which I rarely use, another method is to create an index layer using the Create Grid Index tool.  You should create the grid index to fit the scale and dimensions of your map frame in your layout.  Then you move the polygons to wherever you want to fit your project.  This is incredibly helpful because I can use the grid index to create an overview "Index Map" showing what sheet the user needs to look at to find a specific location.  It also allows me to create match lines to line up the printed layouts/sheets, which makes it very helpful for knowing where to go next.

If all of this sounds complicated because you are new, please reach out to me through my website www.bigpineconsultants.com and I can walk you through my process.  All I ask is you give my company a follow on linkedin/facebook and maybe spread the word about our environmental, archaeology and other services if you get the chance.

An even better improvement would be if the tool could create a second feature class for match lines.  The Polygons have left page, right page, top page, bottom page attributes that have the labels you would need for the match lines, but doesn't create the match lines and I hate the look of keeping the outline of the polygons turned on.  As is, I create match lines manually as a second feature class.  I make a line feature class with "left" and "right" as attributes. I draw them in manually into the overlapping area of the polygons, then I add "left" and "right" label classes and have the label for each position selected as left of line or right of line pointing to the appropriate attribute.  I enter the left and right page numbers manually when drawing each line or by updating the attribute table.  The nice thing about doing it manually is that I can make sure it isn't hidden under the scale bar or north arrow.  It would be really nice though if the task was automated and then I just adjusted the lines after they were created.

Glad the Strip Map Index tool is working for you.  The GP tool creates and populates the field and the Map Series automatically uses the values for a field named "Rotation". You can set all pages to be "North at the top of the page" by simply setting the Rotation of the Map Series to use no field. 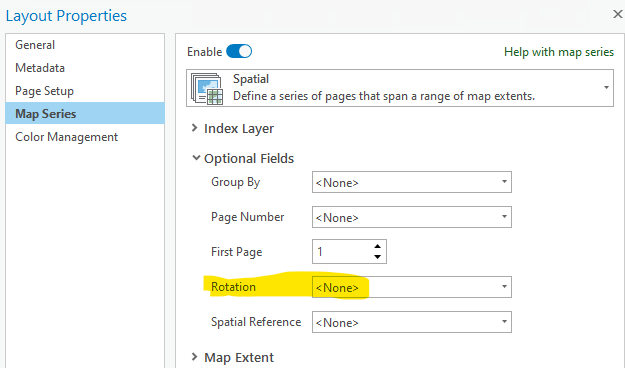 Once you do this remember to set the rotation for the map to 0.

Feel free to add your suggestion to Pro ideas.