ArcGIS Pro freezes when I add a map, or open a project that has a map already

So, I can open ArcGIS Pro and create a new project but as soon as I try to insert a map into the project it starts processing and then never stops. It doesn't crash and it doesn't exactly freeze either, as I can still click on buttons in the ribbon (ones that aren't greyed out) and move and resize the window. But other than that I can't do anything. Also if i open an existing project that has a map it also tries to process the map but doesn't get anywhere.

I'm unsure what might be causing it. I haven't been able to re-install the program as IT does that for me..

Has anyone else had this problem?

Do you have it set to use a basemap?  How's your internet connection?

What happens if you go to Map and Scene options and set Basemap to None?  Can you add a map now? 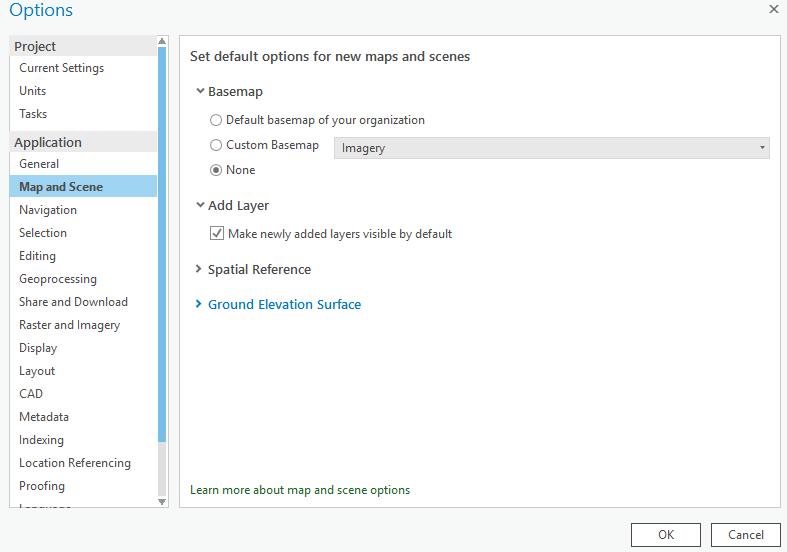 Thanks for replying. Yes I have tried that option, but then once I add data it starts processing again and doesn't stop. Internet connection is fine, so no issues there.

I might try and get IT to re-install ArcGIS Pro for me and see if that helps.

I am having the same issue as Georgia. I created a layout and map, which worked great, then I duplicated that layout and created a new map, but when I try to "assign" the new map to my new layout, Pro does just what Georgia described (just churns and I have to kill the Pro program). We recently updated to Pro 2.3.3 to see if that would help, but I'm still seeing the problem. I also tried to change the Basemap setting to "None", which didn't help.

Your situation is https://community.esri.com/thread/236789-crashing-when-changing-map-data-frame-within-a-layout, as for the OP's situation, I too am seeing this at 2.4, albeit intermittently: if I open a saved project where the project was saved with a map open, opening the project takes 2-15 minutes, regardless of the source data in the map, and all of the ribbon buttons are greyed out.

Very unscientific, but when I open a MXD, where all data sources are on a local (same subnet) file server (FGDB feature classes)....about 1:30 is when I can interact with the UI. 2.4, same mxd imported into a Pro project that ultimately has 55-ish maps and 30 layouts, but when I saved the project I had only one map open. Same data sources (remember it's the same map as above, modified in no way). About 2:15 ish just for the software to start and open...still can't interact with the UI until 2:50-ish..more than a minute longer than Arc. OP, I'm curious to see the output from https://docs.microsoft.com/en-us/sysinternals/downloads/procmon, set the filter to ProcessName = ArcGISPro.exe. In my example above, I see two obvious "waits": of 1,468,784 "events" related to opening this project, 978,862 are ReadFile C:\PROJECTS\TOPO_MAP_IMPORT\TOPO_MAP_IMPORT.aprx and start at 9:25:58 and end at 9:27:53 (about 2 minutes), and all the ones I checked were calling zlibwapi.dll, which is a packing/unpacking utility that I think is baked into Powerbuilder, which leads me to believe, in my I-have-no-idea-what-I'm-talking about decompilation of a software process, that some sort of decompression thingy is going on when the aprx is being read, and that's the performance hit. The other long wait was related to reads and writes to the FGDB (schema locks). Tried a new project with just that one map (again, same map, same data sources, no changes at all), same poor performance on opening. And yes, no basemap is the default,

I didn't quite figure out the issue. But it is fixed for me currently. IT (at my work) reset me login profile and that helped. They think there was a weird cached issue of somesort. it is now fixed and I will probably try resetting my profile again if this happens again.

Thanks for providing an update.

I would certainly update to 2.4 if you have had the chance yet.

You might want to try loading the ArcMon based upon this article here - Troubleshooting Performance Issues in ArcGIS Pro. It may help to uncover where Pro is struggling in the future.

Hey All! I know sometime has passed since this issue was raised but I found a solution to the issue (I had the same problem).

Then restart the program!