It took me a long time to figure out how to correctly edit a topology in ArcGIS Pro.  There are a few parts that made the experience more confusing that it should have been.

First,  It took me a while to find the official documentation located at https://pro.arcgis.com/en/pro-app/latest/help/editing/introduction-to-editing-topology.htm  Even then the documentation weighted editing edges instead of vertices.

Second,  When I did have a topology on I saw the modify edges tools,furthermore the tool as labeled "select and edge"  I did not want to select an edge, I wanted to select a vertex.

Third, When I opened "select an edge" I noticed that the vertices were in purple so I figured I had the correct tool!  However, when I tried to move the purple vertex nothing happened which reinforced my confusion.  I was not able to  move the vertex in a topology until after I double clicked on the vertex.

For the tools that can interact with a topology please consider the following changes (This example is for the Edit Vertices tool):

1) Change the option to select "Features or Edges" to "Feature or Topology."  When not using topology this particular tool can only modify a single feature at a time so the heading should be singular.  When editing a topology I personally thing the heading should be "Topology" not "Edge".  This would clarify the functionality for myself and perhaps others, not to mention what happens if a user wants to edit stacked points that are in a topology as there are no edges.

3) When I hovered over a point I noticed it was highlighted.  I tried moving it but nothing happened.  It was not until later that I realized that I needed to double click on the highlighted purple point so that it would turn into a green box which could be moved around.  Is it necessary to have an additional step to switch from the highlighted purple circle to the green box?

4) Maybe it would be useful to add an example of how to edit a shared vertex within the documentation?

Regarding #1, Our team will discuss this so I'll leave this idea open for feedback from other users.

Re: #2, we now have near-term plans to improve the discoverability of selecting nodes and edges.

Re: #3, perhaps we need some clarification from you. For working with nodes, if you are using Edit Vertices, it should work like this:

1. Select: hover over either a node or edge to show highlighting and then click to select either the node or the edge (you can also hold down N and drag a box to select just the node).

2. Edit: to move a shared vertex (node), hover over the vertex to bring up the move handle, and then move it.

The reason we need the two steps: the first click does the selecting of the edge or node, the second is for actually editing (selecting/adding/removing/moving vertices and segments - if you select an edge).

Re: #4: the next release of the documentation will be updated to include this information.

Thank you for the update.  Regarding number 3.  I was caught off guard by needing to click on the purple topology point so it would turn into the green edit vertex which in turn could be dragged.  Holding N down will be sufficient for me.

P.S.  Is there a way to disassociate a topology enabled point point from other existing points? In the example below I would like to move the endpoint of parcel A from the intersection of parcel B and C to the endpoint of parcel D.  I cannot just move the vertex as doing so will move the edge of parcels B and C.  I also cannot just turn topology off because my parcels have a topology that ensures that polygons are covered by lines.  The only way I know I can do this now is to:

2) Move the polygon vertex for polygon A.

3)  Move the two lines that are associated with polygon A.

I would like to know if there is a way to disassociate parcel A and the included lines so that I can move only the endpoint to point D without the need to disable and enable topology. 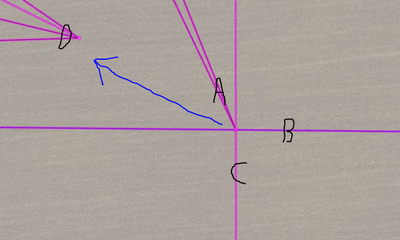 I'm unchecking the the topology elements that I don't want to edit.