We have a Ricoh Theta V camera that takes geo-tagged 360 photos.  When I use the GeoTagged Photos to Points tool in ArcDesktop, and upload them as points with feature attachments to ArcGIS.com, the photo attachment does not let you view the photo in a 360 "streetview" type viewer.  It just displays a flat warped photo.

Is there any way to overcome this obstacle, or will this feature be added to the ArcGIS.com platform soon?  These 360 cameras are cheap and becoming pretty popular.  It would be nice to have a built-in viewer in ArcGIS.com.

I agree that this would be super cool to see in ArcGIS.com and I would highly suggest you make an ArcGIS Ideas‌ for this to be reviewed by the Esri staff.

We also take a lot of 360 degree photos and here is how I show them to my customers: 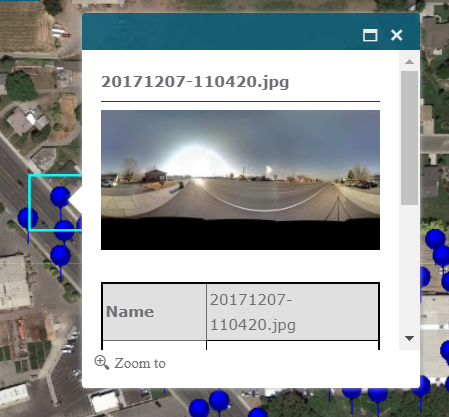 When I get some time and more knowledge in javascript programming, I am planning on making a widget in WAB Developer edition that will open the 360 degree image with the webmap, similar to Robert's Google Streetview. (I guess I had that idea over a year ago and have still not really pursued it.. but I will at some point!)

Thanks for your reply.  I see you are also doing some 3d Laser scanning too?  What are you using to host the 360 photos in your pop-ups?

i have also noticed that if you upload 360 photos to Google Photos and make the album public, when you click on the photo in Google you get a 3D panoramic streetview like viewer.  So I suppose another workaround would be to upload your 360 photos to a Google Photos album, then pass the individual photo links back to your ArcGIS.com feature attribute table, and build it into your pop-up.  Although i was hoping for a little more direct and easy solution native to ArcGIS.com without using programming or a third party software/service.  I hate standardizing anything on the Google platform, because the change the products left and right, and pull the plug on others (Panaramio).

Ideally we would like to capture our construction projects with photos at different stages and have an interactive ArcGIS.com map as the viewing interface.

I fully agree with you on the uncertainty of the Googles which is why I stay away from it. I have been burned too many times with Google changing their policy that I cannot trust Google for any semi-long term plan.

We simply use our website server as a host for our images. They're hosted raw there and then I use a service called Pannellum (https://pannellum.org/ ) to turn my images into a 360 degree sphere.

I'm implementing this for a personal project I'm currently developing. Here's a web amp in AGOL that has a point feature of my 360 photo/video sites: Umpqua River Basin Old Growth Timber Sales

I'm still fixing the popups so some of the links in the popup don't work but essentially the popup will provide you with a group list of photos or videos that are available for a given location.Some sites only have one photo so always try the link for photo 1 first. Anyways. the videos are hosted on Vimeo and the photos I am self-hosting. My point layer has 10 attribute fields that contain URLs to the 360 content (5 photos and 5 videos). The videos are straightforward- just open the Vimeo link in a new browser window. The photos have been a little work but I think I have a solution I'm ok with.

I'm using the Photo Sphere JS Viewer as the medium for displaying my photos. On my website, I have developed a bare bones HTML file "wrapper" that I pass a file name & description argument to it in the URL. The Javascript code parses that information out and then loads the 360 photo in the viewer.

Sure, it would be great if the AGOL popups supported 360 natively but this hasn't been too bad.

[The 360 photos/video were captured using a Garmin Virb 360]

Photo Sphere JS is cool. I might have to check it out. Thanks for sharing your map.

Thanks. Photo Sphere is pretty cool, straightforward to use once you add the additional dependencies (3 other JS files, really). The only catch I found so far is my attempts to have the sphere render images in a JQuery Modal dialog. It won't do it at first display but if you go fullscreen, it will have loaded. Maybe there's a way to do it but it's not a big deal for me (I'm ok with opening the content in a new window).

Wow, thank you for all of the great ideas everyone.  I really appreciate you taking the time to share your work.  I might get to the point of trying some of these out of necessity.  I was really hoping for native support by ESRI.  Because of the sheer volume of construction photos we could possibly take, the 360 photos work great to reduce the number of images you need to take.  I need something quick and simple that wont require programming or separate web hosting outside of ArcGIS.com.  I have also looked at using Mapillary, and Holobuilder but I would much rather use the ArcGIS.com subscription I already pay for, rather than subscribe to another service.  If I go out and take 500 pre-construction photos of a 10 mile water main, it would be time consuming to do any sort of manual linking of 360 photos to an outside source.  The Geotagged photos to features with attachements tools works great for this purpose, but is missing that last final piece with 360 photo support in ArcGIS.com.

Can anyone from ESRI chime in here on when 360 support will be native?

I agree that it would be nice to see native support but I feel like so many factors are at play with things like this. I have dealt with spherical images from a few different sources (or cameras) and they are not all the same. There seems to be a 'standard' kind of developing, and it's basically what Facebook will take since they do well with 360 degree photos. If you're outside that standard, then it's a bit of work to modify things to make the images work.

In any case, we have come up with a pretty fast process to throw 300+ images onto a map with spherical support that has streamlined things a lot.

1. Crews take the shots in the field and have each photo geotagged (with us, we have an external GPS unit that plugs in, but with many new cameras, this is just built-in).

2. I quickly throw the photos onto our website server - just a simple drag-and-drop, keeping the native name.

3. I use an open source program called ExifTool (ExifTool by Phil Harvey ) to quickly generate a spreadsheet that spits out all Exif data of the photos, including Lat and Long coordinates.

4. I modify the spreadsheet to add some project data and the linking variable for the Pannellum viewer (it's super quick with just an easy formula from Excel).

5. I throw the lat/long coords on the map (ArcGIS Pro), plot the points, then publish the data. I could stop here but have one more step.

6. In ArcGIS.com, I fiddle around with the popup to make it look nice, show a thumbnail, have a link for the image and that's it!

About 300 photos could take maybe 2 hours to do all this and most of that time is just uploading the photos to the web. (I suppose the step number 1 would take the most time since the crews are in the field, but I deal with steps 2 through 6, haha).

I much more prefer to use my own website for hosting the photos since I can get to them directly and quickly, with the extension intact (the .jpg at the end). ArcGIS.com hosting would eat up my credits for storage.

Did you try the GeoTagged Photos to Points tool in ArcGIS Pro?  Would that maybe eliminate the EXIF tool you use?