First, thank you to @MelindaMorang  for making these products and tutorials.

I'm having trouble creating a network dataset for Atlanta's MARTA system that will actually calculate walk + transit service areas. After I run the GTFS to Network Dataset Transit Sources tool using MARTA GTFS data from here, my LineVariantElements feature class is not a series of straight, 'spiky' lines. Instead, the LineVariantElements simply follows the streets like the MARTA lines do in real life. The image on the left seems to be what I need, but the image on the right is what I get: 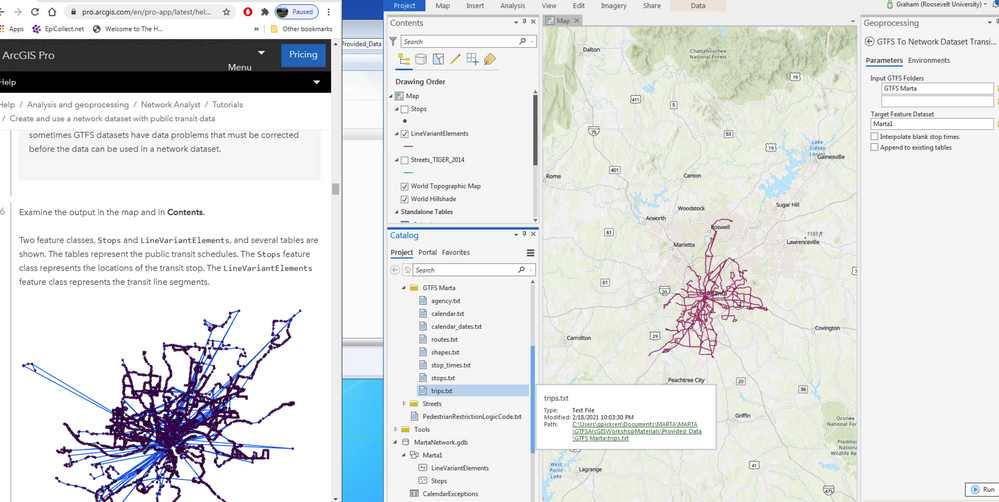 I don't see any problems with the GTFS data (no missing stop times) and the points seem to be generated correctly.

So, am I stuck with walking and driving analyses or can I do some things with transit travel?

Here's the attribute table of my LineVariantElements feature class: 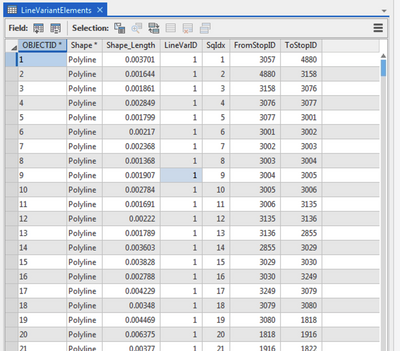 Hello. There doesn't seem to be anything wrong with your LineVariantElements. The GTFS To Network Dataset Transit Sources tool generates a straight line between each pair of connected transit stops. If your system doesn't have long-haul commuter routes from the suburbs to downtown, for example, you won't get long spiky lines. Instead, you'll just get a straight line that goes for a few blocks between stops. If you zoom in close, I'm sure you'll see that the lines do not actually follow all the curves in the streets and are probably offset from the street centerlines.

Whatever problem you're experiencing likely comes after this point, but I cannot quite tell from your description what's really going on.

If you're following the tutorial, you should have been able to create your network dataset from the provided template. Did that work? If so, that should have automatically created the network dataset with an impedance attribute that uses the "Public Transit" evaluator for LineVariantElements, and thus uses the public transit schedules for calculating travel times.

Please describe further the problem you're experiencing, and I'll do my best to help you sort it out.

Hi, sorry for the delayed response. It does seem like I was able to create a network dataset correctly but what threw me off was setting up the evaluators/impedances. This tutorial suggested I would get three preset options - Public Transit Time, Walking Time, and Length. I only got Length as a preset. I then just created a cost I called 'Transit' and selected 'Transit Evaluator' type for my Line Variant Element source. I guess this did work but in the moment I wasn't sure if it was created correctly. If that sounds right, please let me know! Thanks again!

If you followed the steps in the tutorial and used the provided network dataset template, it should have created impedance attributes called Public Transit Time, Walking Time, and Length. I don't know why it wouldn't do that. That seems weird.

You can certainly configure those attributes yourself according to the needs of your analysis. You need to select "Public Transit" as the evaluator type for the LineVariantElements source. You also need to configure a walk time calculation for the Streets source.  If you need help with that, the best thing to do is contact Esri Support. they can figure out either a) why the tutorial steps didn't work for you or b) help you figure out how to configure your cost attributes correctly if you're setting things up manually.

Correct, I selected Public Transit as my evaluator type and used Length/80 as my cost for the Streets.