Tips for importing large amounts of CADD data into ArcMap

I work at a utility coordination company and although I have a background in coding and computers I'm brand new to ArcMap and GIS so I apologize if I come across as a little oblivious. Basically, I am trying to import a ton of CADD data into ArcMap and hopefully turn it into a geodatabase or shapefile. But, when I try to import all this data into ArcMap. It just freezes up and lags very badly. This is an issue I have been having in general with ArcMap and I suspect updating the company computer to Windows 10 will update some of the drivers and potentially help with this, but I am curious if there is a better way? This is a lot of data (around 2 GB) but I am sure this has been done before successfully. Any help I can get is appreciated.

I have spent most the first 13 years of my GIS career (at this job) converting AutoCAD drawings of electric distribution systems to a working ESRI GIS.

Bringing a CAD dwg into ArcMap should not cause it to freeze up. Granted 2gb is a large DWG.

On a copy of your drawing.  Clean it up first.  I cannot remember the CAD command any more but there is a command to clear out and clean up the drawing and get rid of fields that are not being used anymore.  it is has an effect it will make your drawing smaller.

But if your having the issue with the computer lag in ArcMap in general upgrading the OS won't make much difference. What are your computer specs?

Using explorer how much HDD space do you have?  If it is less than 10% you need to clean some out.

Hi Robert thanks for the response. Just to clarify I am not using .dwg files, I'm using .dgn files. This may not make a difference, but just so you have more information. Also, this is not one file, it is a folder of a couple hundred files that I am attempting to convert to geodatabase using the "CAD to Geodatabase" command. Processor: Intel I5 with 2.00 Ghz, RAM is 8 GB, GPU: Intel HD graphics 4600. HDD is more than 50% full and all of my files are located locally on the computer.

You don't have the GPU power.  What you have is more built for people on MS Office and general computer use and web browsing.   The integrated Intel graphics, while very good, are not meant for these types of applications. It does not take much of a card but it normally takes more than Intel Chipset

Do you know if all of your drawings are identical in layout.

Meaning are all layers named the same?

However, at the end of the day converting AutoCAD to GIS is very time consuming and can be frustrating.  No matter how good the CAD person thinks they were there will be a number of issue.

As example. I have converted Electric Distribution.  Quite often someone will want to change a line from A phase to B phase.  They should change the layer the line is in, but they just change the color for that line.

Interesting I did not consider the GPU being the issue. Because of the naming protocol of my company, all of the files have the same name (i.e. all subsurface utility surveys once processed through microstation are given a name to distinguish them as the subsurface utility file within the project folder).

I have a laptop with 8GB RAM, 246 SSD, 4Ghz intel i7, with a NVIDIA GeForce MX150 graphics card. Could I potentially run this better on my laptop than on the desktop computer?

Other than the RAM that is more computer then I am using right now.

Ok this explanation may get a little confusing but I will try my best.

I would suggest making a Model to import a single drawing. 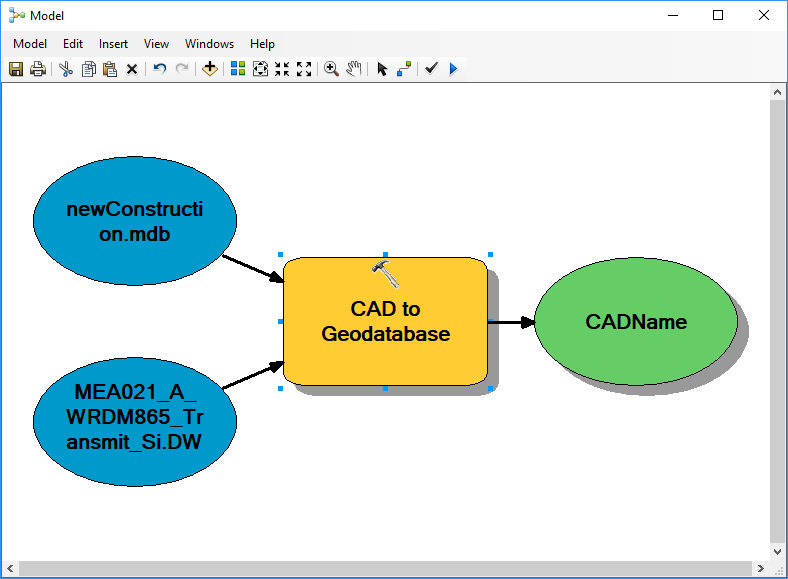 Top left, NewConstruction is a database

MEA... is the drawing

CADName is the name of the FeatureData set that will be created in newConstruction that will house this drawing.

One of the issues is that the CAD To Geodatabase will name all points as Point, Lines as Line etc

Test the model to make sure it works.

Export the Model to Python

You see the name of the drawing, It appears in multiple formats.

MEA021_A_WRDM865_Transmit_Si.DWG  Change everything before the .DWG (or your extension) to CADDwg

at the bottom of the script add

remove the extension and paste them all into a column in table in MS Access.

remove the red items and blank lines from the script and paste it into a field in a different MS Access table.

Make a new table in Access from joining the two tables

Use the replace function to replace CADDWg with the name of the drawing, minus the extension.

You should now have a series of scripts to import the drawings into a single database.

Put the script back into python.

The Del functions clear out the previous use of the variables so they can be used again.

Sounds like hooey but I once received 4500 stakeout drawings that had been converted to file geodatabases and had to work out a way to get them all in one database. I then created another series of scripts to append them all into one.