I am trying to import some building floorplans into a Pro project.

The doors labels 001A and 001B are present in the .DWG file (below, black background) but missing when imported into my Pro project (below, white background).

There are several other doors present on the A-DOOR layer in autocad which are imported as they should, so it's not like the entire layer is failing to import... just a few objects. I have found this to be the case with a few other building plans I have as well.

What might cause some layer objects to not import into Pro?

Are the objects missing blocks or just lines?

This could be caused by importing a point object feature and line features on the same layer.

@Maxwell_Jay_iastate, are your doors on a polygon layer or polyline or both? My guess is that the ones that imported in correctly are closed polylines in CAD or unclosed. And then the ones that didnt come in are the opposite? Youd know in the quick properties in autocad.

The doors that import properly have these properties:

The doors that don't import properly have these properties. 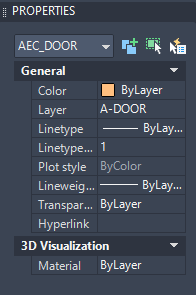 What is Block Reference vs AEC_DOOR  ?  I am not an AutoCAD user.

Can I somehow change the other doors to Block Reference from AEC_DOOR? I am not an AutoCAD user...

I believe a block reference is a user created block(symbol), where as AEC_DOOR (symbol) is a block from Autocad symbol library.

You can change out the AEC_DOORs by coping one of the others. You may need to use the mirror command and rotate the block to match the AED_DOOR. then just delete and try your import again.