I am trying to disable the "Update Point" of my editable layer in Collector but unable to do so.

I made sure that when I published the feature layer from ArcMap, operations allowed in the Feature access settings are: update, sync and query. 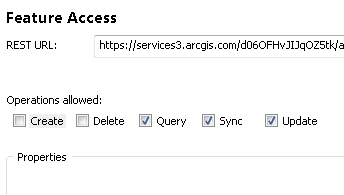 But still when I open the map in Collector, the "Update Point" button is still there when I go to edit mode. What step am I missing here? I am introducing Collector to field people who are new to the technology, and I do not want them to accidentally update the position of the point data on the map, we only intend to edit some attributes.