Lot setback by given distance

I want to apply my rule which is every north edge setback to south to each lots in a specific area.

For that, I tried to make it with Setback operation and Translate operation but I realize the operations can’t cover that I want to make it or maybe I just don’t know what is the way.

So, please review my 2 questions as below and let me know how I can solve the problems!

By using [selector (world.north)] of [setback operation], I was trying to find answers but it couldn’t bring me successful result.

And I guess the reasons are as below.

First, the setback operation only recognized [North] as a single edge according to the shape (or direction) of the lot. (Fig. A)

Second, offset is performed to [vertically (90°)] from [ North edges] But actually what I want to make it is offset [vertically (south)] from each [North vertices].

So, I make lot moves the given distance to the south direction and the result seems that correctly move to right direction and distance. 😊 (Fig. B)

However, the lot (blue) is over the range of the initial lot (red), so it can not be used to my study.

My original goal is to select (recognize) the hatched area in Fig. C and script a rule based on it. 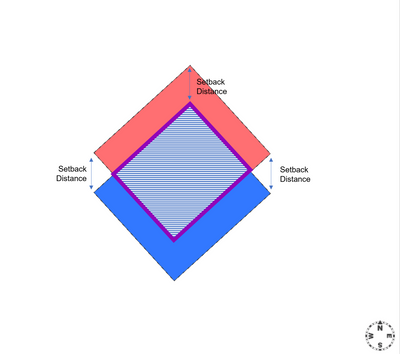 My CGA code is below :