GIS analysts have become the default cartographers for some organizations. The primary task of a cartographer is to simplify reality in such a way that maps can convey the maximum amount of information with a minimum amount of clutter. Accordingly, analysts have been required to develop datasets and layers that work at a variety of scales. Street datasets are particularly troublesome. Detailed road inventories are ideal for large scale mapping, but individual roads quickly turn into indecipherable blobs during the visualization of large cities and regions. Over the years, a combination of definition queries, scale range settings, and creative uses of symbology have been employed to create road basemaps that work at a variety of scales. 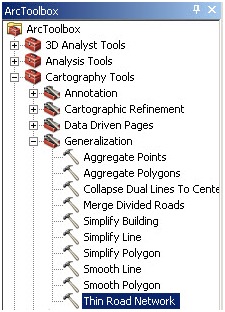 The Thin Road Network tool (Cartography Tools/Generalization), available in ArcGIS 10, provides another method for the digital cartographer to simplify a street feature class, while maintaining the integrity and connectivity of the street network. The tool can pare a detailed street’s datasets for medium scale mapping of urban areas. The tool does not actually delete features—instead it identifies road segments that could be removed from the map without compromising connectivity or removing high-order routes.

Preparing the Streets
Slight modifications are necessary to prepare the street data for use as an input to the Thin Road Network tool.

Executing the Thin Road Network Tool
Running the Thin Road Network tool requires a Minimum Length parameter to be defined. This parameter defines a “sense of the resolution or granularity of the resulting simplified road collection (ArcGIS 10 Webhelp).” This value should represent the minimum length of road that is significant enough to include in the final map. The value is dependent on the desired scale at which the road layer is meant to be viewed. The tool will place a value of 1 in the Invisibility field based on an analysis of hierarchy, visibility locking, resolution, and the morphology and connectivity of the road geometry. 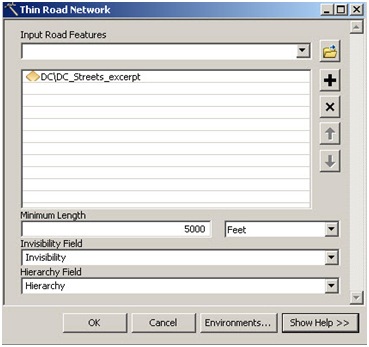 Time Considerations
The structure and size of the street's feature class that is used as an input, in tandem with computer specifications, will determine the time it takes to run the tool. With large datasets, it can take quite a while. For instance, in recent testing, the Thin Road Network tool ran for 30 minutes on 170,000 road features representing the greater Washington DC urban area.

Results
The following graphic contains two maps. The first map contains all of the streets in the Greater Washington Urban Area. Streets in this map are not well defined and run together to form amorphous gray spaghetti-blobs. The second map shows the same street's file after the Thin Road Network tool has identified superfluous segments that are hidden using a definition query. This map is more legible. Routes can be easily distinguished from one another. While this dataset cannot be used at all scales due to the many ensconced collector streets, it will serve as an effective basemap with more detail than a road's layer that just contains interstates and freeways. 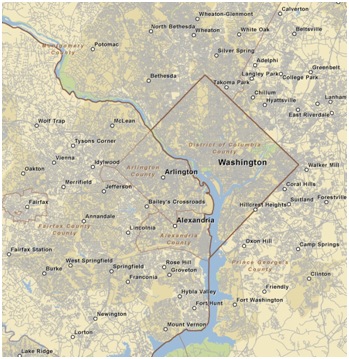 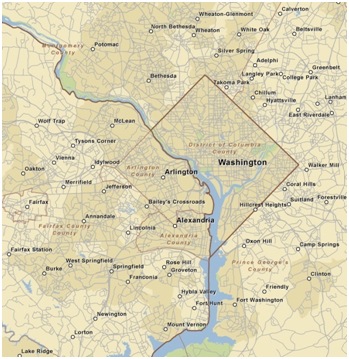