With fiery lava flow from Hawaii’s erupting Kilauea Volcano prompting urgent evacuation orders, one might expect the last thing on residents’ minds would be cleaning house. Yet, many locals of Leilani Estates, a neighborhood now mostly destroyed, not only took the time to clean their homes, they also did extra gardening, planted fresh flowers, and left offerings to honor the volcano that was threatening their homes.

This last-minute preparation paid respect to Pele, the Hawaiian volcano goddess. Kilauea Volcano continues to wreak havoc in spectacular fashion, spewing billions of gallons of molten lava across the landscape of Hawaii’s Big Island and into the ocean. But the Hawaiian people are pragmatic and accepting, viewing Pele’s activity as part of the natural process of destruction and creation that forms the Hawaiian Islands. They clean their homes to return them to Pele in a good state, since they believe she gave them the land in the first place.

This ongoing eruption of the Kilauea volcano, which started in early May 2018, continues to shock geologists. The U.S. Geological Survey (USGS) notes that such an event is unprecedented in the past 200 years, and there’s no telling how much longer it will continue. Already, the Halemaʻumaʻu crater has grown to seven times its previous size by volume, creating almost 700 acres of new land. Hundreds of homes have been destroyed and more are still at risk. Yet, the threat to lives has ebbed significantly since the early days of the eruption when evacuations and search and rescue operations, including a drone strike team, went into full force. 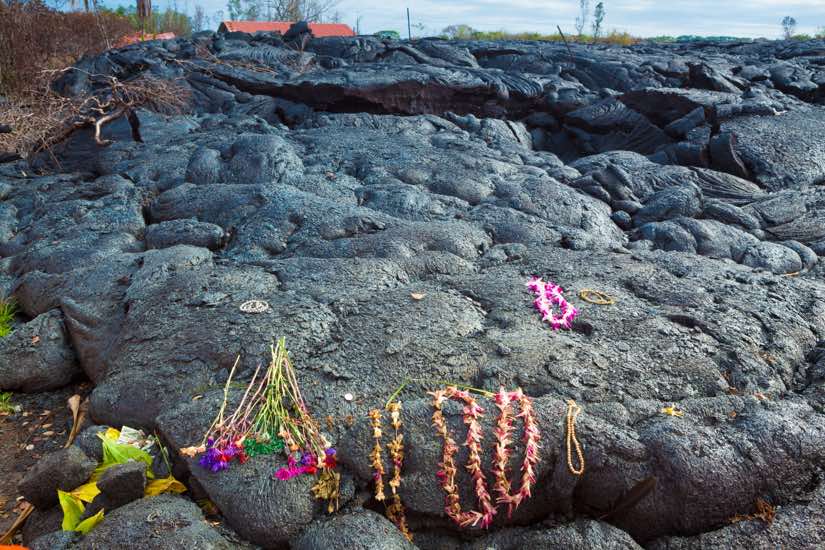 The Hawaiian people pay homage to Pele, the volcano goddess, by leaving offerings to be burned up as the lava advances.

Among those responding to the volcanic eruption were a new breed of emergency responders: robots from the Center for Robot-Assisted Search and Rescue, or CRASAR. A five-person team of highly trained volunteers from CRASAR deployed to Kilauea a few days after the eruption. They brought a fleet of small unmanned aerial systems (sUAS), commonly known as drones, to assist in the rescue operations.

CRASAR, a nonprofit organization, champions the use of small unmanned vehicles in emergency response. Disasters present dangerous and sometimes life-threatening scenarios to first responders. Disaster robots can go where people or emergency response dogs can’t, minimizing the risk to life. CRASAR assisted at the World Trade Center on 9/11, and since then has supplied robotic assistance for 28 disasters including earthquakes, building collapses, floods, nuclear accidents, tsunamis, and underground mine explosions.

Kilauea provided a new challenge to the team, and they executed the first known use of drones in emergency response to a volcanic eruption. While drones have been used previously to map volcanoes, CRASAR’s fleet was the first to use them to officially aid disaster response. The team’s participation also freed up drone resources from the University of Hawaii at Hilo to focus on geological observations during those crucial first days.

Breaking this new ground made an impact on the experienced team. Justin Adams, president of CRASAR, described their encounter with Pele vividly:

“It was unique. I’ve never dealt with lava before. None of us have. We’ve dealt with mudslides, and we tried to compare it to mudslides. But just the color of the lava, the sparkling of it burning up the vegetation and trees, looked like blood flowing down the side of the mountain. It looked like arteries because of the way it was pulsing.”

Over a six-day period, from May 14 to May 19, CRASAR flew 44 drone flights, 16 of which happened at night. These missions were invaluable, since manned aircraft such as helicopters were prohibited to fly at night. The crew staged the drone flights from restricted-access roads near the volcano, driving their vehicle through the eerily quiet evacuation zones and moving locations often to follow and map the lava flows.

During these flights, the drones were outfitted with thermal sensors. They identified a new fissure (Fissure 8, which continues to expel lava months later), mapped the lava fronts using thermal cameras, and provided data to the USGS to help determine the speed of lava flow.

To capture the data, a drone would hover above the front edge of a lava flow, take an image straight down, and note the GPS coordinate of that image. Several minutes later, the drone would follow the leading edge of the flow to its new location and repeat the procedure. This was a much safer maneuver than previous USGS data collection, according to Adams.

“They had been gathering data by a person getting close to the lava, taking a GPS coordinate, waiting, and trying to walk down in front of the lava flow to take another GPS coordinate,” he said.

In one daytime mission, emergency personnel received an alert that someone might be in danger in an isolated house. One of CRASAR’s drones quickly deployed to verify. Known as “ground-truthing,” emergency responders must validate the accuracy of incoming information, especially when it can mean the difference between life and death.

“Citizens were calling in reports, so first responders called CRASAR and we had a strike team that would go and do validation of air quality, lava flow, or lava extent,” Adams said. “We acted as an on-demand task force crew.” 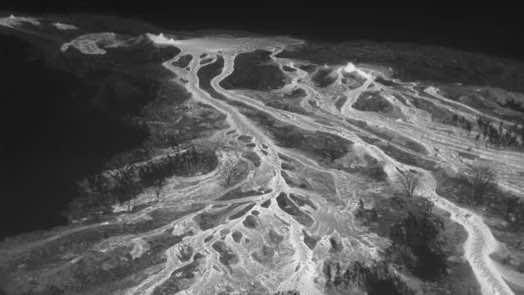 The CRASAR team used a thermal sensor to map the lava fronts, cutting through the smoke to show the lava extent.

Many factors contributed to the effectiveness of CRASAR’s efforts during the emergency response. Three stand out: technical and scientific expertise, disaster training and experience, and specialized software.

The CRASAR team members’ expertise fostered good communication with other first responders and the USGS. Their scientific backgrounds allowed them to speak the same language as the scientists and engineers involved.

Experience with previous disasters prepared the CRASAR team for Kilauea. They knew which questions to ask in an emergency and what their drones could do to assist the operation.

Finally, they used specialized software to automatically tag images with their locations. They visualized the information in real time on a digital map by using geographic information system (GIS) technology. They employed another application to take panoramic aerial photos automatically instead of manually, expediting situational awareness.

“CRASAR has equipment and technology that was placed above what we’re used to,” said Christian Wong, Executive Director, Hawaii Science and Technology Museum. “In particular, their capability to do 360-degree views of an area very quickly. They used a lot of pre-programmed applications with their drones that are able to do certain tasks that normally, if you relied on a pilot, might take a little while to get done and it wouldn’t be as efficient.”

Next steps for Kīlauea drone response

The CRASAR team’s work was a success. They reduced cost and risk, and increased situational awareness for all involved responders, government agencies, and the public. The team hopes this will build support for future use of robots in disaster response and public safety.

While CRASAR has completed its official operations in Hawaii, the team remains on standby, communicating with first responders often and ready to deploy again should the situation change.

The work of drones at Kilauea continues with the University of Hawaii at Hilo performing daily monitoring of the eruption, as reported by CNN. The drones provide a reliable stream of visual information helpful in communication with the public during this kind of emergency.

“The visual data drones collect is very useful in helping show the people why they’ve been evacuated from certain areas,” Wong said. “Once they see the devastation and damage, they understand why they cannot be let back to their homes.”

Wong noted that CRASAR’s participation had an unexpected outcome. It inspired local students from Hawaii’s Big Island to start creating their own disaster robot designed specifically for volcano response.

While the Hawaiian people feel Pele will always be unpredictable— taking and giving land according to natural cycles—emergency responders and scientists can now fly drones above a volcanic eruption for a safer way to observe and measure her awe-inspiring power.

Learn more about how drones are being used for social good and humanitarian missions in this Esri & The Science of Where Podcast.