In a separate blog post at the ESRI Education Community, I investigated a claim that Bouvet Island is the world’s most remote uninhabited island using ArcGIS. At the same time, I mentioned that the definition of “remoteness” is subjective and therefore makes for an excellent classroom discussion and for investigation using GIS.

If you’ve flown to Hawaii, you may have been amazed at long the flight is, and wondered whether Hawaii is halfway across the Pacific Ocean. The Hawaiian Islands is the world’s most remote island chain with a sizeable population, estimated at 1.288 million in 2008 (US Census Bureau). Honolulu is the most remote major city over 500,000 population, because the nearest city of equal or greater size is San Francisco, 3,841 km distant.

Using ArcGIS and data from Book 2 of the Our World GIS Education series from ESRI Press, I set the data frame to Orthographic, centered near Maui at 21 North Latitude and 156 West Longitude so that I could see most of the Pacific Ocean on the map image. 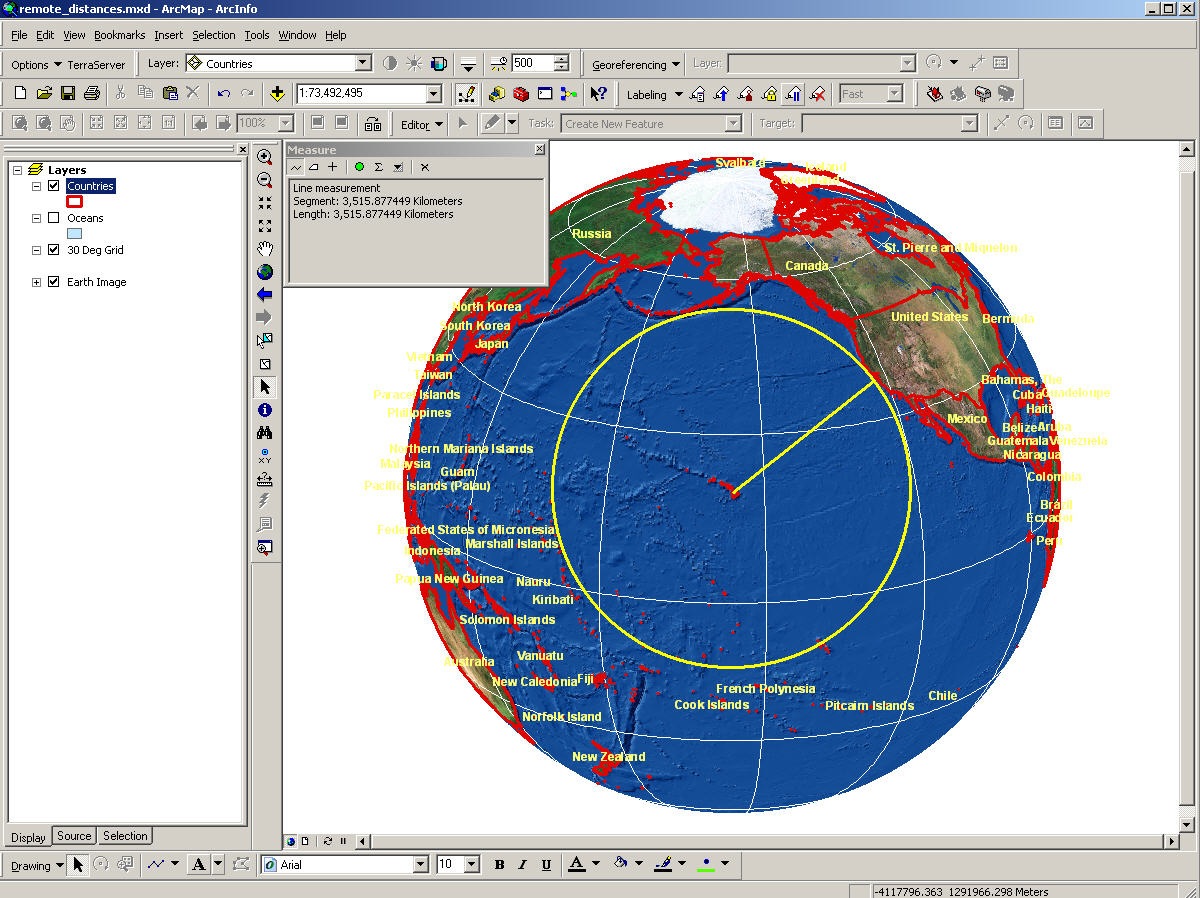 Which is closer to Hawaii—California or southwest Alaska? Using the circle tool, above, I found out that these two are just about the same distance away—3,515 km. This is approximate as the measure tool was used at a small scale.

Is Hawaii halfway across the ocean? A visual assessment shows that this depends on the point at which one measures, for the Hawaiian Islands extend for hundreds of kilometers—over 1,000 including the seamounts. The southeastern inhabited Hawaiian islands are not quite halfway across the ocean: I measured with ArcGIS about 4,800 km from Hawaii to the nearest point on the Asian continent at Kamchatka, and 5,800 to Australia. Vladivostok (5,500 km) and Shanghai (6,400 km) are both farther than Kamchatka, and all are farther than North America.

A discussion about map projections, distances, and error is most appropriate here, because the measurements differ by up to 1,000 km depending on the map projection used. Try these tools to investigate other islands!